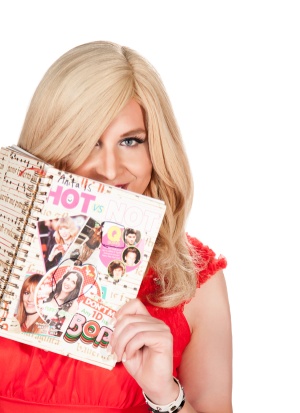 I knew you for over a year as Anita Goodmann, feisty blond drag queen, before I ever met you as Timothy Thomas, normal-looking white guy. When you told me you were straight, I almost didn’t believe you. How does a hetero male find his way into drag?

In my case, it was winning a costume contest dressed as an old lady when I was in fourth grade. I basically fooled everyone until the last possible second. Then I was suddenly recognized by one of my teachers and awarded first place. After that, for whatever reason, no one ever cared if I dressed in drag for things like Halloween, school spirit days like “Opposite Sex Day” or what have you. Strangely, my peers would get disappointed if I chose not to do drag when the opportunity was there, so there was never any stigma around it (other than me kind of wishing it wasn’t the case because it was so offbeat). It is one of those things that found me and wouldn’t disappear—even in bands I got better responses when I glammed up as lead singer. I happen to look good “in face.” It’s what I was meant to do. My life got exponentially better once I accepted it and gave it life through Anita Goodmann.

You’ve said that some drag queens and others in the gay community are offended by the existence of a straight drag queen. What are their reasons?

Firstly, this would be a very small number of persons – the top cabaret drag performers in Seattle have always treated me well and with great love and respect and we have wonderful working relationships. I owe a lot to ladies like Alexa Manila, who is simply wonderful, Sylvia O’Stayformore who has put me on the bill at Bacon Strip many times, Ben DeLaCreme, who is consistently great, and of course ladies like Roxy Doll over at Neighbors. Roxy has basically run an open boot camp for drag queens for two decades, and it was the first place I got stage time as Anita back in 2006.

My business card says “Professional Female Impersonator,” but I don’t control what comes out of other people’s mouths or what they “get” as far as putting a name on things. I could come up with a bunch of nuanced stuff about being a performance artist that plays with gender perception, but most people would still call me a “straight drag queen.” What can you do?

I can understand how some people might feel that the title of “drag queen” requires you to be openly gay – after all, drag queens led the Stonewall marches to stand up against police oppression, and of course it makes no sense to run for a place in the Imperial Court unless you are part of the gay community. If there was more awareness in the wider world about appropriate labels there might be other options, however “straight drag queen” has a lot of traction with most people because it’s simple and broad.

What do you say to people who don’t think you are a “legitimate” drag performer?

I think they have very narrow definitions of “legitimate” and “drag.” “Legit” performers get paid for what they do, and “drag” means “Dressed As A Girl,” so as far as I’m concerned I’m about as legitimate as you can get.

Anita Goodmann is a vehicle I use for comedy, social satire and to get my “glam” on. It’s a way to have fun and play with conventions in both the straight and gay communities. It’s easy to get wrapped up in identity politics when, ultimately, we’re just providing entertainment. I have a pretty face and I want to use it to have fun and express some ideas, both poignant and funny. 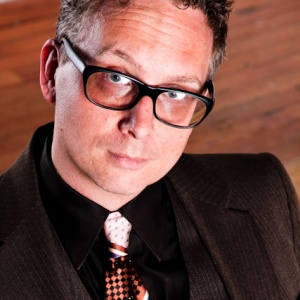 There’s got to be something about you that is not, shall we say, strictly heteronormative. Where would you place yourself on the Kinsey scale? How is your drag persona different than transvestitism?

I suppose one could argue what I do is some form of cross-dressing or transvestism. Those terms carry a lot of baggage and are focused on gender identity issues and sexual turn-ons (by the way, just because you’re gay doesn’t mean you can’t also be turned on by women’s clothing—you might not do drag and still enjoy it). I go out as Anita for the rush of performing and getting away with something that’s edgy and maybe a little taboo. It’s most fun for me in the times before and after being on stage when I’m blurring the lines between life and theater. I strive to be glamorous, classy and fierce, and to highlight what I think are great qualities I like to see in the women I meet. Also, I will go anywhere as Anita—I’ve sung karaoke at the Baranoff and partied at Earl’s on the Ave. I’m fearless.

As far as being heteronormative, I like to tell people “I’ve tried it all and made up my mind.” I’m probably somewhere between a one and a two on the Kinsey scale. Shit happens. I guess if someone is curious, they should get to know me. Part of the fun is in creating gender distortion—it’s where I get most of my material when I do stand-up comedy, having experiences both as a man and a woman and then comparing and contrasting them. I got my start hosting burlesque shows so I’m pretty blasé as far as seeing a naked woman goes. Nudity is not the same as being sexual.
All my long-term relationships so far have been with women. I’m comfortable in lots of sexual situations, even ones that aren’t absolutely “heterosexual.” I guess you could call me “hetero-lesbian,” “heteroflexible” or maybe even “queer.” If I don’t like a person, it won’t matter anyway. I’m all about the relationship and not the label. Like anyone, I like to keep my private relationships private.

You’re mounting a show in February. How did that come about and what do you have planned?

The show is called The Secret Diaries of Anita Goodmann: True Stories from the Queen of In-between. It’s a storytelling show filled with real-life accounts of things I’ve done and stuff I learned. I’ve relentlessly documented my entire career performing as Anita, so I’ll be sharing some archival video from early performances with updated commentary (like the time I punked the holiday party of an employer who asked me to perform as Anita when I knew full well I was only a couple weeks from getting sacked). It has some animations explaining my observations about male and female cultural communication. It will be filled with confessions, comedy, tragedy, songs and a question and answer segment called “Dating Advice For Unicorns.” I can tell you it will be a good time—just leave your preconceptions at the door and enjoy the party.

The Secret Diaries of Anita Goodmann runs Feb. 7-9 at the Ballard Underground.