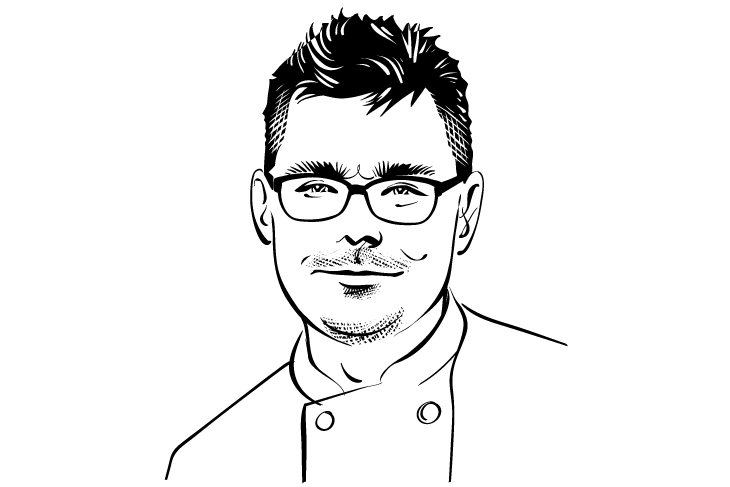 When Jason Stratton suddenly stepped down from his three popular restaurants in February, the lauded chef shook Seattle’s culinary scene. Spinasse and Artusi, two side-by side Italian trattorias that Stratton launched on Capitol Hill, are longtime favorites, but the ill-fated, Spanish-inspired Vespolina (née Aragona) was the apparent impetus for his departure. Seven months later the dust has settled and the 35-year-old has been named general manager and executive chef at Mamnoon, another Capitol Hill gem, and recently announced his spot as a contestant on Season 13 of Bravo Network’s Top Chef. I chatted with Stratton about his background, his tumultuous past year and Mbar—the South Lake Union rooftop restaurant from Mamnoon’s owners where he will serve as executive chef in 2016.

How did you first venture into restaurants? What is it about food that first attracted you?
I basically got into restaurants because I was looking for money. My high school art teacher was good friends with Bruce Naftaly, who owned Le Gourmand in Ballard. He’s legendary in shaping Northwest cuisine. At first he was reluctant to hire me, he didn’t even trust me with the dishes! I’ve always been a serious, inquisitive person, so I picked up a lot by watching—eventually Bruce let me wash lettuces and make salad dressings, and within a couple of weeks I was learning how to butcher rabbits and ducks, then entry-level pastry stuff. I was blown away by the food he was producing. It was a very influential start.

You were a semi-finalist for a James Beard Award and Food & Wine’s Best New Chef at a young age. Did you feel a lot of professional pressure?
Not particularly. I went through a period where I was hard on myself and in turn very demanding of other people, and that can be a vicious cycle. You can get good results by freaking out and being a crazy person in the kitchen, but at the end of the day it’s just food. I don’t know that that kind of intensity gets the best results, and over time the aspect of pressure from the industry wasn’t as important to me.

And yet by your early 30s you built up a small empire of local, acclaimed restaurants. Why did you suddenly walk away?
The whole experience with Aragona not being the success I wanted it to be was hard to take. It took the wind out of my sails in a way that I wasn’t expecting. It’s a difficult thing to be creative person while also being a businessperson. I loved going to work, I loved cooking, I loved my restaurants, but I felt that when it came to the creative process there wasn’t a lot of joy left for me.

The day before I was going to tell my investment group that I was stepping down I got the call from Top Chef. I had already made the decision to step down, it was absolutely the move I wanted to make, so it was a very strange coincidence to get that call out of nowhere.

What can you tell me about your time on Top Chef?
I can tell you that I was on Top Chef (laughs).

You’ve hopped between various styles of cuisine, from Italian to Spanish to Middle Eastern.
I have a point of view grounded in the Northwest and in the rustic country experience. For my final project in college I had an opportunity to go to Spain for a research project in poetry. I was blown away with the food culture and how food was so involved in daily lifestyle in a way that made sense to me. Italian and Spanish cuisines have a lot of similarities when it comes to technique, so to me it didn’t seem like that much of a stretch. As far as Mamnoon, there is a lot of overlap in technique as well. There are a lot of the same ingredients and products. I’m putting myself in a vulnerable place but I’m learning new things every day.

What can you say about Mbar?
We’re still in the planning phases, but the idea that we’re starting with is creating a dynamic social space with the beautiful view and delicious food. The flavors will relate to Mamnoon, but it will be its own space. It is still somewhat unformed and I’m kind of excited by that. I’m enjoying the process of exploring what this restaurant will be.