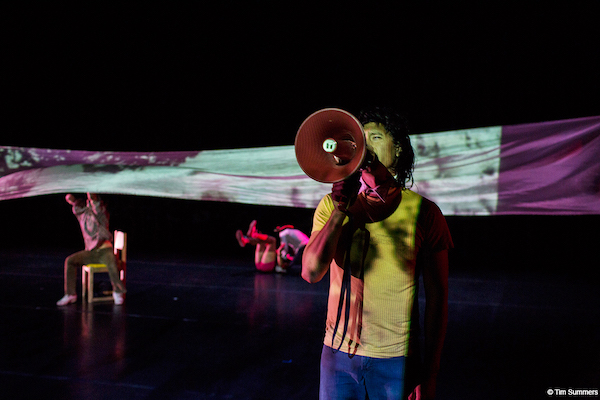 A figure, draped in a sheet like a Halloween costume ghost, makes its way to the middle of the fifth row of seats in On the Boards’ mainstage space. It stands until the room quiets, all eyes trained and waiting expectantly, before crawling down backwards to the stage, finding footing on armrests, worming between audience members who lean back to make space. This opening image is the last we get to fully digest in a 70-minute performance; the rest of A Great Hunger is a wild ride.

Jessica Jobaris & General Magic’s new show, which ran last weekend at On the Boards, is like a three-ring circus of overlapping vignettes. Two dancers, one wearing a pirate hat, run and jump at each, partially obscured by a projection of running water. Then two women chase each other with chairs, while upstage a line of naked dancers hump the floor. There are pies to the face, incoherent speaking into megaphones, and snippets of standard modern dance moves mixed with mimed masturbation. The music, from “Turn Down for What” to “When You Wish Upon a Star,” covers a broad range of pop splendor. The 21-person cast, in all states of dress and undress, create a barrage of images: many humorous, some stunning, all adding to the chaos.

Much of the show flips rapid-fire between funny absurdity and darkness. Ariel Burke collapses into very convincing sobs that quickly morph into deep belly laughs. Dancers make goofy displays of killing themselves with toy swords and pistols, accompanied by the rest of the cast on classroom instruments. Later they line up at a microphone, each speaking a confessional punch line: “I’m scrubbing the toilet with your toothbrush.” “I’m cutting your name into my flesh.” “My stepfather has cancer, and I’m okay with that.”

It’s a treat to watch the enormous cast (so many naked bodies!), especially since it features beloved veteran Seattle performance artists such as Sruti Desai, Hendri Walujo, Nikolai Lesnikov and Rosa Vissers, among others. Burke’s performance is particularly entrancing. Her eyes, framed by her mane of red hair, contain at once a dreamy detachment and a piercing intimacy. Her rich singing voice wails, “We’re all carrying the same pain,” and we’re drawn in like moths to a flame. Amelia Reeber also makes a notable and hilarious appearance as a gold-lame-track-suited rock star character. With swagger to spare, she lounges on a pile of naked bodies and chews on a cigarette, zero fucks given.

In a broad sense, Jessica Jobaris’ work is an amplified version of the messy, out-of-control emotional chaos particular to the human experience, but beyond that it’s hard to pick out a coherent meaning. A theme of hiding and exposure is prominent: dancers covered in sheets, half hidden behind curtains or facing away from the audience are contrasted with nudity and sexually vulnerable material, like when one dancer tries to fit her whole hand in another’s mouth.

The images themselves are potent, but the constant bait-and-switch of tragedy and humor creates a numbing effect. We stop emotionally investing in these characters when we know in 30 seconds something else will be happening. The exception is Tyisha Nedd’s persona. She spends the piece crashing bikes, punching through Styrofoam, and even announcing that she likes destroying things, so her character stands out for having an identifiable motivation that continues section to section. Immediately I relate to that desire, I am rooting for her, and in the final image when she singlehandedly topples the set’s back wall, I understand why it’s happening.

Which brings up the question: outside of narrative, how can an audience find attachment? For this kind of work to be emotionally moving, an empathetic bond needs to be created, which is why it doesn’t help when shock value takes the place of actual vulnerability. The dancers are vulnerable in their literal nakedness, of course, but even that becomes a tool of provocation rather than an opportunity for honesty. In the aforementioned line of confessions, there seems to be no intent to portray these statements as the dancers’ own truths. When saying something shocking, is there really anything at stake if it isn’t true? Confessional art has little power if it isn’t actually confessional. Instead of empathizing with these bodies, we trust them less.

While the piece could have benefited from some editing for deeper emotional impact, there is something about the “more is more” philosophy that speaks to the hyper-consumption that both drives and overwhelms many of us. Instant gratification makes for high entertainment, and while some might see that as a fault, I enjoyed enjoying myself. As much as I love and appreciate experimental performance, how often can I say that not a second of it was boring? Humor is cathartic, and A Great Hunger succeeds in capturing the laughter that comes when everything else is futile.