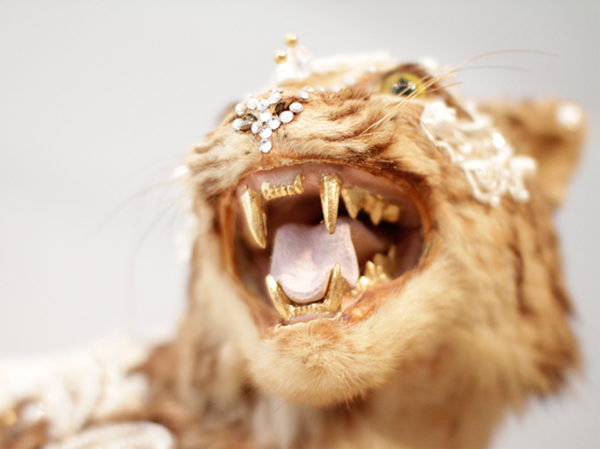 This month SOIL Gallery has about it the whiff of a naturalist’s curiosity cabinet. Of course, always lurking beneath that fresh-faced, well-mannered Victoriana is Dickensian brutality and repressed sexuality ready to burst the seams.

The subverted naturalist’s aesthetic is scattered through the gallery: Emily Nachison’s oversize enamel mushroom shapes sprout alien-like from the floor. Anthony Sonnenberg’s taxidermied bobcat with a gold leaf grill crouches on a bed of lace, glass baubles and freshwater pearls. One of Carolyn Hopkins’ sculptures, a disemboweled fowl spraying red fabric from a splayed chest cavity, hangs in the front window.

The show is titled Sticks and Stones and doesn’t try to explain itself other than as a “collaborative installation.” These artists are at least superficially related: elaborate overworking of materials is one thing in common, along with an interest in ornamentation and taxidermy. Both Hopkins and Nachinson recently received degrees from Cranbrook Academy. Sonnenberg just got his from University of Washington. 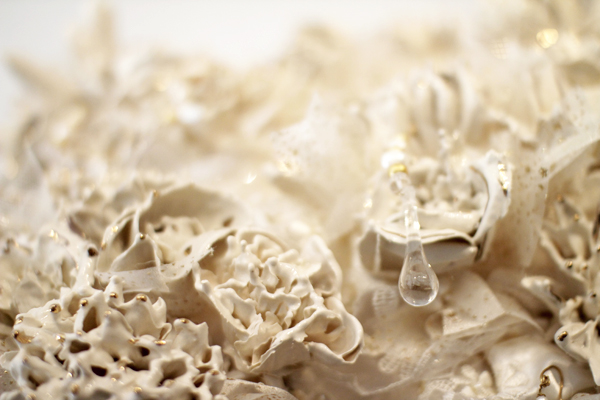 On its own, taxidermy is already kitschy and morbid. It can be used effectively in art or…not. Sonnenberg’s use of it smacks of humor and self-deprecation, which serves him well. He caricatures the machismo of preserving animal trophies in his Captain Dirty Bear performances (seen last year at both Seattle Art Museum and NEPO 5K, where he stripped mostly-naked, skin dusted with gold glitter, and donned an entire skinned bear as an outfit) or in sculptures like the one at SOIL, which is bedazzled to excess. Sonnenberg’s The Apotheosis is, true to its name, a baroque-to-the-max altarpiece. The cat is installed amongst gold-tipped porcelain carnations, glass droplets and lace and is mounted to the wall like a shipwrecked chandelier. Other pieces peppering the gallery-cum-wunderkammer include Sonnenberg’s Still Life Studies hand-built from porcelain. They’re lacy, amorphous sculptures blossoming with roses and bears, glazed in silver nitrate or melted brass.

Sonnenberg excels with materials like this and is keeping good company, aesthetically, with Seattle artists like Alwyn O’Brien and Jeffry Mitchell. Similar to Mitchell, the conceptual aspect of his work — his interlacing narratives of sexuality and the physical grotesque — is icing (er, gold leaf and luster) on the cake. For his MFA thesis show Sonnenberg rigged two vibrators to the base of a giant bouquet made of hammered-metal roses. The thing jittered nervously and filled the gallery with a muted, erotic buzz. Much of Sonnenberg’s sculptural work is like that: pornographic and grandmotherly at the same time, making it accessible and delightful as apple pie. 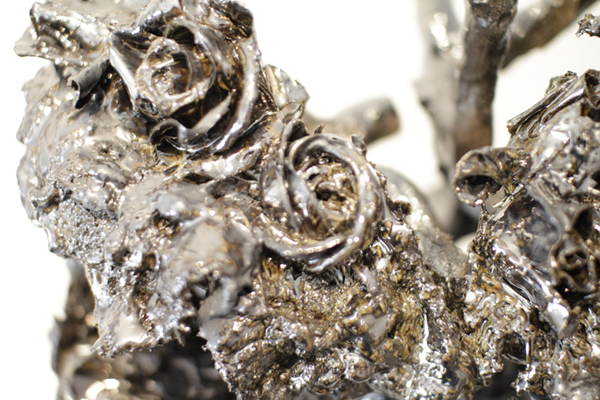 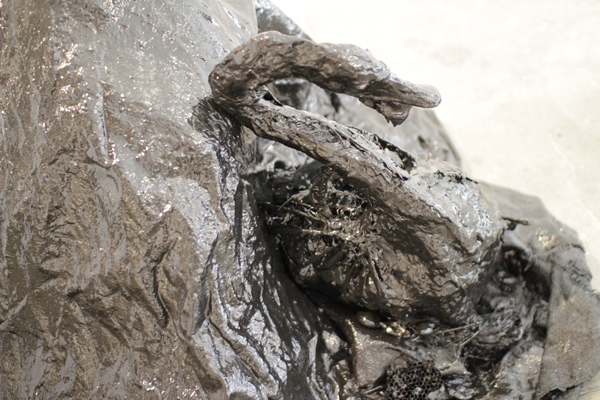 Nachison’s work is the most feral of the Sticks and Stones crew. She’s also used taxidermy forms in the past, but for this show has left the forms behind, instead using foam, fabric, resin and enamel to build up gunky, organic sculptures drizzled in black metallic sheen. Black Swan Vignette rises from the concrete floor like an island of congealed enamel. The swan looks literally tarred and feathered. Is Vignette erotic? An environmental disaster? A lustrous sculpture? Nachison’s aesthetic — coyly mysterious yet kind of gross — is just the thing to elicit attraction-repulsion. All these primitive forms, ranging from lumpy, cast-glass mushrooms to resinous cairns, trigger a primal nerve. 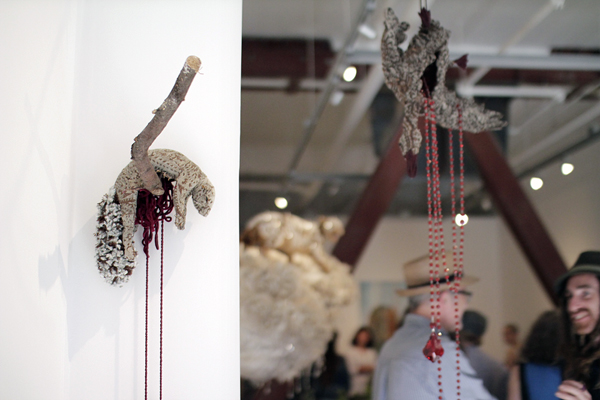 Ironically, Hopkins, who curated Sticks and Stones, is the artist whose work sticks out in the show, not in the best way. Where Sonnenberg’s prettiness zigs into self-indulgent, self-referential camp, Hopkins’ morbid prettiness zags into boudoir preciousness. Her plush animals and taxidermy forms of small wild animals, gutted and stuffed with lengths of crimson lace, doilies and strings of beads, fall flat and twee. It might simply be because local artists like Mandy Greer, Sherry Markovitz and Paul D. McKee have also worked this aesthetic extensively and have, frankly, set the bar high.

In the past Hopkins has strapped quilted log cabins to a taxidermied horse or constructed life-size dioramas of upholstered taxidermy forms breaking out — literally up and out of — household furnishings, couches, wood paneling. She’s constructed surreal scenes (ranging in scale from installation to collage) of hunting paraphernalia imposed on domestic spaces. These pack more punch than the stuff at SOIL, making cracks at (or in) clichés about gender and ornamentation. 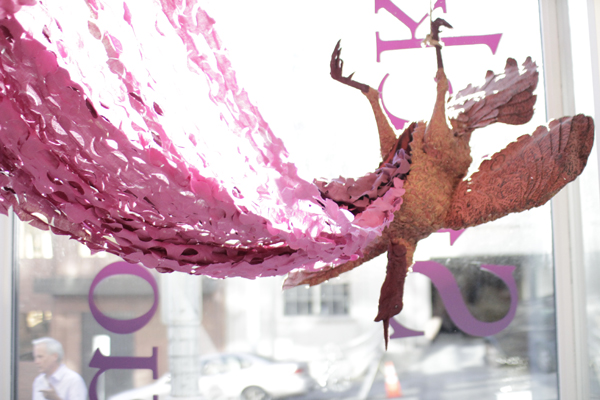 Sticks and Stones is on view at SOIL Gallery through July 28, 2012.