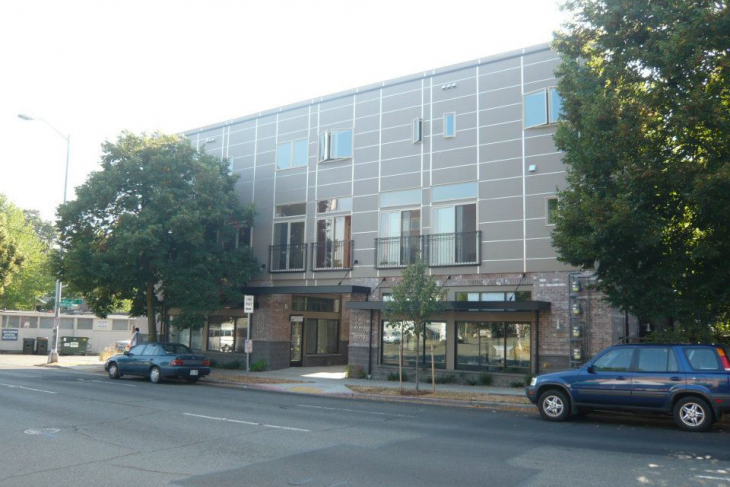 Every time Stan Mastalerz opens the door to his townhouse, he thanks his lucky stars. How many people enter their home through a 400-square-foot gallery, complete with sculptures and professional lighting? “This is what I come home to,” he says, turning toward the space with a face that suggests this feeling of gratitude has not yet worn off.

Mastalerz, a painter and sculptor himself, officially opened his new space, Stanline Gallery, early last month with a collection of paintings, sculptures, drawings and photos by local artists Dan Ayala and Mary Gross. On a Saturday afternoon, friends and passersby found the gallery tucked away in a courtyard off Roosevelt Way. “Some people came at night,” Mastalerz says with a grin. “They thought it was an evening celebration. Can’t do that here, with the neighbors.”

The clean-tiled courtyard, with its pristinely coiffed greenery giving way to a hair salon and an optometrist’s office, is a far cry from the smoke- and beer-filled alleyway of Secluded Alley Works, a collaborative art space at 12th Avenue and Yesler where Mastalerz had a studio during the early 2000s. Back then, he was part of a vibrant DIY community that gathered in the alley dividing the eponymous complex—one building that housed a gallery and performance venue, and a second with art studios—until it closed in 2004.

As a member of the “revolving cast of artists and musicians” of SAW, Mastalerz curated and helped organize art shows. “I enjoyed working with artists, organizing shows, events where people can talk about art. That’s what I want to do again.”

He’d tried it some years ago in the hallway of his townhouse, showing art of other artists during “openings” in his home studio. It never really took off. “The timing is right now,” he says. “The Roosevelt neighborhood has changed. Café Racer [the bar/café/venue on Roosevelt Way] just reopened. More people live here. There’s more foot traffic. In three years, when the light rail extension is here, that’ll even get better.”

The jigsaw pieces also fell into place on a practical level. “I’m not working as much and can devote more time to the gallery,” he says. “I’m in a better position to do it.” Financially, too: Because Mastalerz owns the space, he doesn’t have to worry about rent guzzling up his budget which enables him to devote the gallery to emerging and established artists who don’t get many chances to show elsewhere.

“[Stanline Gallery] is a space that can function without a lot of demand,” says Mary Gross, who knows Mastalerz and Ayala from their time at SAW. “It can be a place for gatherings, installations, talks—a nimble venue, a place to convene as an art community.”

Gross’ work, a haunting black-and-white multimedia series of crashed cars in semi-finished Pacific Northwest sceneries, is on view alongside Ayala’s colorful, neomodernist paintings at the gallery through mid-July. Probably—Mastalerz hasn’t arranged for all the details yet. There isn’t really a plan. “Just my love of art,” he says.

For now, a few shows are booked for fall 2018 and a show of former SAW artists is penciled in for early 2019. Perhaps, Mastalerz admits, he’s a little nostalgic for the SAW days. He’s not the only one, judging from a recent Facebook post by Diana Adams of the Capitol Hill bar/gallery Vermillion. In it, she expressed how meeting the group of SAW-related artists inspired her to open her own art space and many subsequent comments on the post reminisced about SAW and other collective spaces and the people who created them.

When I bring this up with Mastalerz, he smiles. “Diana has been an inspiration for me. How she’s crafted a space for artists. I want to do the same. And if I don’t make any money, that’s fine. Perhaps the fact that I opened this space will inspire someone, too.”