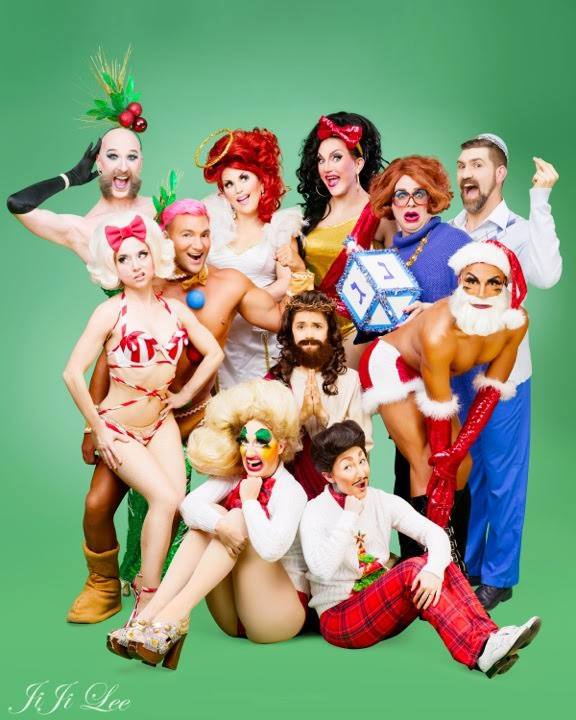 The cast of 'Homo for the Holidays,' photo by JiJi Lee Photography.

Tuesday, Dec. 15
Ever since Barjot owner Wylie Bush announced the end of dinner service at his charming neighborhood cafe a couple months ago, we’ve been waiting for new news, and now it’s here: Tuesday night, chef Nick Coffey is partnering with Standard Brewing’s Justin Gerardy to create a winter beer pop-up dinner. We loved Coffey’s rustic, adventurous dinner menu previously and we’re dedicated fans of Gerardy’s brews, including his fresh-hopped beers and one-of-a-kind Bee’s Wine. Word is Coffey is cooking with some of the ingredients Gerardy used to make the beer he’s serving. In short, we’re pumped. –Jonathan Zwickel
Barjot

Wednesday, Dec. 16 – Sunday, Dec. 20
Homo for the Holidays is the seasonal offering from DeLouRue Presents (Kitten LaRue, Lou Henry Hoover and Ben DeLeCreme), and if you’re in the mood for some clever, campy dance/drag/comedy/burlesqure/boylesque for the holidays, this is the show for you. They’ve had prancing dancing reindeer, Christmas carols a la Lady Gaga, a stripping candy cane and gingerbread man, sad Jesus—let’s all find out what hilarious delights DeLouRue has brought us this year, shall we? Homo for the Holidays runs through Dec. 27. –Gemma Wilson
West Hall, Oddfellows Building

Thursday, Dec. 17
The Comedy Womb at the Rendezvous spawned a whole new generation of Seattle comics, many of them women and/or queer. It also introduced a new rubric: no misogyny, racism, homophobia, transphobia, body shaming or “punching down.” These rules succeeded in pissing off all the right people and changing some folks’ idea of an open mic from a “support group for sociopaths” to a genuine safe space for exploration and creativity. The Couth Buzzard Comedy Show, which performs every Thursday, is a Womb offshoot, and the same egalitarian, affirming spirit presides. –Brett Hamil
Couth Buzzard Books

Thursday, Dec. 17
In case the dizzying guitar arpeggios, hyper-caffeinated double-bass drums, and kerosene-gargling orc vocals didn’t give it away, Bellingham’s Black Breath is metal as fuck. Given how loud and fast they play, a neck brace is highly recommended, and earplugs are a must. –Tony Kay
Neumos

Friday, Dec. 18
With their boy/girl vocal dynamic and a songwriting-driven style that helped create the Americana movement, X became one of the few first-wave LA punk bands to break free of the genre’s loud-fast confines. They can still kick up some dust in an epic way live, too. Former Minutemen bassist Mike Watt opens with his latest project, The Secondmen. –Tony Kay
Showbox Market