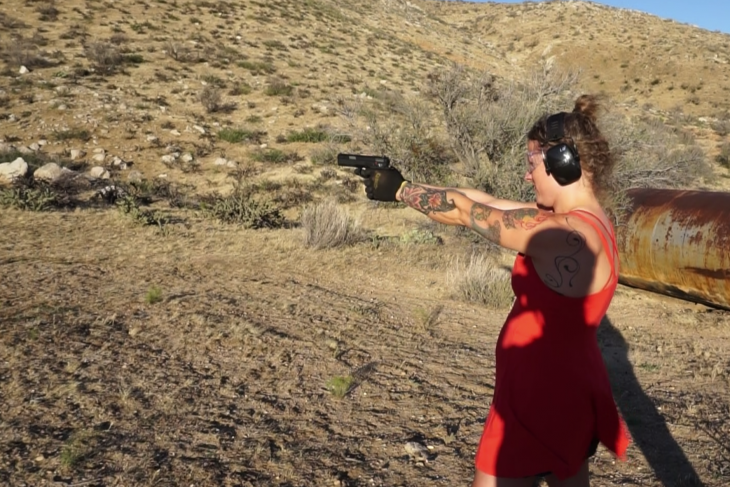 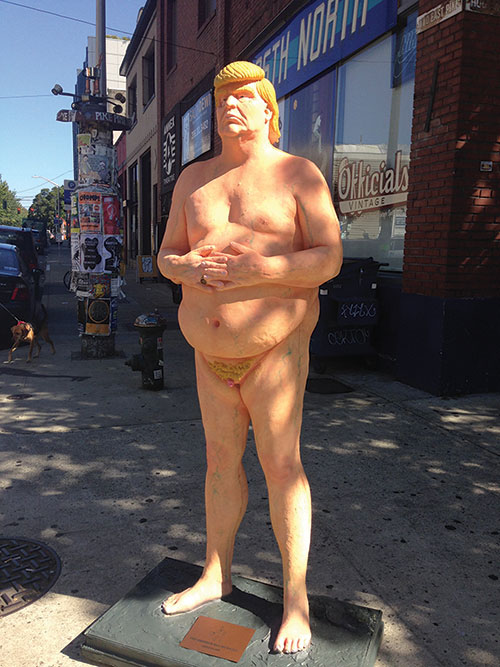 One sunny day in August, Donald Trump appeared in five cities across the U.S., including Seattle—a naked statue of Trump, that is. The statues, titled “The Emperor Has No Balls,” were installed at busy intersections in New York, LA, San Francisco, Cleveland and Seattle by street art collective Indecline.

A few months later—two weeks before the November elections, to be exact—British artist Alison Jackson staged a performance outside the Trump Tower in New York. She dressed up as the then-candidate and walked around the block flanked by young women in bikinis chanting “Respect us” while carrying signs reading “Miss Piggy” and “I am not a slut.” The message was crystal clear, but as tourists and media overran the posse, the performance became its own standalone statement on celebrity culture and social media (and, conveniently, a perfect advertisement for Jackson’s gallery exhibit opening that day).

As the election results rolled in two weeks later, the streets in Seattle were eerily empty. A marching band played to some people protesting on Capitol Hill, but otherwise the city felt silent. That night, Christine Babic and Ryan Mitchell burned a flag in front of the Space Needle. You can see its remains at Babic’s solo show, When She Dies, You Too Will Die, open now at CoCA in Pioneer Square.

“The burning itself was not necessarily art,” Babic says, “but more of a comment. Trump’s election was a reminder of how racist our country is and of our responsibility to speak up about injustice.” But Babic, who is of Alaskan Chugach Suqpiaq heritage, doesn’t see that much distinction from the era before Trump: “It’s always been hard for indigenous people.”

“Yes, these are contentious times, but look at American history,” says artist DK Pan. “There’s been many horrors on this land. It’s helpful to take a broader perspective. Not to say that art and bold actions are not helpful. I believe art has the capacity to contribute to and instigate mass change. But, for a lot of people, and specifically people of color, the political is personal. It’s about survival.”

Pan reverses the late-’60 slogan “the personal is political,” which was heavily touted while the anti-war movement soared, when the art world and political activism first intersected in earnest. From that time to the present, artists from across the U.S. used flyers, posters and public actions to raise awareness about issues of sexuality and race, AIDS, the environment, feminism and gentrification. By 1999, police were cracking down on masses of WTO street protesters in Seattle. One reactionary development was the formation of the Seattle-based Infernal Noise Brigade. The radical art-activist group and marching band, of which DK Pan was a member, toured around the world. Could an artful collective like that exist in today’s Seattle?

“It’s interesting to see what would be the next iteration of a marching band today,” he says. “But at the same time we don’t need to linger in the past—meaning tactics and strategies for resistance must evolve.”

To understand today’s intersection of art and protest, we need to go back to 2011 and the Occupy Wall Street protests. “Occupy Museums” resisted the “pyramid schemes of the temples of cultural elitism” and staged actions in the Guggenheim, projecting a bright “1%” on its curved, modernist walls. In his book Strike Art: Contemporary Art and the Post-Occupy Condition, Yates McKee argued that the Occupy movement ushered in a new era of “artistically oriented direct action.” McKee defined this newly opened space as artivism.

During the COP21, the United Nations Conference on Climate Change last December, Icelandic artist Olafur Eliasson installed 12 big, melting blocks of ice, arranged like a clock in a busy square in Paris. Artist Dread Scott staged a powerful performance “On the impossibility of freedom in a country founded on colonialism and genocide,” where he walked into the jet of a water hose and eventually surrendered to the ground. 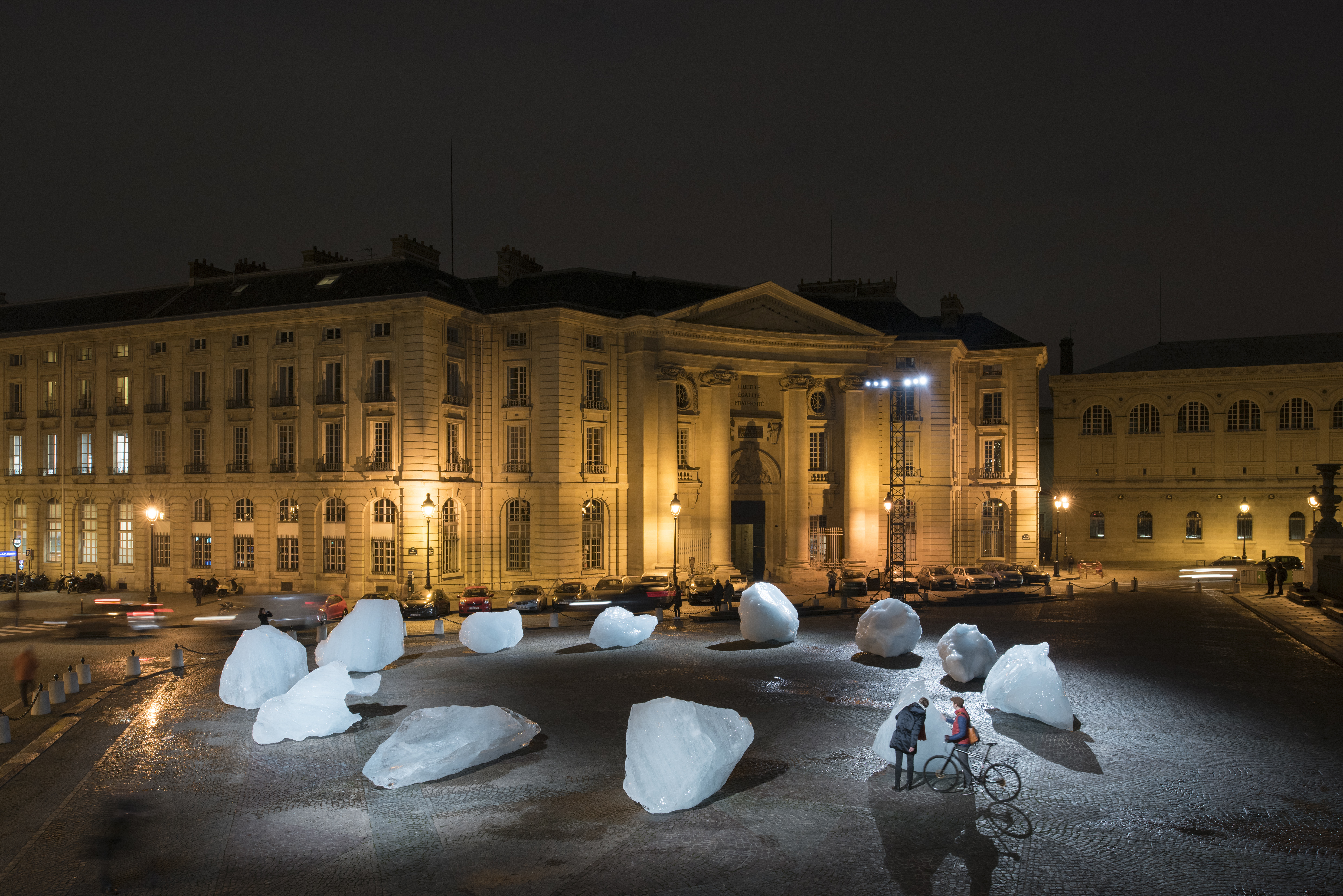 Bodies hit the ground in the Northwest as well. Protesters staged a die-in at Tacoma Art Museum to protest the disproportionate number of white artists represented in Art AIDS America. (The response was lead by Tacoma artist Christopher Jordan, who created a digital collage in black and white—highlighted by a bright, cut-up orange moon—called “Edges of a Silhouetted Earth.”)

micha cárdenas, a Seattle-based artist, theorist, activist and professor at the University of Washington Bothell, takes a more pragmatic approach. She directs the design-research lab Poetic Operations Collaborative (POC) at UW Bothell and has been working safety issues for trans women of color, among others. Together with Edxie Betts, Chris Head and Patrisse Cullors, co-founder of Black Lives Matter, she developed the project “Unstoppable,” creating bulletproof material out of cheap or found materials like kevlar and rubber and taking the art world’s objet trouvé (“found object”) to a political level. A video of the testing phase, involving firing guns from a distance, was shown last month in the Alice Gallery’s The Bubble: Safety by Ritual and Design. The gallery emphasized a sense of urgency by labeling the exhibit as an “emergency response exhibition.”

“I do feel like things are different after the elections, but it’s also similar,” cárdenas says. “It was and still is more and more unsafe for trans women of color. ‘Unstoppable’ feels more relevant now, but maybe for a broader range of people.” 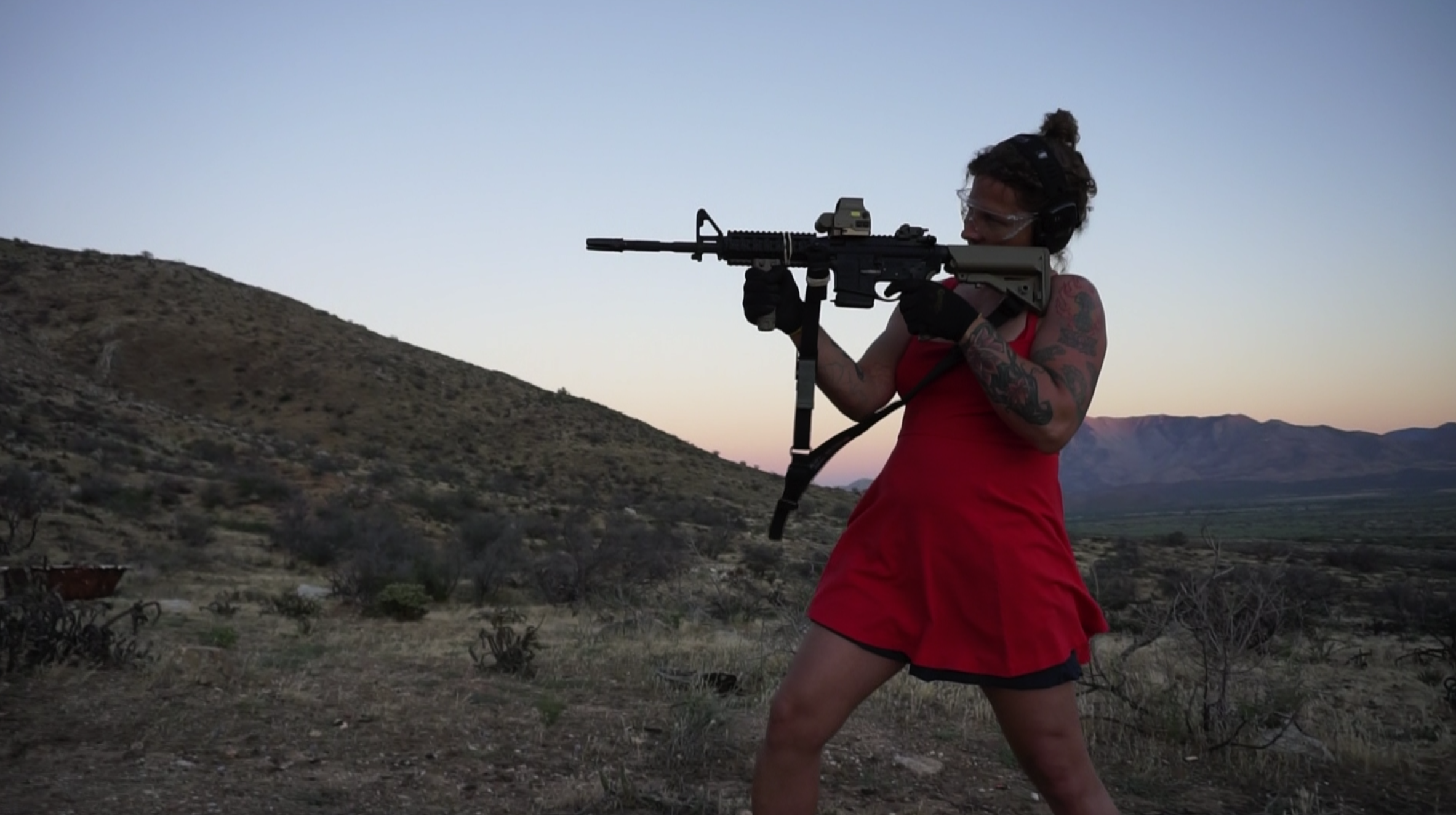 cárdenas has also been working on strength and self-defense classes for trans people and is looking into staging some of those classes as part of her project #stronger. “I try not to make a distinction between my activism and art,” she says. “I make activist art, and have been doing social justice work throughout my career and in my writing.” While cárdenas’ work is conceptual, her approach could not feel more real. Art is not enough to protect us. Her stance is an effective reminder that a painting will not stop bullets, will not keep us safe. Participating in #stronger will.

Social media has proven an effective tool for social movements like Indignados, Black Lives Matter, #ShoutYourAbortion and the Arab Spring. Now it is becoming a valuable mechanism for artivism, too. The website reparations.me, where people of color can ask white people for services and support, defies crumbling notions of what and how much is expected of the spectator. The social media project was founded by interdisciplinary and conceptual artist Natasha Marin, who is among a growing number of Seattle artists making online conceptual art that lingers between performance and project.

Some international artists recently used these techniques effectively, exploring Twitter, Instagram and Kickstarter as mediums. Cuban performance artist Tania Bruguera often asks users to contribute, transforming them into collaborators. Chinese dissident and artist Ai Weiwei (who famously said “Any artist who is not an activist is a dead artist”) used Twitter to publish names of children who died in the 2008 Sichuan earthquake. Recently, he turned to Instagram to post about traveling to refugee camps in Turkey and Greece.

This wasn’t necessarily part of his art practice. Weiwei just felt the urge to share—much like Mitchell and Babic, who went to Standing Rock in September and chronicled their travels on social media. 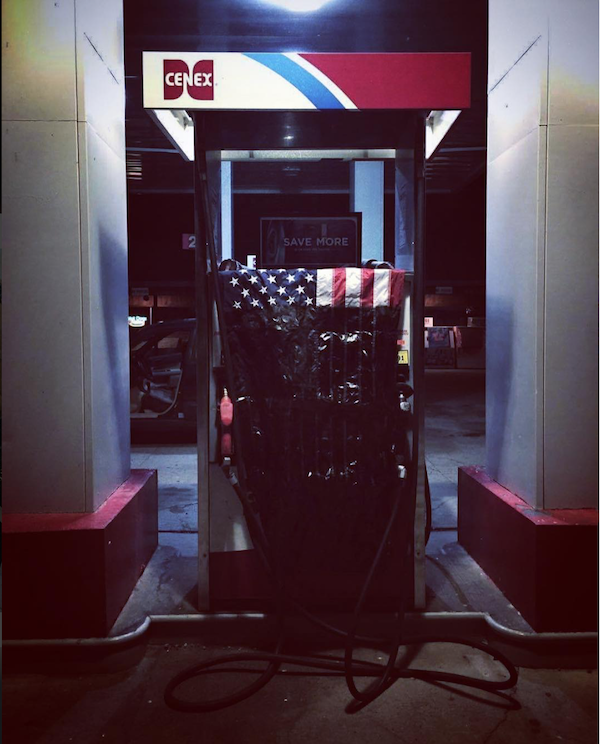 “For me, as a native person who has personally lived through the damaging effects of the oil industry—the Exxon Valdez oil disaster affected and still affects my family and land—I felt an inherent responsibility to go,” Babic says. On the way there, she hung an American flag, taped black to look like it was dripping in oil, on a gas pump. (The flag is also on display at CoCA.)

Mitchell, who was on the trip with her, also felt a responsibility to go, although for him, it didn’t directly relate to his art practice. “Going to Standing Rock was solidarity,” he says. “Listening, not talking. It’s different for Christine, who faces a different set of laws than I do as a white man. I wasn’t there as an artist. I was there as a white man in solidarity. You’re not necessarily helping by making art, you’re helping by being there. Also, I’m not trying to appropriate anything, and the Sioux Tribe have stated too that they don’t want to be the backdrop of anyone’s art. But sharing experiences and news was important.”

Numerous artists and designers have directly raised funds for the protests at Standing Rock, like the one-night photography show by Chantal Anderson at Vignettes gallery. In Tacoma, the exhibition space for Protect the Sacred: Native artists for Standing Rock shows only work by indigenous artists and doubles as drop-off location for donations. All proceeds go to the protectors in Standing Rock.

Still, there must be more room for artivism in the city. Some artists believe there’s an urgency to do more; others see a lot of white, well-off citizens who have it too good. Mitchell cites Russian dissident-artists Pyotr Pavlensky, who famously nailed his scrotum to the Red Square, and Pussy Riot, who released the song “Straight Outta Vagina,” noting that “female sexuality is bigger than any populist megalomaniac.”

“Their specific conditions and contexts render what they do dangerous,” Mitchell says. “It’s close, and therefore more real. Here in Seattle we have been privileged to not have the mass suffering in our city as seen in other areas like Cleveland, Detroit or St. Louis. We’ve been able to mask or hide our suffering populations when it’s convenient politically or artistically. We yell and scream for a day or two, and then the noise goes away without any meaningful change.” 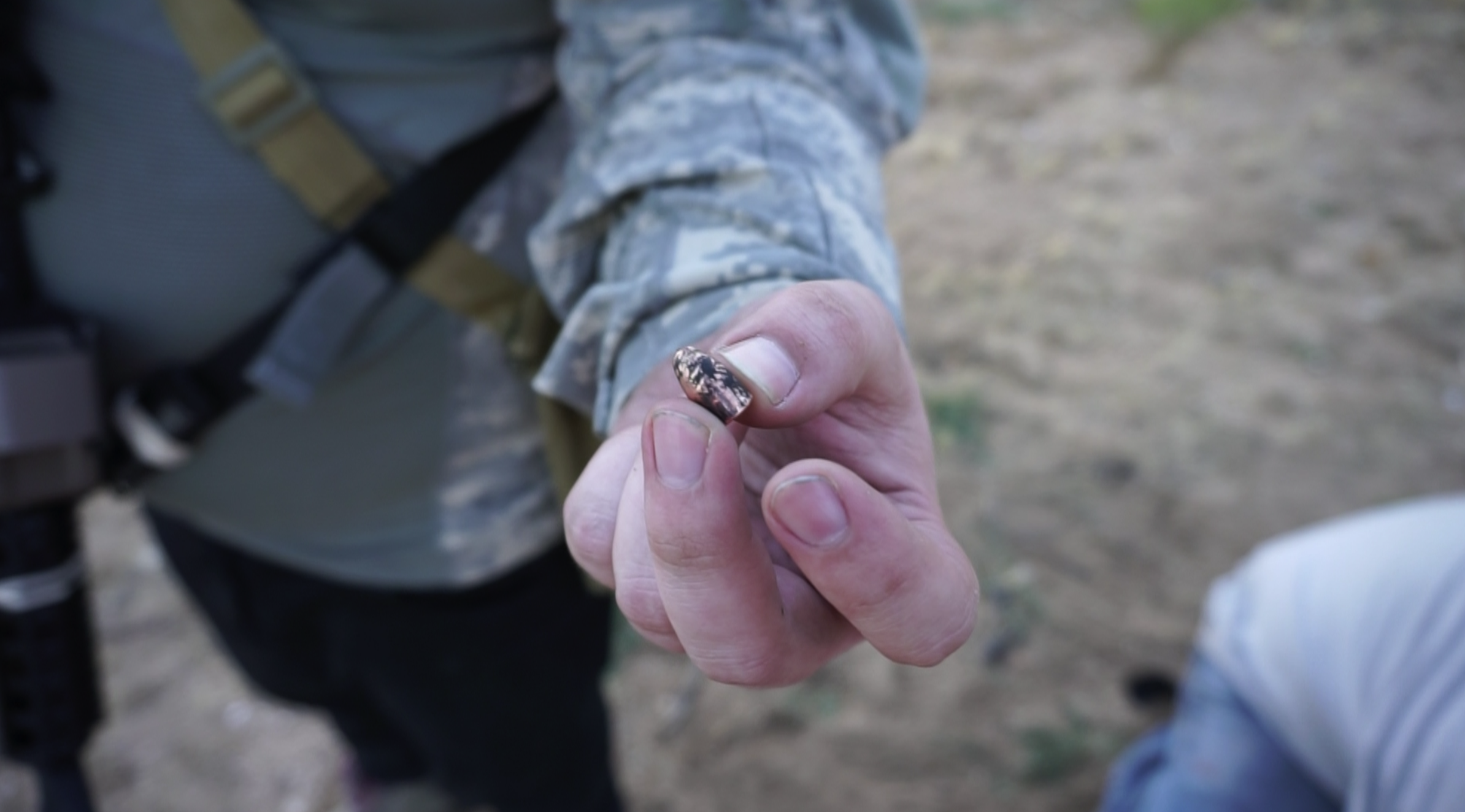 The Trump statues were not artivism. In fact, most evidence suggests they were a commercial ploy. Certainly they were unchallenging, body-shaming art, as blatantly egocentric as the man they criticized. More than anything, they laid bare how easily we are distracted by spectacle.

But pageantry is not sufficient. Neither are retweets and cut-and-paste Facebook posts. Post-WTO and even post-Occupy, we live in a different world: a post-Brexit, post-election world filled with fake news, social media rants, xenophobic discourse and a hardening political climate in the U.S. and Europe. We hear the slogan “desperate times call for desperate measures” from governments in Europe in defense of austerity measures and immigration prohibition. It also applies to the art world today.

Protest art will have to adapt and demonstrate that it has not been dumbed down. A Banksy mural or exhibition with “protest art” on the walls of a blue-chip gallery might be interesting, but such gestures do not reach beyond the classist art-world stratosphere, which sees its audience as spectators or buyers.

As Pan pointed out, mechanisms of resistance must evolve. In Seattle, protest art and artivism reaches beyond existing structures and lives up to the etymology of “activism,” which is to activate. Creating low-cost clothing to keep people safe and sharing information online (cárdenas) or catalyzing people to act on white privilege (Marin) convert the spectator into participant and create meaningful exchange. This is the kind of art that can help put Seattle on the art-world map.

But capitalism doesn’t reward this kind of art. It is not easily transferrable to the museum or gallery space, which in turn leaves artists under-compensated for their efforts. Rather than stripping or ignoring art of a subversive political bent, Seattle should reward it. Museums and institutions don’t have to spend their money on DJs and champagne in hope of activating visitors. Instead, they should fund the projects and artists that reach into the realm of the real.