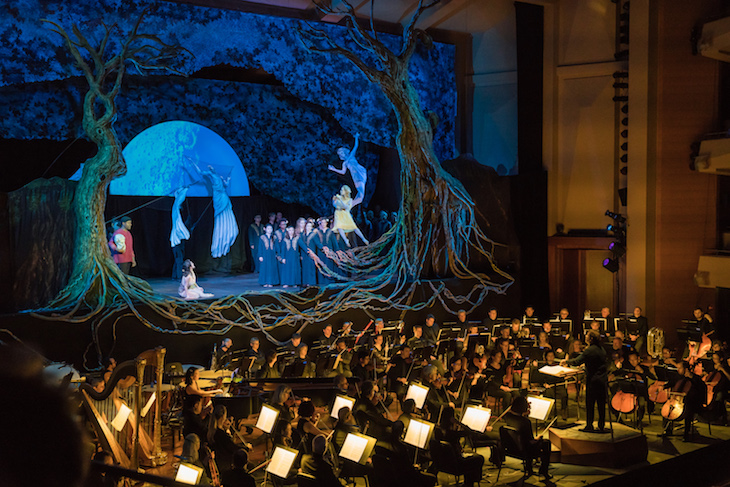 It was a capacity crowd for the Seattle Symphony performance at Benaroya Hall Thursday night and the audience got what it came for: an adventurous program of music we rarely hear live, with spectacular and unusual visuals, along with puppets, dancing and Russian folk singers.

The music was all Stravinsky, from his intentionally rough, three-minute arrangement for winds and percussion of a familiar melody, the “Song of the Volga Boatmen,” followed by his Concerto for piano and wind instruments, plus double basses, in which pianist Marc-Andre Hamelin was the soloist. It’s a very busy role: The piano hardly stops throughout the work, and Hamelin played from the score, necessitating a very active page turner. At the slow introduction, the large complement of winds sounded a tad uncertain, not usual for them, but they tightened up as soon as the piano joined at the start of the faster section.

This sounded like typical Stravinsky in his classical mode, full of vitality and jazzy, lively cacophony. The slow movement’s steady, ongoing chords and light winds punctuated the contemplative piano role, more tuneful, almost romantic, while the last movement sounded at times angular, dissonant and syncopated and at others reminiscent of Bach in its orderliness. Hamelin was a partner to the orchestra rather than way out front, working closely with music director Ludovic Morlot.

The unusual parts of the long program began with “Les Noces,” written as a ballet depicting a Russian peasant wedding. But with a prominent choral element and an accompaniment of percussion and four pianos, the piece is as much a cantata as anything else.

For this weekend’s performances, the SSO brought in from Russia the 14-member Dmitry Pokrovsky Ensemble, a group that has for years collected and documented songs, dances and vocal styles of Russian peasantry. It has also branched out to more contemporary works such as this one, to which their colorful style was eminently suited.

The singers told lively, joyful, sometimes ribald, sometimes raucous story of preparing first bride and then groom for the wedding and its aftermath. The sound, particularly of the women, was nasal, sometimes intentionally shrill, with glottal hiccups as ornamentation. Though not acted per se, and with individual roles not always delineated, it was performed with gestures to fit the words which were printed above in supertitles. Morlot and the musicians gave strong accompaniment to what was first and foremost a choral piece.

As if the first half of the concert had not already been a feast for the ears, the second half was devoted to Stravinsky’s indefinable work, his 51-minute “Persephone.” Part drama, part dance, part opera or oratorio, it’s performed here with flying life-size puppets, choruses, two dancers, solo tenor, narrator, scenery and full orchestra.

The story is the Greek myth of Persephone, the goddess abducted by Pluto, ruler of the underworld; Persephone returns from the underworld each spring to renew the earth and see her earthly spouse. The elaborate production is magnificent and absorbing. Picture the orchestra to the front of the stage. Behind and above them, two great tree trunks with extended roots enclose an elevated stage and a huge blue orb on the backdrop. The libretto is French, by Andre Gide, sung by tenor Kenneth Tarver, who appears with a large mask that he removes when singing.

Persephone comes in three versions: a narrator, spoken by Pauline Cheviller; a life-size puppet; and a dancer, Anna Marra, with the same features and dress as the puppet. The puppet, created by Michael Curry, who conceived of and directed this production, moves its arms, head and legs in amazingly lifelike fashion, and also soars overhead. Supertitles allow the audience to keep track of the action.

The cast includes Lauren McCrory as Persephone’s mother, Demeter, who wanders through the orchestra with a lantern, seeking her daughter; Pacific Northwest Ballet dancer Henry Cotton as Pluto (Pluto is also a big silver-faced puppet); and Mercury, appearing as a large and remarkable deer, part puppet, part human (Aaron Coffeen). And then there are two choruses, the Seattle Symphony Chorale and Northwest Boychoir, dressed in long robes with shoulder decoration, plus puppet ghosts swooping around in the Underworld. Tarver’s fine voice, Cheviller’s clear narration, the music, the orchestral sound and all the movement combine to give an enthralling experience from beginning to end.