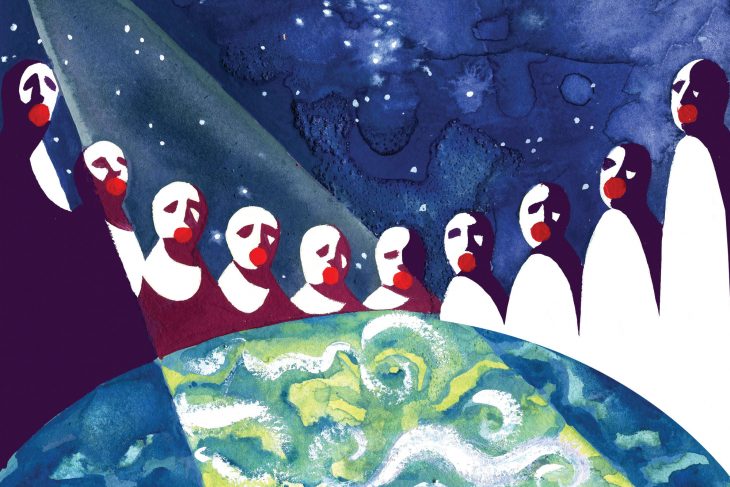 When Eddie DeHais first read Scotto Moore’s musical Silhouette, they were pissed. “I said, why didn’t you ask me to direct this! I hate you!” DeHais laughs, their faux-hostility long dissipated. DeHais and Moore are co-directing Moore’s brand-new a cappella musical, with a cast of 12, primarily womxn and non-binary people. It’s an epic on a cosmic scale, in which every body and every voice is part of the tapestry of the storytelling.

“I rarely see shows that deal with such complex ambiguity, and as an artist that’s what I’m interested in,” DeHais says. “What is right or wrong? How do you make those decisions? How do you fight fascism without falling into those same tactics?”

Silhouette, Moore explains, is a town on a faraway planet, and home to a group of women who long ago mutinied from an imperialist fleet ravaging the galaxy. When a scout ship from the fleet crashes there hundreds of years later, the residents rescue the pilot, then realize that a scout could mean the fleet is nearby—how far will they go to protect their refuge?

Moore and DeHais first met when DeHais was auditioning for Moore’s play Balconies. “There was one character I was struggling with, and I said, I bet if I cast this intelligent talent in this role we’ll figure something out,” Moore says. “It was a gamble, but after the first read-through I got so much feedback [from DeHais] about how I had completely missed the boat with this character, and from that point on we knew we had a real connection.”

They refined their shared, sci-fi-steeped aesthetic—and their ability to butt heads in a constructive way—working on Storm and Desire, a webcomic they created together for more than two years. “For some people science fiction is about spaceships, technology and the future,” DeHais says. “For me, science fiction is about the mindscape, the social ramifications of a society that goes to extremes.”

Moore, who is writing the book, music and lyrics, is also helping arrange the music for a cappella voices. “Part of the vision is we’re moving actors between the background and the foreground, but nobody ever really leaves the stage,” he says. “That’s indicative to me of the coherence of these characters—the bubble they’ve crafted for themselves is reflected in the way they generate music.”

Moore initially approached DeHais about choreographing movement for the show. DeHais proposed that they also handle scenic design, as the movement and sets will be so intertwined. Moore tends toward grand narrative work; DeHais ambitious, interdisciplinary abstraction. As codirectors, their Venn Diagram overlaps on story and acting. “We’re constantly challenging each other’s expectations,” DeHais says. “The work is always going to be better because we bring such different things.”