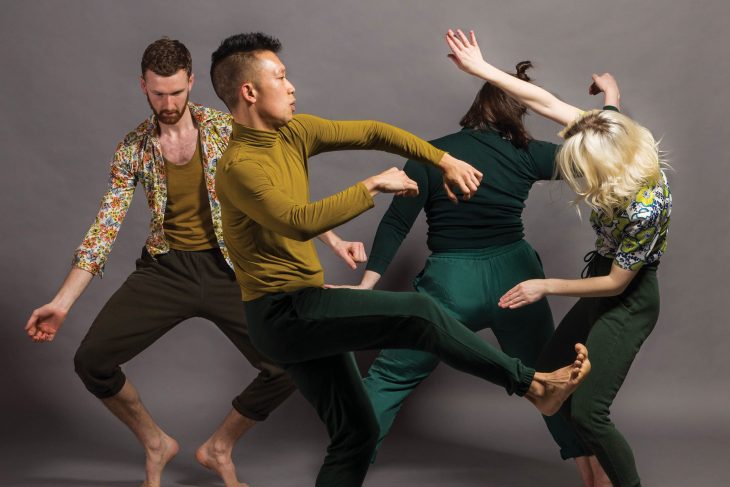 “It’s like you’re holding a small, soft kitten,” choreographer Kim Lusk explains as she demonstrates to five dancers exactly how she wants their hands. Behind her, the dancers mimic the position precisely. “Then, this is the most perfect, beautiful, Swan Lake arabesque you’ve ever done in your life!” Throwing their arms back, the dancers thrust their chests into the space. Lusk cues up the music, a swelling synth overlaid with a playful pop beat. “Swan-kitty cat-robot-syncopated-BINK!” she chants rhythmically as the dancers practice the movement phrase, dissolving into laughs as they reach a particularly frantic jumping-jack moment. Watching Lusk rehearse for her upcoming world premiere, A Dance for Dark Horses, demonstrates just how much detail goes into 30 seconds of her choreography.

“It’s been a long time in the making,” Lusk says of Dark Horses. Back in 2014, she wasn’t getting the dance gigs she wanted and wasn’t seeing the kind of dance that interested her most—dance that was as entertaining as it was conceptual. Out of these two impulses she created a solo, The Full Bounty. It combined high-impact ballet vocabulary, sober-faced dance-party moves and playful non sequiturs (memorably, someone walked across stage in a Spider-Man mask). Every piece she’s done since then has explored the same style and themes—a playful push at the bounds of technique set to ’90s-nostalgia beats—each iteration refining her aesthetic.

Lusk’s work is often laugh-out-loud funny, but her dancers aren’t hamming it up. The humor develops out of the particularity or incongruity of the movement, like a silly gesture done with complete seriousness and exactitude. Lusk also employs an emotional sleight of hand where the smallest action—one quick flick of the eyes or a momentary change in pace—reveals the inner frustrations of these characters. “I love things where you can really tell what people are feeling,” Lusk explains. Her first instinct is usually too slapstick, but then she tones it down. “The direction is really playing with how extreme the subtlety can be.”

This strategy works both for comedy and for more serious moments. In one heart-wrenching section from 2016’s Underdog Solos, regular collaborator Erin McCarthy performed a restrained, meticulous failure of the rigorous movement. “Erin is one of the best dancers we have in Seattle,” Lusk says. “She totally has all that technique and we have to then set up challenges that are so hard that she can’t do them. Or we choreograph it to be off-balance.”

Lusk grew up studying at Bainbridge Dance Center, and after getting her degree at Connecticut College, returned to Seattle when everyone she knew was going to New York. “It’s exciting to me to use dancers who all live here, costume designers who grew up here, my musician lives here, and keep cultivating this great dance community.” Two of her dancers, Jenna Eady and Lillian Orrey, also came up in the Bainbridge program. She met composer Ryan Hume in sixth-grade band class.

Sticking with Seattle may stem from Lusk’s attraction to the underdog narrative, a driving force in A Dance for Dark Horses. Revealing the dancers’ challenges makes them relatable and create community around rooting for the long shot. That empathetic link is just want Lusk is looking for. It’s part of walking the line between entertainment and art, creating something her dance professors can discuss and her ranching family from Idaho can enjoy. For Lusk it’s not a slight against entertaining or esoteric work, it’s about sharing a love for dance and finding common ground.