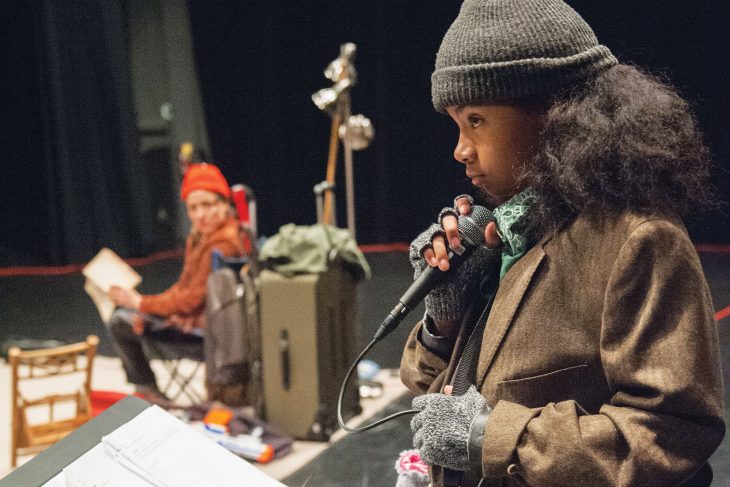 Libby King and Maya Flory-Barnes Salas on set at On the Boards. Photo by Bruce Clayton Tom.

Can we try…” director Jenny Koons pops up off the floor of On the Boards’ mainstage theatre where she’s observing actors Frank Boyd, Libby King and Maya Flory-Barnes Salas running bits of their brand-new, still very much in-progress theatre work Patti & the Kid. This rehearsal, one of the team’s first in months, is about revisiting and reinvestigating their material. Now Koons wants to pause their methodical madness, full of music, bubbles and Nerf guns, to riff with movement. Take five minutes, build three gestures. Let’s all just run around the space. “Can we try” is the guiding principle here.

Actually, madness is too strong a word for this process; there’s nothing madcap about this room. The energy is steady and sincere—art is joy, but art is work. There’s a lot of silence in this show. Oddness. Stillness.

“I don’t even know if we should call this a play,” says King, rubbing her hands over her face during a break. “Yeah, I don’t even know how we should talk about this thing yet,” Boyd agrees. Boyd and King started building Patti & the Kid, marketed as “a contemporary Western,” nearly two years ago, in the bleak fervor of the 2016 presidential campaign. They’re old friends and longtime members of adventurous New York ensemble theatre group The TEAM; both have impressive downtown theatre resumes. When King relocated to San Francisco from New York in 2016, she and Seattle-based Boyd knew they wanted to start creating something together.

There’s a reason boundary-pushing shows are hard to preview—they’re hard for writers to write about because they’re hard for artists to talk about. How do you describe something that you’re still figuring out? When you’re genuinely experimenting, testing, trying, adjusting, responding, feeling, scrapping, starting over—how do you explain that to someone on the outside? Start with what you do know.

“Waiting for Godot is a huge creative, spiritual inspiration for the show,” Boyd says. “The future of our country is an inspiration, how American ideas hold up in a dystopian future—the rugged individual, self-reliance—and creating a show where we can talk about these ideas without having a lot of written dialogue is something we know we’re trying to do.”

“We talked about this feeling of being left behind by technology, and the bombardment of content,” King says. “I don’t know why, but early on we were looking at silent films, Buster Keaton…” she trails off. “For me,” Boyd picks up, “I knew there was no way I could articulate what’s going on in the country or what should be happening better than anyone else, by writing some topical play. I don’t know if anybody should do that at this point.”

Initial ideas blossomed during an early 2017 residency at BASE in Georgetown; later a workshop at Z Space in San Francisco. But Boyd and King always knew they needed to grow their team. Adding Flory-Barnes Salas’s character was a crucial part of the show development, but even more crucial was adding the actor to the creation process. Flory-Barnes Salas may be 10 years old, but since joining the cast last fall, she’s contributed to this piece with the confidence and empowerment of a full collaborator, which she is. New York-based Koons joined as director around the same time.

“Hiring an at-the-time nine-year-old young woman to embody this character, and then to ask her to create her own material, that’s not happening anywhere else,” Koons says. “Experimental theatre—sorry to use those words—usually has a really specific demographic: who makes it, who sees it, whose voices are on stage. Readjusting the hierarchy in the room, how we’re making this show, how you guys have been making it with Maya, that’s as much what the show is about as anything.”