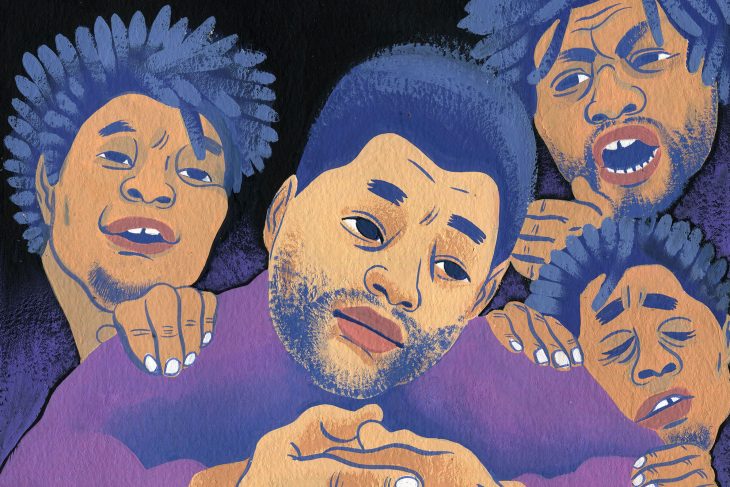 There are a lot of songs out there about love and heartbreak; Evan Flory-Barnes is more interested in the songs that exist between those two extremes. Songs about that one friend you’ve kissed on occasion. Songs about experiencing multiple great loves. Songs about socially imposed gender roles in relationships. Songs about friends and family and your own psycho-spiritual development.

The Seattle upright bassist and composer explores all this and more in his new show, On Loving the Muse and Family, which premieres at On the Boards this month. Inspired by the late-night variety shows of the ’50s and ’60s, Loving the Muse features Flory-Barnes singing and playing his own original music with an extended family of Seattle musicians, including the True Loves, the Seattle Girls Choir, friends from his bands Industrial Revelation and the Teaching, and a full chamber orchestra.

The first half of the show is more conceptual in scope, with Flory-Barnes portraying characters from his inner world: a higher self, a shadow, a child, an old man. In the second half Flory-Barnes plays himself, performing music inspired by his life experiences. In true variety-show fashion, the music ranges from 1950s rock ’n’ roll and swinging soulful numbers to modern-day jazz, funk, punk, classical and even country-western.

“One thing I love about the era of the old variety shows is there’s a good mix of experimentation—and at the same time also leaving room for humor and lightheartedness,” Flory-Barnes says, also noting the show’s high-caliber songwriting and musical arrangements.

The variety show format also showcases his range as a performer. Flory-Barnes sings, acts, plays bass and explores the way that love, music and the muse all intertwine.