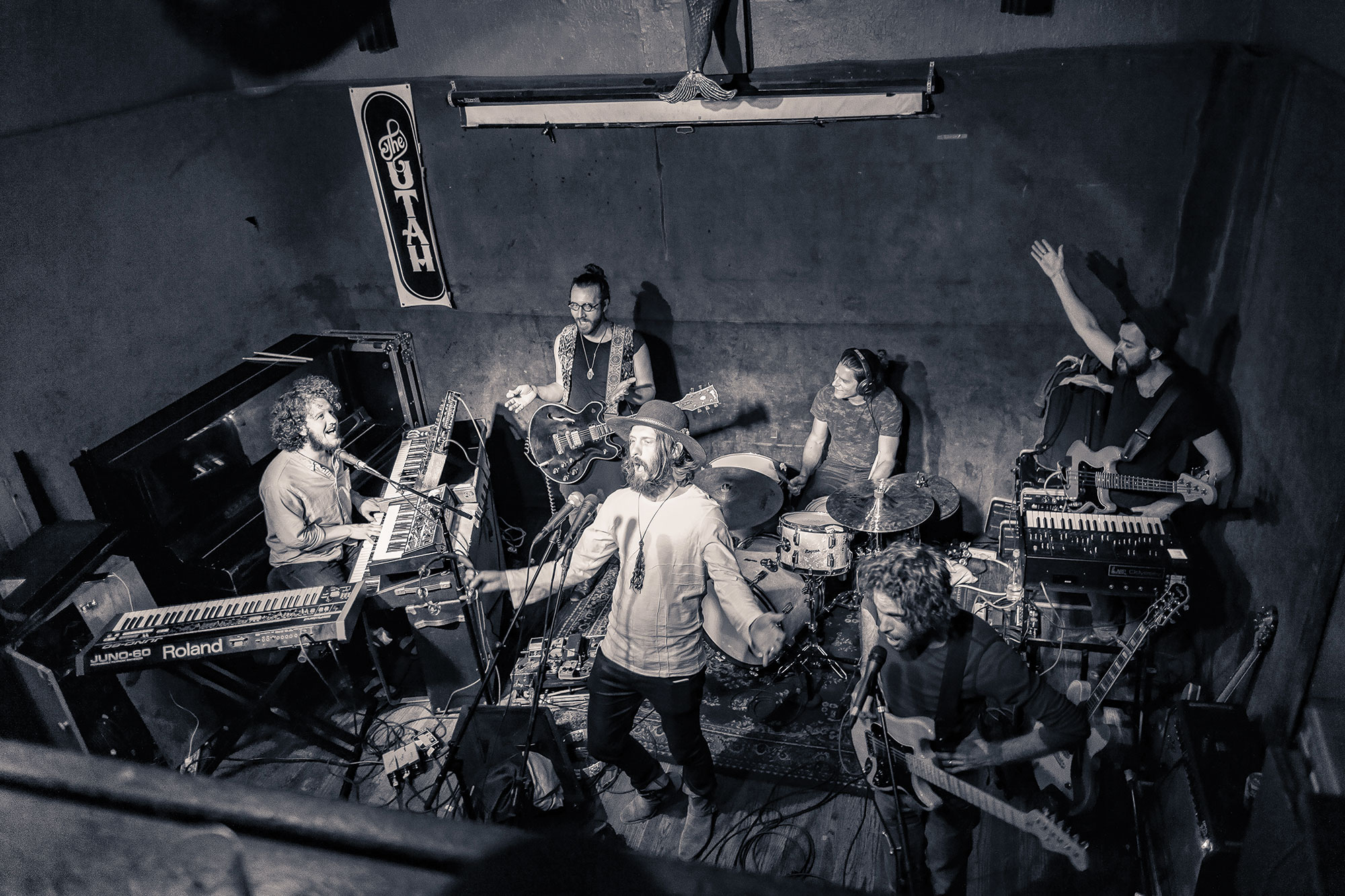 Turns out Motopony is a psychedelic  rock ’n’ roll band,” says Daniel Blue, as if discovering his band’s purpose right here, right now, in my living room on this sunny spring morning.

My stereo is still humming with the last notes of the last song on Motopony’s new album, Welcome You, which is indeed crammed start-to-finish with psychedelic rock ’n’ roll. The music is fantastic—smart and sexy and serious and fun, concise and poignant at some turns, expansive and muscular at others.

This is a band that has never known a single state of being. Since Blue first used the name Motopony in the mid-2000s, members have come and gone; instrumentation has changed dramatically more than once. The only constant is Daniel Blue, urban-shaman art-dork rock star, possessor of a lustrous voice and poetic mind, student of astrology and tarot and the Gospel of Kurt Cobain. Blue refuses stasis, electing instead to follow an artistic inclination with little regard for stylistic consistency, mastery of medium or, so far, commercial success.

Blue allows himself myriad contradictions—he’s a short-fused peacenik and a loner socialist. Hang around long enough and eventually you’ll hear him self-mythologize, for good reason: He’s relived his itinerant youth over and over in his head, shaping his artistic identity. Blue was born to a single mom in a trailer park outside LA, homeschooled by a born-again stepdad in Colorado, dropped into public high school in Tacoma. He graduated to a life of skateboarding, art and fashion, no college necessary. He spent his 20s in a communal warehouse/party space in downtown Tacoma with a skate ramp that launched directly onto 11th Street, past art galleries, coffee shops and bars owned by his extended crew. Now 35 years old, when he’s not traveling he splits his time between a studio apartment on Capitol Hill and the upstairs warehouse of a kitchen supply store in Sodo, the front third of which he’s turned into a funky, sprawling practice space and sanctuary.

Something’s always changing in Motopony because something’s always changing in Daniel Blue. Magnetic as he is, aglow with manic charisma, great hair and an electric guitar, Blue is also dangerously fragile. He needs your attention and he’s willing to share a piece of his soul to get it. On stage, he asserts his vulnerability, naive and preening, night after night. By day he lives as a Bohemian or bum or prince. He’s never had a job, though he’ll tell you he works his ass off for his music. Getting married on New Year’s Eve 2013 was the most permanent thing he’s ever done.

Whatever’s happening with Daniel Blue at this moment is pushing Motopony to rare heights. He’s surrounded himself with the right people, finding that friction is more interesting than polish. A shooting star or a new planet or some totally unprecedented celestial event—whatever it is, however long it lasts, Motopony is a raging spectacle leaving a trail of beautiful songs and unforgettable performances in its wake.

Ninety-nine percent of bands in the world will exhaust their careers without creating a song as special as “Get Down (Come Up).”

Motopony released this gem last September as the lead single off the Idle Beauty EP, their first project with New York-based indie label EOne Music. In its electro-pop sheen, it sounds similar to songs on Motopony’s eponymous album, which was made primarily via email collaboration between Blue in Tacoma and a wunderkind producer in Seattle named Buddy Ross. A full band recorded “Get Down (Come Up),” studio guys executing compositional ambition beyond anything Blue had previously attempted. And its meaning is immense, layers and layers expressed in colloquial language, metaphor interchanging with literalism. Blue practically raps his verses:

Will you walk with me, will you take some time?
Can we talk about love, can we talk about dying?
Will you listen if I choose to speak below where the network says it’s OK to go?
Get down!
Come up!

The song flows in dance-friendly, radio-ready midtempo for the first half before lingering in a diffuse, dub-style break midway. Tension builds over the next 60 seconds, Blue teasing out the lyric until the whole thing explodes in a heart-swelling climax of the “Bohemian Rhapsody”/”Fool in the Rain” variety: But once you been down you can’t forget to come back up again, baby come up!

The fervor sung into that line! The guts to deploy a tiny, triumphant guitar solo in the aftermath! The sky-grabbing, life-affirming ecstasy! Feel low, feel high but goddammit feel something because feeling is how you know you’re alive.

“Get Down (Come Up)” was the first indication that Motopony’s retooled engine is running at full speed. The second was its B-Side, “She Is Spirit.” Blue says the words to the song came to him during a drunken walk home from Sun Liquor on Capitol Hill:

If you ever sober up
You’ll see the city is a desert
And the only source of water
Is the love you find at home.

The song is one long incantation, ethereal and somber. Blue repeats several lines throughout: “be together,” “forgive your father,” “tell your secrets,” “help the weakest.” He believes the “She” in the title is his mother, who suffered from mental illness and died from cancer when Blue was 22. He sings with solemn sincerity, his voice sensuous and clear. When Marco Collins, Rock and Roll Hall of Fame radio DJ, recently played “She Is Spirit” on KEXP, he said it makes him weep every time he hears it.

Both songs are fearless, inventive pieces of music. Blue had written them years before—often playing “She Is Spirit” live with an acoustic guitar—but until the EP, had yet to record either. For far too long he couldn’t get the band right. The sound was in his head but hadn’t made it onto an album.

Where Idle Beauty was recorded over the course of years with three different iterations of Motopony, Welcome You, which came out in June, was recorded in a few weeks last summer with a band gathered at Bear Creek Studio in Woodinville. It features Motopony’s current lineup, with Blue, lead guitarist Nate Daley, long-timers Forrest Mauvais on drums and Mike Notter on rhythm guitar and new guys Terry Matson on bass and Andrew Butler on keys. It’s a fascinating band dynamic: Mauvais and Butler are 22 and 23, respectively; the rest of the dudes in their mid- to late-30s. Different stages in life, different intentions, catalyzing in the music.

Appropriately, Welcome You opens with the title track—electronic bombast that distills to Blue’s gentle salutation over acoustic guitar. Track 3, “Changing,” is the band’s fist-pumping mission statement: “Don’t hold back ’cause baby, this is life,” Blue sings before soaring on the singalong chorus. “Gypsy Woman,” a seven-minute voyage into lysergically-enhanced blues-rock, joins the romantic classic-rock tradition of gypsy-woman songs (hello Jimi Hendrix, Bob Dylan, Van Morrison, the Grateful Dead, Santana, Fleetwood Mac…). Each one of these is a would-be hit. In a world where Imagine Dragons, Alt-J, fun. and MGMT are festival-headlining, blockbuster rock bands, Motopony deserves more ears.

The album’s most intriguing song is “1971,” a sauntering, strings-burnished ballad reminiscent of Pink Floyd’s “Us and Them.” It’s the only song on the album written by Daley. As Motopony’s guitar wizard, Daley drops eloquent riffs and creative leads atop Notter’s steady rhythm guitar. As lead singer and songwriter in a pair of Tacoma-based bands, Daley is also a bandleader, accustomed to calling shots. He’s known Blue for a long time but joined the band only last year, recruited to fill Motopony’s latest lead-guitar vacancy.

Notter is Blue’s longtime confederate and disciple, “the Samwise to Daniel’s Frodo,” as Daley puts it. He’s been in the band almost since the beginning. Daley is more a foil, the Keith to Blue’s Mick.

There’s love between Daley and Blue—and there’s something less friendly. They’ve come to blows before, drunk after a gig in Houston, fired up from weeks on the road. Daley says they were just having fun but Blue got mean and almost killed him. They’re both strong personalities, eccentric dressers and phenomenal musicians. They both own Billy Jack-style Western hats and sometimes both wear them on stage. And they’re still working out the push-pull of their relationship—which is good news for anyone watching a Motopony show.

Packing up a van and driving 14 hours to deliver live music to a roomful of fans is a wonderful anachronism. The summer tour is a rite of passage in America, as confined by cliché as it is open to limitless possibility. In mid-June, Motopony blazed down the West Coast in a maroon 15-seat Chevy with double-decker beds custom-built into the back. I joined Blue, Notter and Butler leaving from Seattle on a Friday, stopping in Tacoma to grab Daley and in Sacramento to pick up Mauvais. We stayed at his parents’ house that night. The band’s first gig was the following night in San Francisco.

During the drive the band endured a series of hackneyed, on-the-road-again plot points…

…all of which they handled with humor and grace and professional resignation. And that was only the first day.

At noon on Saturday, the entire band came together for the first time in months for three hours of rehearsal at a studio in San Francisco’s Tenderloin (Matson, Motopony’s newest member, rendezvoused in the city after getting off tour as Hey Marseilles’ sound engineer). Later, after soundcheck at Hotel Utah, an intimate, hundred-year-old bar and concert venue in San Francisco’s SoMa neighborhood, I sat down with the band and turned on the tape recorder.

“Want me to leave so you guys can talk about me?” Blue asks.

Daley goes in right away. “We’re sort of like a band of storms coming together. And maybe we’re not the same type of storm but we’re definitely making some spiritual weather. It’s metaphysical.” He concedes that it’s Blue’s band, says he’s not sure how long his role in the whole thing will last.

“This band resonates with the way I see the world, largely due to what Daniel’s about,” Notter says. “Daniel is one of the most compassionate, genuinely caring people I’ve met, which is not usually the case with a frontman with a big ego and a huge voice.”

Matson says Motopony is the most spiritual band he’s been involved in. “The rest of my life is a shitshow,” he says. “I’m 37 years old, I’m month-to-month paying rent. I’ve been a freelance musician for five years. The only reason I do all that is to be able to be a part of things like this. I make sacrifices on a personal level.”

“There are no other options at this point,” Matson laughs.

In a few minutes, they’ll take the stage in front of a very crowded room. They’ll play most of Welcome You, plus “Get Down (Come Up)” and “She Is Spirit” and a handful of older songs. The crowd—well, the crowd goes nuts. They love it. They know the songs. The sound is full and heavy in the humid room. When he’s not singing in wild-eyed rapture, Blue dances a weird, elfin ballet on the tiny stage. He engages the crowd; the crowd engages back. The band nails every tempo shift, every crescendo, as a unit. They play past midnight, elevating this cramped club in a faraway city with near-religious fervor.

By the end of the 75-minute set, as the music is crashing around them, Blue and Daley end up in a tangled heap on the floor. It’s impossible to tell who tackled whom.