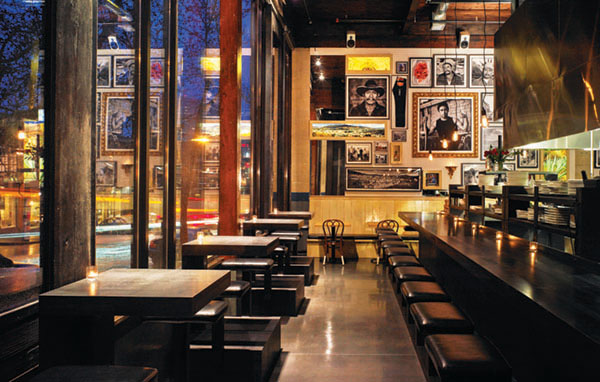 Obsessing over the mysteries of mezcal.

Mezcaleria Oaxaca is less a restaurant than a cathedral of mezcal, that mysterious spirit, salve and spark of Mexico. The former auto-body shop on Pine Street now opens loftily into an exposed kitchen and luminous bar. On the walls, an oversized patchwork of photos reaches the vaulted ceiling, some illuminated from behind, some framed in relief, each shot by Spike Mafford, a man who’s devoted much of his life to documenting Mexican culture. Rough-hewn, glass-doored light boxes display artifacts of contemporary Mexican life: Levi’s 501s, glass Coke bottles, a wooden club used to mash agave for mezcal.

The owners’ original spot in Ballard, La Carta de Oaxaca, serves the best Mexican in Seattle, and I hear the food at their Queen Anne Mezcaleria is also excellent. But I don’t go there to eat. I go to practice good drinking.

Each time I’ve taken a horsehide seat at Mezcaleria’s monolithic metal bar, my server has been a ponytailed 20-something named Spence. Spence speaks of mezcal with the illuminated gaze of a true believer. As part of his bartender training, he sojourned 10 days in Oaxaca and returned an apostle and ambassador. Conviction this deep usually applies to religion and politics. But mezcal holds a powerful sway—in its earthy, smoky palate; in the eons of legend and misunderstanding that shroud its history; in the low-tech, high-stakes method of its production.

Mezcaleria’s Holy of Holies is a dimly lit chamber secreted behind the bar called the Classroom. Here, sitting among a dozen other acolytes, I participated in a mezcal tasting in early April. Leading the way was a young woman named Andrea Hagan, a representative of La Mezcaloteca, a nonprofit based in Oaxaca City that’s essentially an archive of locally made mezcal. La Mezcaloteca exists because the social significance of mezcal is so great—as is the potential for losing its rustic peculiarity to mass production.

Hagan explained that there are hundreds of different species of the agave plant. Fourteen of them, each endemic to Oaxaca, are used to make mezcal, each bestowing a different character (whereas most wine is made from varietals of a single species of grape). Tequila, for instance, is mezcal made from quick-growing blue agave. Most bottled mezcals are made from espadin, which takes seven years to mature. Other, rarer varieties take up to 20 years to mature. The longer the plant grows, the more profound the taste of its liquor.

Most agave isn’t farmed, it’s foraged from the arid hills of Oaxaca. Generations of mezcaleros have harvested the plants by hand and roasted them for days over mesquite in earthen ovens. The roasted agave is mashed by hand or burro-powered mill, then open-air fermented, then triple-distilled. The stuff that Andrea brought for us to sample—fecund, aromatic, revelatory—isn’t available in the U.S. Too small batch, too rare. But the evangelists at Mezcaleria offer dozens of varieties, each a door into another world that’s not so far away.