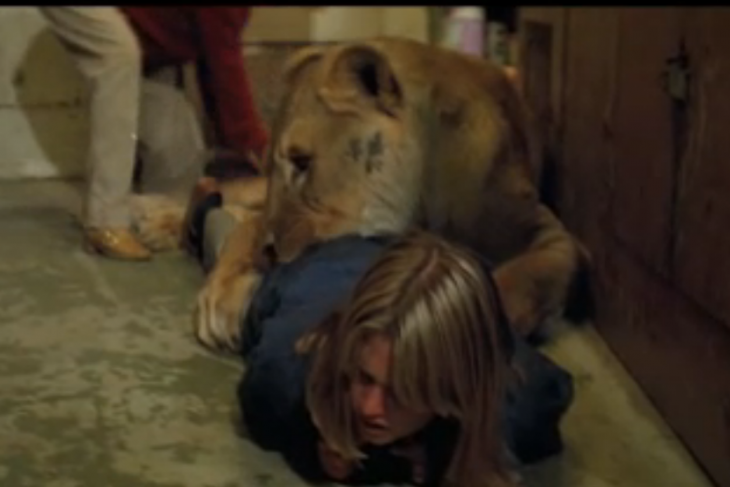 A still from 'Roar'

Monday, April 27
I recently had the chance to talk with Tessa Hulls and Tia Kramer about the future of The Project Room. Tonight, Rachel Kessler and Sierra Nelson visit TPR to engage in a conversation titled “If a Handful of Matches is Thrown to the Floor” about the “parallels between the scientific method and divination.” –Bill Carty
The Project Room

Thursday, April 30
Think Born Free as a snuff film, and you’ve basically got the gist of the bat-shit nuts 1981 vanity-project Roar. Exorcist producer Noel Marshall wrote, directed and starred as a naturalist who invites his estranged family (including his real-life wife and teenage stepdaughter at the time, Tippi Hedren and Melanie Griffith) to visit his wild animal preserve. The preserve’s beasts then go gonzo. The entire cast interacted, unprotected, with very real (and untrained) lions, tigers, cheetahs and elephants. No animals were harmed, but 70 crew members took some major abuse (including Hedren, whose leg was fractured by an elephant, and Griffith, who needed reconstructive surgery after getting her head chomped on by a lion). Miraculously, no one died. You will never see a more surreal combination of bad-movie cheesiness and jaw-dropping real-life jeopardy. –Tony Kay
Grand Illusion Cinema

Thursday, April 30
The publication Pan (published 1895 to 1900 in Berlin) was a triumph of fin-de-siecle technology, providing deliriously colorful, large format lithographic prints of Art Nouveau and Symbolist art to the masses. A wealth of these prints are currently on view at Frye Art Museum and today Seattle artists Matthew Offenbacher, Neal Fryett, Jason Hirata and Mystical Orchid will be delivering a lecture in the form of an “experimental art dive into the web” that compares internet culture with print culture of yesteryear. It will no doubt be weirdly entertaining and informative. –Amanda Manitach
Frye Art Museum

Friday, May 1
In the heart of Capitol Hill, Annex Theatre is still pumping out wild and bold new work from the top of its rickety staircase.  As the neighborhood around it undergoes massive change, Annex’s late night variety show, Spin the Bottle, has been running continuously since the Clinton Administration, a massive accomplishment. This month’s edition includes playwright Kelleen Conway Blanchard reading her gory brand of smut and previews of Annex shows Bunnies (a musical about the rabbit infestation in Woodland Park) and H.P. Lovecraft: Standup Comedian! plus a handful of others.  –Brett Hamil
Annex Theatre

Saturday, May 2
What we have here is a trio of the Northwest’s best electronic musicians. Lusine (aka Jeff McIlwain) and Pezzner (Dave Pezzner) have been luminaries of Seattle’s dance music scene for more than a decade. Both specialize in a subtly stimulating form of tech-house, teasing synapses while simultaneously moving butts. Manatee Commune (Grant Eadie), a more recent arrival from the mean streets of Bellingham, casts sumptuous downtempo grooves in pure liquid sunshine. Heads will nod. –Jonathan Zwickel
Nectar Lounge