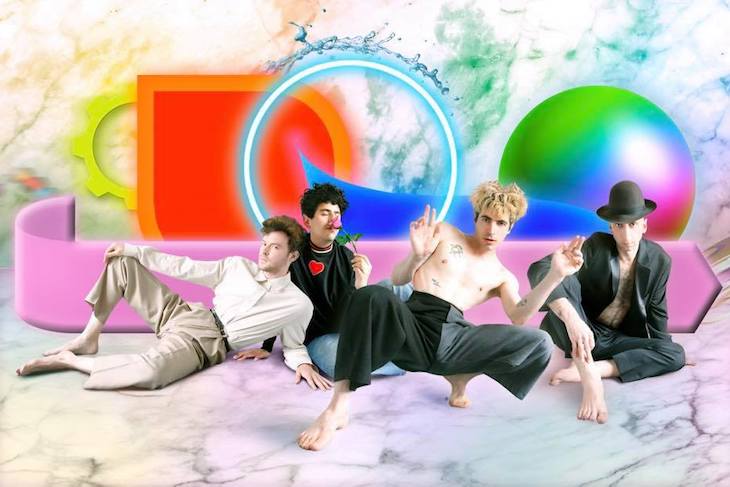 One half of new-wavy foursome Spesh is lounging in the cluttered rear dining room of a Peruvian chicken hot spot at the north end of Rainier Avenue. Vocalist Michael McKinney studies the menu through a medieval-style chainmail headdress scrounged from Goodwill earlier in the day; guitarist Sergio Mirazo speculates that such fashion would lead to a painful situation with his curly hair and declines to try it on. The two order nearly a whole roasted chicken between them, as any sensible men in armor might, and open up about their new album.

The one-two punch of McKinney and Mirazo was previously on display in the splashy indie/punk band Boyfriends, but most similarities between the two projects end there. Mirazo’s guitar work, once a beachy accelerant to McKinney’s excitable glam vocals, now appears as pensive arpeggio strands drenched in reverb. The tempos are slower, the vibe more The Cure than Vampire Weekend.

“After Boyfriends fizzled out, we wanted to keep playing music together, we just didn’t want to play the same kind of music,” McKinney says. “It was getting glammy, and we wanted to tighten up a little bit.”

On the surface, the 10-song Famous World is a high-level homage to the post-punk and slightly gloomy synth rock of the early 1980s. However, the band makes playful use of somewhat free-styled lyrics to keep the mood warm. For example, the line “Sometimes I just crave humiliation, put me on a choke chain, make me cry,” from second track “Tomato Road,” can be put in lighthearted juxtaposition with the album’s cover art, an intimate portrait of a dachshund on a chain leash who appears to be smoking a cigarette. (The image was licensed from a photographer who snapped the picture in the 1980s in NYC’s Washington Square Park.)“I hope that dog is still alive,” says McKinney. “[It’d be] like 700 in dog years.”

Acoustically, much of Spesh’s tighter sound is due to the behind-the-decks work of Ben Jenkens, who recorded the album over 10 days at his Killroom Studios last January. Jenkens had approached the band, which is rounded out by drummer Morgan Dixon and bassist Brian Yeager, in December 2017 after seeing them perform, and subsequently signed them to his label, Killroom Records, which he co-founded in 2016 with KEXP’s Troy Nelson.

The extended timeframe of the recording session was new to the band, McKinney and Mirazo especially, who were used to cramming studio time into short windows and emerging with a raw, live-like sound. The 10 days in the studio allowed Jenkens and the band to produce an album with a polished aesthetic, but occasionally left them with too much free time to question every detail of the songs. McKinney recalls spending an hour discussing the best way to end one song before simply agreeing to end it the way the recording came to an end naturally. As he puts it: “Sometimes you spend all this time looking for home and you realize you’re already in the living room.”

Famous World is bursting with light pop songs and fun, teased-hair dance numbers, but the political realities of 2018 seep through even here. About halfway through the record, on a song called “Orange Man,” the band takes a fire poker to the president, prodding with lines like “drive away that fascist to the grave,” though never explicitly mentioning his name, a trend they continue in person. Explains Mirazo: “I’m never ever going to go on a rant about that with anyone. I don’t even want to talk to people about it, [though] I’m just as distraught and grossed out by him [as others are].”

“It’s like a scrapbook entry or something,” says McKinney. “It’s like, this is what’s going down in 2018 and this is how I feel about it…but I don’t want to give that person a lot more of my thought time.”

As a contemporary cumbia rhythm blasts through the restaurant’s sound system, the duo contemplates how their retro-chic fits into the evolution of rock music. “It’s such a funny thing to think about—what the next sound in rock ’n’ roll is,” says McKinney. “I don’t think there’s a new one to be discovered, it’s more of like how can you mash up all these old things to make a new thing.”

Drawn to revisiting such “old things,” with Spesh, Mirazo waxes: “For me, what I like is little tidbits in certain songs—a little chunk of guitar or drums or something—that were recorded in a really weird way, but not on purpose. It’s like mystic music, and it’s fun also listening to people try to replicate it. I guess us included.”