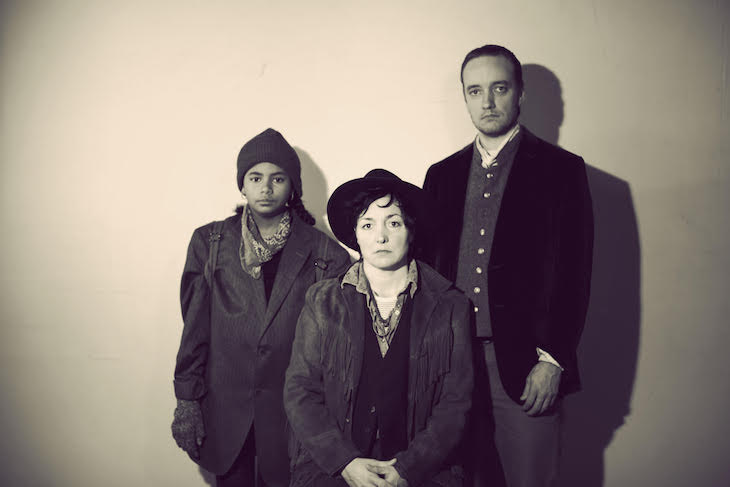 The curtain opens on two enormous misshapen cocoons and a scraggly tree on an otherwise bare stage. From within the cocoons two alarm clocks begin beeping simultaneously and both eight-foot-long carpet squares flop open to reveal jumbles of duffel bags and two strange characters. With kerchiefs tied across their faces and Nerf guns blazing, they jump to their feet on high alert, checking their surroundings in all directions. Deciding the coast is clear, they tug down their masks and set up camp. So begins a day for Patti & the Kid, instantly drawing last weekend’s audience at On the Boards into the curious world created by Frank Boyd and Libby King.

As the Kid—Boyd—makes coffee, Patti—King—sets up a boombox and lays out cassette tapes. Both unfold camp chairs. A coordinated routine on side-by-side islands, the two barely acknowledge each other, as if this morning ritual had been repeated many times before. They use a dolly and push broom to pass objects between the carpets or as a rolling raft to venture short distances over the black stage floor, emphasizing their isolation.

Their serious disposition and use of incongruous cultural artifacts has the audience laughing from the start. Accompanied by a peppy ’90s-era workout tape, the two perform an extended aerobics sequence, soberly at first and then with hip swivels and high kicks, stony faces glancing at one another with the edge of competition. In another moment they perform an intricately choreographed target practice, tackling their camp chairs, releasing a round of foam Nerf balls at a line of wind-up toys, and one tossing tissues in the air for the other to shoot down—all with the pent-up aggression of constant vigilance gone unused. It’s gut-bustlingly funny but also curiously sad. What happened to these people? They’re preparing themselves, but for what? The inefficacy of their lives is clear to the audience, but to the characters this charade is a comfort.

Their carefully constructed world shatters when a 10-year-old girl walks on stage. Kid leaps in fright to Patti’s carpet, a void formerly only crossable by dolly-raft. “Hi. Nice Place. I’m Tammy,” she says, the first words spoken in the show. Patti and Kid watch in nervous awe as, open and unafraid, Tammy (Maya Flory-Barnes Salas) reads them a poem she wrote. After she solicits a few wholesome jokes from the audience, Kid ventures one of his own. Rowing his dolly-raft center stage, his jokes give way to an affable monologue in a southern drawl. A former addict, Kid regales with stories of embarrassing inebriated episodes cut short by “the apocalypse” and a tongue-twisting list of Campbell’s soup flavors circa 2016. “We had it good, y’all,” he says.

Patti’s turn is next; she hesitates, but once she begins her monologue spills forth, a fragmented history of her life told in jilting snapshots. An engineer-lesbian mom, a sudden packing, a traumatic separation. She always interrupts herself before she gets to the word, so when she finally says “son” it lands like a heavy stone.

When Tammy leaves, Patti and Kid return to their routine, but things are different now. Patti privately steps off the carpet like she’s testing thin ice but quickly returns to her safe zone. “We could hang ourselves,” she says. The whole show feels like an homage to Waiting for Godot, referencing it explicitly as Patti and Kid test a belt for strength and it snaps in half, dashing their hopes for escape.

Each moment of Patti & The Kid is rich with purpose and detail, building a compelling, surreal world. Even with sparse dialogue, the show’s characters are achingly human. Patti and Kid, in all their ridiculousness, are clear reflections of ourselves, the realities we construct and our inability to escape them. This allegory is made clear by the transcendent arrival of Tammy, a beacon of youth and the future who’s able to see beyond what has always been.

Just before Patti and Kid roll up their carpets for the night, Tammy returns, this time with a  lantern and a small carpet of her own. “Ok if I play here?” she asks, setting up her square between them. They nod their approval and return to their cocoons, leaving Tammy alone. She closes the show dancing triumphantly to an M.I.A. song. “Survivor!” the song repeats over and over, Tammy a vision of hope in a twinkling pop landscape.