Studying poetry to become a cartoonist

A poet friend once told me that writing poetry is like simultaneously looking at Where’s Waldo? and The Magic Eye. You have to focus on an overwhelming minutia of details while at the same time maintaining a roaming looseness about the overall image. Successful poetry lives within this contradictory tension, this space where you get both the 3-D sailboat and all of Waldo’s misplaced glasses.

I did not intend to fall in love with the structural mechanics of poetry, but it happened because I was enacting a soft mutiny against my own mediums. The transformation began slowly: My attendance at art walks was gradually replaced by evenings spent at readings, and late-night conversations at the bar began to orbit around the delicately telescoping ways in which chords of words can be balanced and made to sing.

You see, I started reading poetry because I was stalking a very specific sort of unlearning: I was trying to become a cartoonist.

Both comics and poems are about reduction, about using the barest hint of word or image to insinuate the motion of a full-fleshed story. Each form works within a highly abbreviated space and employs the smoke and mirrors of rhythm, repetition and depth of focus to make the brevity of each mark carry more than its own weight. But the true magic of each medium lies within the distortion of time: The real work of a poem or a comic happens in the blank pauses on the page. 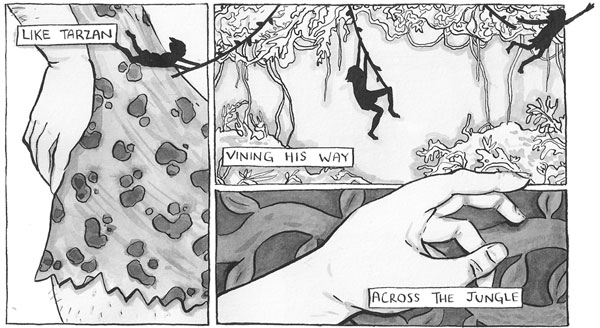 Like Tarzan swinging his way across the jungle, poems and comics dangle lines of text and panels of drawings as vines, providing something for the hand to reach out and grasp just as that purchase is most needed. But it’s in the interstitial space between those vines—in the gutters between panels, in the breaks between lines—that something truly extraordinary happens. During those empty pauses, the reader’s mind stitches the vines together, and it is the reader who constructs the immersive backdrop of the surrounding forest.

Coming from a background as an illustrator and writer, I (mistakenly) assumed that I basically knew how to draw comics. But I quickly learned that when it comes to being a cartoonist, the independent abilities to write and to draw are perhaps more hindrance than help. My first attempts at comics were word-heavy messes paired with undistorted illustrations of the things I was describing. I was effectively trying to fully depict Tarzan’s jungle and cram it into some ill-considered panels, and I didn’t know how to cure myself of the need to represent the world verbatim. I didn’t know how to just show the vines.

So I turned to poetry to learn the cadence of abstraction, to untether words and images from their literal meanings and instead use them as whispered touchstones. Poetry has taught me the vocabulary of sparseness, of how to work within the pause, to strike on the downbeat. And while I still have a long way to go in learning how to be a cartoonist, I am beginning to understand how to show what is not there.