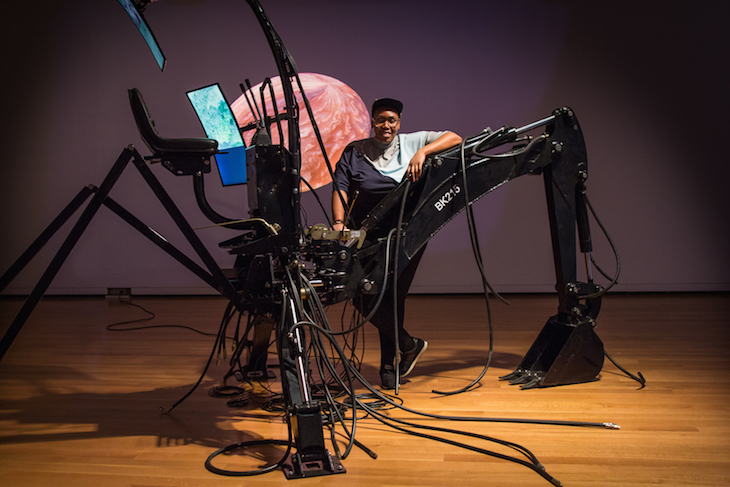 “You know what: I can’t lie,” New-Jersey based new media artist Sondra Perry says with a smile. “I am really interested in the multiplicity of beings.” Perry’s face is lit by bluish gray and then red light emanating from an overhead projector. On the wall behind her, a large rendering of a gray 3D blob spins and twirls until it morphs into a flesh-like, donut-shaped planet Mars.

It’s the day before the opening of Perry’s solo show at the Seattle Art Museum, Eclogue for [in]HABITABILITY. While curators and photographers come and go, members of the exhibition staff are trying to ensure the wall projections and three screens on a large black backhoe, stretching out into the gallery like a metal spider, are working properly.  In the middle of the bustle, Perry smiles. It’s her most ambitious video installation to date, and it wouldn’t have been possible without financial support from the Seattle Art Museum, which awarded her this year’s Gwendolyn Knight and Jacob Lawrence Prize.

When I meet her in the darkened gallery, she speaks softly and fast, her ideas and sentences tumbling over each other like waves without arrest. One can find a similar sense of intellectual excitement and multiplicity in Perry’s work, which consists of video screens, avatars, 3D renderings, sound, installation and Creative Commons film fragments—images from Google maps, YouTube clips, drone footage of nature. She uses computer systems to question real systems of power and representation.

Perry is only 31, but her piercingly smart work has already brought her to MoMA PS1, The Studio Museum, MoCA and The Kitchen. Thanks to the Gwendolyn Knight and Jacob Lawrence Prize, the artist returns to Seattle, the city where she had her first solo show in 2015 at local gallery INCA. “It’s been really interesting to be back,” Perry says. “I notice a massive amount of building, shifting, displacement. Not just in Seattle, everywhere. I’ve only been alive for 31 years, but it feels like it’s all happening really fast.”

The title of your show refers to bucolic spaces and their disruption. How do you relate that to mass displacement and gentrification?
The seed for this show comes from a story of displacement from the 1820s. Back then, there was a majority African-American village, Seneca, in Upper Manhattan. It was destroyed to make way for Central Park. I use it as the historical linchpin to understand how these things happen. Why are these places destroyed? Why are communities dismantled? And why is it replaced with an inauthentic realness? That’s what a park is: a manmade piece of nature in the middle of the city for people that can afford to leisure in it. The same thing happens with gentrification. People come in to build upon the authenticity of a space.

How can we see that in the show?
I use 3D rendering programs to think about “terraforming,” which is a term from Science Fiction referring to making environments [of other planets or heavenly bodies] suitable for life. I’m taking this out of the SF-frame to see it more broadly: We’re creating habitats, but what if there is already life? This graphics software, used by architects and city planners, is literally used to displace other people.

What do you do with this software?
I’ve used Blender, an open-source graphics program. It has an “ocean modifier” tool that you can create an ocean-effect with. It relates to the Black diasporic experience: In the context of the transatlantic slave trade, the ocean is a literal modifier to culture, bodies, movement. I’ve used Blender to also create these two balls of fleshy materials on the walls. It’s a highly modulated image of my skin gone through Blender and Photoshop at least 20 times to make it look like an organ, or a planet. I think of these balls as bodies.

How so?
All of the machines in my installations are labor machines. I see them as bodies, as laborers. I make the “labor tools” visible as a reminder that “objects,” technology, has a life—just like the people that made them. We talk about all the possibilities of technology, but most of the objects we use are not made here. Coltan [a dull black metallic ore used in electronics] is not mined here. The creation of these objects is not polluting our air here. I present them as bodies, as a reminder that there’s actual people that have to do that work to survive. We discuss Artificial Intelligence and machines as “sentient beings,” but that conversation should still be going on for humans.

In what sense?
Slavery. Were Black women machinery that pushed out babies? Were slaves people or just machines that helped build a culture and helped destroy land in the South? So if we talk about Artificial Intelligence and ask whether these “technological beings” have rights, that conversation is not over.

Why are you interested in the Internet and open-source technology?
I like the idea of using a program that you don’t have to install into a system. I see it as a way to subvert the system, the computer, Internet and connectivity—which you can think of as an institution with power structures. However, institutions, however racist they are and whatever violence they enact on different types of bodies, are also porous spaces. You can find openings to move resources in and out of, to make those systems work in the ways you want them to.  I’m interested in thinking about technology in the same way.

What are some other things you are inspired by?
My family. I use them in my work. I also still live with them. I’ve had a contentious relationship with them for most of my life, but I’ve learned to accept and love them. I realize now that’s because I always assumed things about them. I didn’t know who they are. In retrospect, I was not understanding myself, and by extension humanity, as a messy thing. Now I say: I don’t know who you are and we can still share experiences and take care of each other.

Do you extrapolate that to society and representation?
Yes, but it’s difficult. It comes back to abstraction: What are you willing to lose? Are you willing to admit you don’t understand something or someone? I was willing to lose my ego, so I gained these relationships. That’s how I want to live my life. It has always been pretty shitty, but in this moment in time, I’m hyper-aware of how I’m treating people and constantly trying to treat them better. And I’m going to keep trying.

Sondra Perry: Eclogue for [in]HABITABILITY opens tonight (Dec. 7) at Seattle Art Museum, with free access to the installation and collection. Perry will give a talk from 7–8 p.m. The event is sold out, but limited spots may be available immediately prior to the program. The artist and curator will be in the gallery for a short time following the talk.