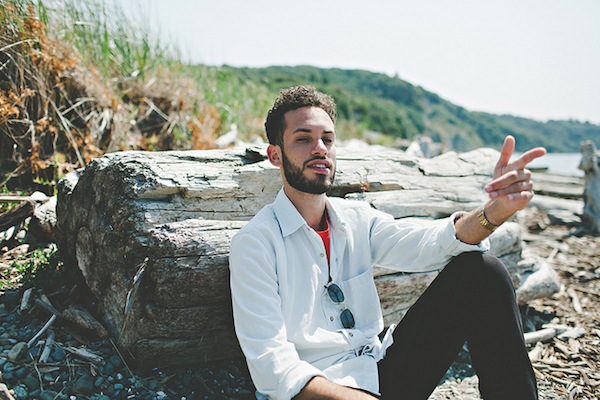 “I was convinced that I was gonna die,” says Sol Moravia-Rosenberg sitting at Victrola on E. Pine Street. The Seattle MC better known as Sol is recounting his exhausting four-hour bus ride through India in July 2012.

“I knew it was a big deal because all of the Indian dudes got up and raced to the front to yell at [the driver].” The driver was chewing a betel leaf, which is often mixed with cocaine, and swerving off road to pass each impeding vehicle. The interminable anxiety of the ride forced acceptance. “I got to think about the possibility of dying for an extended period of time. It gives you time to go through this whole thought process and eventually arrive at this point where you’re at peace with it. You can go back to sleep.”

That bus ride was a world away from where Sol had been. Months before, in January, he released his full-length album, Yours Truly. The album charted on Billboard and iTunes, thanks to the fan base he’d already built by releasing three free EPs. He’d played a huge set as Sasquatch and fielded calls from multiple record lables. Sol was consumed by his sudden success.

“All this shit that you think that you want was happening, but it didn’t feel right,” he says. “You accomplish these things that you’ve dreamed of and you’re still unsatisfied because you don’t have inner happiness. It’s a never-ending ladder.”

In the proceding months, Sol applied for and received the University of Washington’s Bonderman Travel Fellowship. Each year, the Fellowship gives a small group of students $20,000 to travel. In June of 2012, Sol sold out Showbox at the Market and then took off. “To leave at that moment was really valuable for me because in consciously jumping off of that ladder and going down my own path, it’s not even a ladder anymore. It’s more like a hike.”

It was an opportune time for an ambitious Seattle artist to take a hike. During Sol’s sojourn abroad, Macklemore released an album, became world-famous and restructured the self-conception of a smoldering scene. “Having that ladder and those goals and comparing yourself to your peers—it’s not healthy. And it can even become the doom of you as an artist,” he says. “Being able to be my own person and find out who I am, while I was really out there alone, gave me a lot of peace and comfort in coming back.”

Sol travelled to 10 countries—including Ethiopia, Uganda and South Africa—in 10 months. But, he says, “This was not a vacation. I was not comfortable, ever. I saw some of the most fucked-up shit. I saw how the world is. I saw how most people live.” As he moved through each new place, he let people guide his itinerary rather than tourist attractions.  “It was very trying both physically and mentally. Day-to-day trying to survive and also big-picture trying to understand what it is that you’re seeing and trying to process that.” The struggle between experiencing and processing peaked in his trip’s final month.

Sol spent his last four weeks in Haiti, his mother’s homeland. It was his first visit, and growing up proudly Haitian-American, expectations were high. “In my mind, I’m coming back home,” he says. But it wasn’t so simple. “Firstly, I’m Haitian-American. I’m half-white. I don’t speak Creole. I’m just a foreigner in most people’s eyes. At first, it was a tough pill to swallow, but it was important, because in reality, I don’t have the Haitian experience.” That harsh personal realization, and the harsher Haitian reality, was tempered by a stay with his aunt, whom he describes as a legend for her work opening schools in the face of colonial oppression. For three weeks they conversed about what he wanted out of his life and his career. “To go there and see the work that she’s doing inspired me. The conversations between my aunt and me were life-changing.”

He returned to Seattle in April of this year, greeted by a new set of challenges. The city was rife with construction and friends who acted like he’d never left. “I came from Haiti, the poorest country in the world, back to Seattle, and I sit down with my friends, and they don’t even have any questions. It’s like, when and how do you process?”

The answer was music. Over the summer, he and a small group of collaborators crafted an EP inspired explicitly by his travels. Eyes Open, the eight-song result of 10 months away and four months home, is maximalist pop-rap. The project is a continuation of Sol’s melodic, aspirational style, but it shoots through a wider lens; the sounds are more organic, the words more worldly.  Guitars, trumpets and strings integrate without seams. Drums are big, but they leave room for Nima Skeemz’s extensive percussion and Elan Wright’s live bass. With so much sound going on around him, Sol picks his words with rhythmic restraint. He never does too much. In doing so, he does more.

If the feeling crops up that Sol’s self-reflection borders on self-aggrandizing or self-mythologizing, it’s undercut by a clear-eyed authenticity, a sneaky vulnerability. What may strike as platitudinous—”Forget about the gangster shit/Forget about the money in the bank for a bit”— is ballasted by the fearlessness of his delivery. However, like Macklemore, his habit of distancing himself from the “average” rapper is, at times, uncomfortable. His boast that he’s “not trapped by geographical sounds” seems unfair after a free trip around the world. These moments are few, though, and his post-Apartheid parable on “City of Walls” is succinct and incisive.

At Victrola, Sol describes his travels and matrimonial devotion to his work with the same sweeping optimism and charisma present in his music.

“It’s the unfiltered experience,” he says. “That’s the only way I had to process. The music is the only person who’ll listen fully, without judgment. So thank God for music.”

Sol photo by Stacy Jacobsen. For more on Eyes Open, check out this behind-the-scenes video presented by City Arts, and see Sol return to Showbox at the Market on Nov. 27.