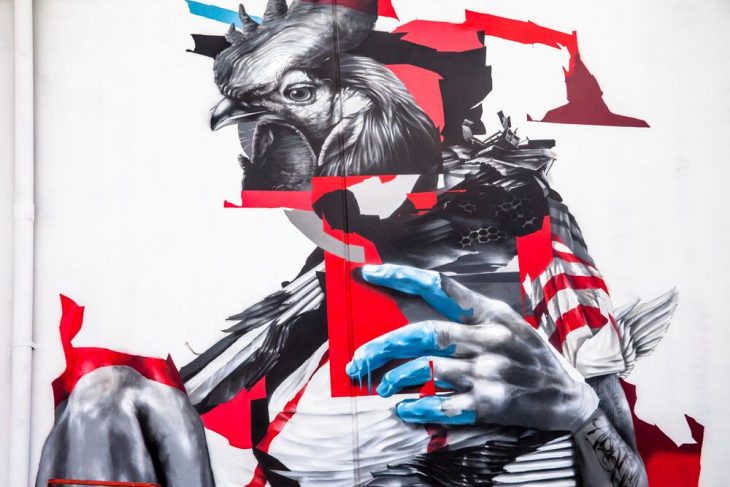 Along the backside of a building on 4th Ave. S, an iridescent wolf by Baso Fibonacci and Jean Nagai bolts through a city immolated in white-hot flames, then gives way to a wash of chilly blues and a portrait of an otherworldly woman by Joe Nix.

“It’s a response to the changing scenery—a hot take and cool take on it,” says Gage Hamilton, curator of SODO Track, the mural project that runs along the train tracks parallel to 4th Ave S. “From Joe’s side it was more like staying in Seattle and working with the evolving tech industry. Baso’s like, The city’s on fire—get out! Two viewpoints on how to navigate the city as an artist.”

Hamilton and I are walking along the Track, loose rocks crunching beneath our feet. The entire block, which butts up against the West Seattle Bridge, is covered in half a dozen murals that blend together at the seams. In total, a two-mile stretch of the landscape has been transformed by murals—many visible only from Light Rail, train or bus—since the project began in 2016, funded by 4Culture, Urban Artworks, Sound Transit and SODO BIA (Business Improvement Area).

“This was a collective dream,” says Tamar Benzikry, public art project manager at 4Culture. “After years of dreaming I demanded, ‘This dream deserves a plan.’”

On July 15, 20 local and international artists begin a 10-day burst of painting along the track to complete the project, which comprises a total of 60 artists and 32 buildings.

“I’ve never seen anything quite like this undertaking,” says Hamilton, who is based in Portland, where he runs a nonprofit that places murals around the city. “There’s opportunities for artists to get involved in the changing scenery, to make sure there’s a place for them to be cemented into the cultural value of the city.”

Christopher Derek Bruno is among the latter group. “A lot of the other mural projects I’ve done have had a pedestrian-minded approach,” Bruno says. “But this is a purely transit project. It’s amazing in that it changes people’s passive experiences, whereas a lot of other projects are trying to activate very active areas.”

As a young artist, Bruno’s canvas was train cars. Now a sculptor, he participated in the 2017 segment of SODO Track; his striated rainbow colors spill across the roof of a building on 6th Ave. S, visible only to Light Rail passengers. This year he’s returned to the program as a resident at Western Neon School of Art, which is partnered with SODO Track to offer past muralists the chance to experiment with neon for the first time.

“When we started this project it was with the intention of starting a conversation in Seattle about street art,” Benzikry says. “My razor focus has been on this two-mile stretch, but it’s always been with open eyes for what can happen next.” She and 4Culture are now working with private developers in South Lake Union, Bellevue and beyond.