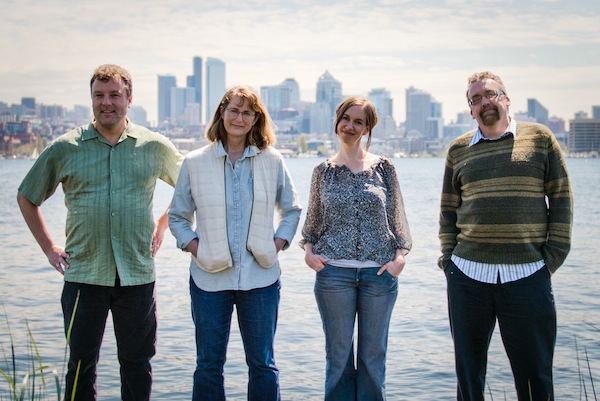 There will be no talking animals in local playwright Scot Augustson’s new one-act, Milwaukee, one of the four new local works that make up this weekend’s first-ever Sandbox One-Act Play Festival. SOAP Fest is the second big creative project to spring from the Sandbox Artists Collective—the theatrical talent hive behind Leslie Law’s quarterly old-time style radio show Sandbox Radio. In addition to Augustson, the playwrights are Emily Conbere, Paul Mullin and Elizabeth Heffron, all Sandbox members and local theatre heavyweights. Augustson, who is best known for his fast-paced, cartoon-like style, talks about exposition, one-acts and defining his fellow playwrights’ aesthetics.

Festival producer Amy Love said that this play is different from your usual style—is that true?
It is. Paul [Mullin] challenged me. He said write something completely realistic, with no flashbacks, no talking animals, just start to finish, no cuts in time. The thing that kept chewing at me is no one likes exposition—it’s giving you the background information but it can so often be clumsy. Because in real life we know our histories but we don’t talk about them. So what ended up happening is it’s a play that you think is all exposition and then you find out that there’s actually no exposition. I’m hesitant to tell any details because there is a bit of a reveal so I would either be drastically misleading you or giving away the point of it.

Would you say that exploration of exposition is the theme of your show?
Exposition is kind of a theme in terms of our complicated lives. One thing that you find out early on is one of the characters is suffering from the beginnings of dementia. When you think about all the crazy details of our life kind of taken apart, any one piece is just confusion. And so trying to build anything out of that can be very frustrating, especially when you’re trying to find something out.

What is unique about the experience of either writing or watching a one-act?
All of theatre should have a certain economy to it, but I think that’s especially true in shorter works. It’s more akin to a poem than it is, say, a novel. Sometimes just a small glimpse into a world is better than that whole world explained all the way. And I’m no theater historian, but if you think about greek plays they’re short compared to our modern full-lengths. Oedipus could run about an hour and yet it’s very structurally satisfying.

How would you describe the other playwrights?
If you gave me a five-minute piece I’d be able to guess who wrote them, but to describe them….I wanna say that Emily is more dreamlike, not in terms of “Ooh dreamy” but in terms of the internal, bizarre, logic that a dream might have. She has that magical realism strange world sort of thing. Paul’s work always has some kind of an edge to it. But then he of course is also not realistic. Elizabeth definitely always has some sort of complex relationships going on.

You haven’t read the other three plays yet. Any hypotheses about shared themes that might emerge?
Let’s go with alienation and American life.

The Sandbox One-Act Play Festival runs this Thursday, Friday, and Saturday at 8 p.m. at the Erickson Theatre. Pictured above from left to right playwrights Mullin, Heffron, Conbere, and Augustson. Photo by Ann-Margaret Johnson.