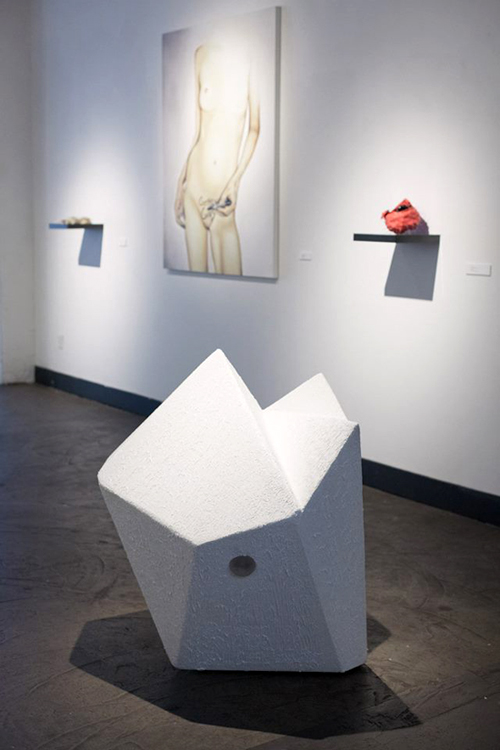 Cliff is a sculpture that’s also a porn star. He’s currently hanging out at Vermillion, as part of the Touch Me: I am Violent show (mentioned in last week’s column). Greg Lundgren constructed Cliff of multiple, cliff-like planes, the peaks of which invite all kinds of adventuresome frottage. He has one single, puckering hole buried low down at an awkward angle. It contains the guts of a Fleshlight. I’m not sure what’s transpired at the site of the sculpture over the course of the past week, but Cliff‘s orifice is kind of sticky now, speckled with a dingy stardust of dirt and grime. He’s definitely been fingered.

During an artist talk and roundtable at Vermillion on Tuesday night, Lundgren recounted the history and inspiration of the piece:

“The Italian government realized the importance of maintaining their cultural heritage as tourist destination/revenue and created a team to restore statues and other important works that had accumulated years of pollution, grime and whatnot. When the restoration crew got below the immediate grim, they discovered that many of the figurative marble sculptures were covered in protein stains. Upon analysis, these proteins turned out to be semen and reflected hundreds of years of activity. The thought was that men would sneak about at night and rub up against the sculptures, marking the porous surfaces with their cum. It’s too good of a story, and too believable to make up.”

Lundgren can’t pinpoint the exact source of this story nor find reference to it on the internet. But I believe him.

It’s almost gone with the wind now, but at the SOIL New Members show this month, new member and longtime Seattle artist Margot Quan Knight exhibited a series of untitled acrylic paintings. The catch: They were made by her very young son, Thomas Coglon. 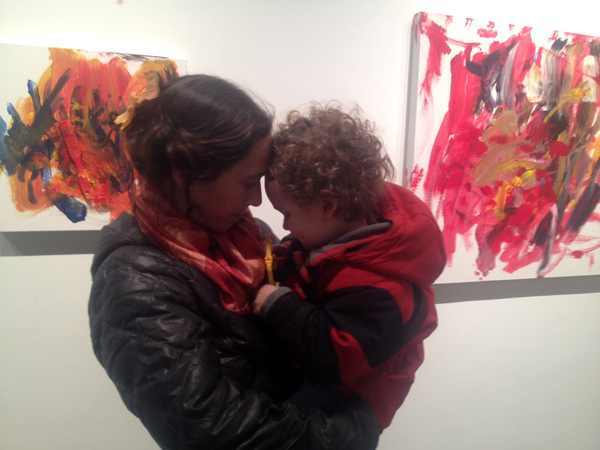 Plenty of folks (SOIL members even) weren’t thrilled at what some perceived as a conceptual cheap shot. During the opening, the artist ran through the gallery insisting at high volume, “I made that! I made that!” Another gallery-goer—an adult artist—morosely commented about the kid’s behavior, “That’s basically what we do at our openings too, only a lot later.”

Also on view is Jessica Dolence’s video (or “digital drawing”) The Waiting Room. As organ music plays, we float through pastel clouds, then through a pastel sea, passing through series of doors upon doors slowly opening. Dolence calls it an animated allegory of purgatory. This digital candy-raver vision of afterlife-as-mis-en-abyme concludes by zooming in on a portrait of St. Teresa of Avila roasting over rainbow flames. I could watch Dolence’s video pieces all day long.

Julia Heineccius’ Dirty old twins were lying on the floor not far away. Two gold boxes rest side by side. One half of the diptych is a found cardboard box—a big, gaudy, gold gift box—and the other a replica in brass, the perfect simulacrum, an indistinguishable, glittery trickster. 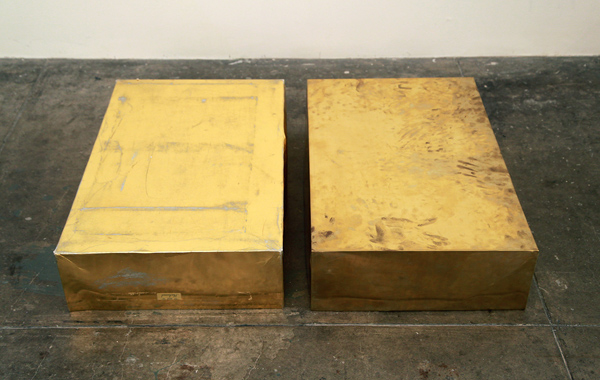 Other individual pieces from March group shows stood out, burned on the brain long after the mayhem of their well-attended openings fizzled. Like Janet Galore’s Imp of the Perverse, also part of Touch Me: I am Violent at Vermillion. At first glance it’s simply a plugged-in pop up toaster resting next to a butter knife. In an exhibit now plastered with signs warning against alteration and overhandling or marked with explicit instructions for interaction, Imp is notable for its lack of explanation or instruction. If you do get bold with the butter knife—or if you plunge a hand in—the carriage inside the slots begin to quiver. A male voice moans. With more fingering or knifing, the toaster erupts in a paroxysm of pleasurable groans and sparking light.

Tiny buttons on the toaster have been altered to read

SO
WRONG
SO
RIGHT 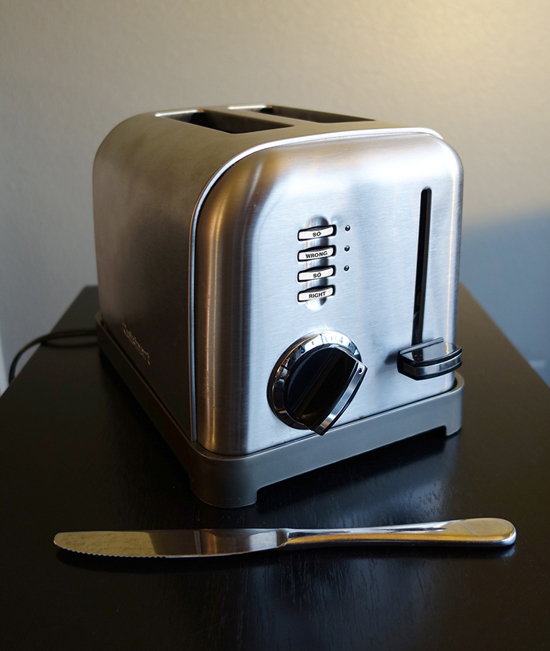 Last night at Northwest Film Forum, a room of intellectuals, artists and academics gathered to deconstruct Beyoncé’s ass-forward brand of feminism, as seen in her latest, eponymous visual album. First we viewed the album in its entirety. Viewers danced in their seats (and sometimes jumped out of them) as Queen Bey’s ginormous, perfect, airbrushed face smoldered, framed by her ginormous, perfect, ever-changing weaves. Then a panel convened and compared Beyoncé to the Hottentot Venus, Josephine Baker, Grace Jones, Foxy Brown and Wonder Woman.

The conversation went, predictably, round and round in little circles of suspicion, adulation and befuddlement. Will we ever solve the riddle of what feminism is right now? I kept thinking how if it had been Miley or Britney or Nicki up there singing exactly the same songs with exactly the same visual direction, the conversation would be risible. But there’s something about the palatability of Beyoncé that makes us feel her glittery, milquetoast feminism should be taken seriously. Her beauty and wealth and talent and bougie childhood and bevy of male movie directors and L’Oreal sponsorship shouldn’t get in the way of us receiving her message of self-affirmation and female empowerment: I can lose my unwanted baby weight and still look good dry humping a Lambo, creeping around little kids and strippers in the 4th Ward or on rollerskates, all those bitches after Jay Z be damned. PS. I’m a grown ass woman and I’ll do what I want!

Everyone is generally in agreement that Beyoncé never once claimed to be a feminist in this album, nor that it was proffered as some kind of feminist overature. But now that everyone’s talking about it, of course this is feminist and she is a feminist (she says)! She will have her cake and eat it too. Which is fine, because it means we can have our cake and eat it too, guilt-free. And by cake I mean Beyoncé. And by eat it, I mean….you know, feeling warm fuzzies about feminism while rubbing one out to her perfectly accessible, perfectly sexual, perfect-on-the-auction-block body.

Images courtesy of the artists.