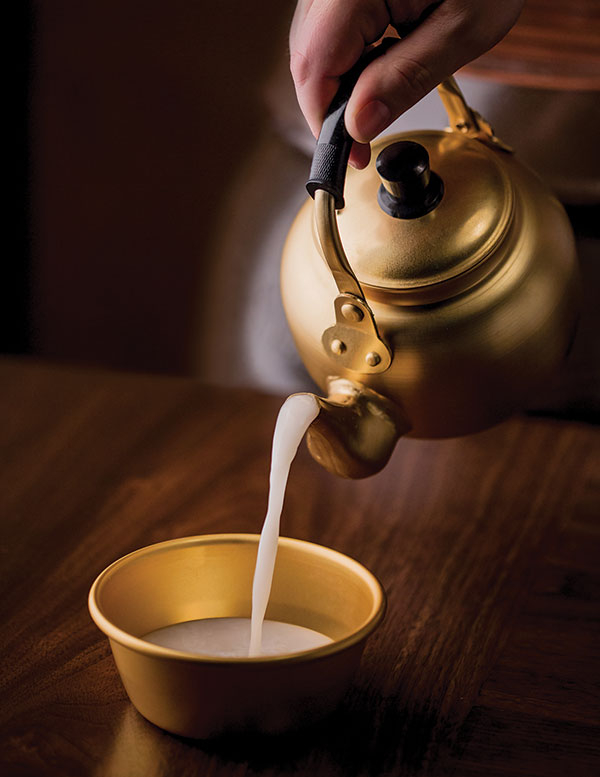 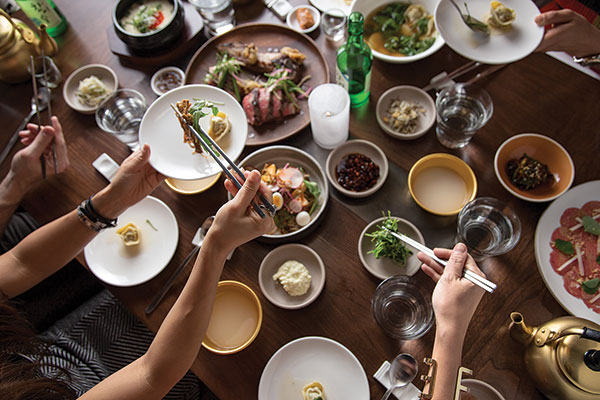 A thousand-year-old elixir is reborn in Pioneer Square.

How do you cut the peppery, unctuous blaze of fennel kimchi? Or a mouthful of pork belly and grilled apples smothered in red-chili gochujang?

Developed by Korean farmers a thousand years ago, makgeolli (pronounced mahk-ohlee), was Korea’s alcoholic drink of choice for nearly a millennium. After falling out of favor with younger generations, makgeolli has recently experienced a renaissance in Korea and is again emphatically chic. Hikers organize climbs around drinking it. Beauty products are made from it. There’s a makgeolli diet that touts the beverage’s nutritional value—high in B vitamins and amino acids—as well as its fatigue-busting buzz.

Traditionally served in bowls, makgeolli hits the tongue with a brightness and tang that’s jarring at first sip. The flavor and carbonation combine like kombucha and unfiltered sake. Makgeolli is sold in stores in the U.S., but unless you’ve been to Korea you haven’t had the real deal—a wild, living drink, unfiltered and unpasteurized.

That changed last month when it appeared on the menu at Girin Steakhouse, the nouveau Korean restaurant in Pioneer Square. As far as the folks at Girin know, they’re the only people in the country legally brewing and serving makgeolli in its original form.

“I had real, alive makgeolli for the first time in a little tented restaurant outside a fish market,” he says. “I was like, oh my god this is so good, so different.”

Determined to reproduce the experience back home, he scoured the Internet for the scant English information he could find, then commenced an eight-month-long rollercoaster of trial and error to produce a beverage he liked.

Among the many variations of makgeolli recipes Burns found, he settled on danyangju, one of the least complex and also one of the last recipes taught in traditional brewing classes.

“Because it’s so basic a lot of things can go wrong with it,” Burns says. “It’s like baking with simple ingredients—there’s a big difference between the best croissant you’ve had and the worst, right?”

The first ingredient of Burns’ recipe is a California-grown sweet rice that’s steamed al dente. After cooling, the rice goes into the clay pot along with filtered local water and Korean-sourced nuruk, the fermentation element that makes makgeolli makgeolli. Nuruk is a coarse grain that looks like Grape-Nuts; when compressed into a hockey puck shape and moistened, naturally occurring mold blooms and sets the fermentation process in motion.

Fermentation lasts only a week, but after bottling Burns lets the liquid set a few days to build up natural carbonation. “After a couple weeks, it starts to get weirder, and that gets into the realm of personal preference,” Burns says. “I enjoy it; some may not.”

Girin offers two styles of makgeolli, served in small brass bowls: Lunar Brew is a lighter, diluted version of the drink with a 7-9 percent ABV. Samjoko is the undiluted, cask-strength version at 12-14 percent ABV.

The Lunar Brew is equally tart, milky and sweet, with notes of toasted rice, peach, nectarine and white grape. Imbibed with Girin’s ssam plates and seasonal dishes like persimmon kimchi—a bite of flesh that melts in the mouth like honeyed fire—or the piquant gochujang and scallion duck sausage, the clouded, ice-cold makgeolli cuts through the burn with sweet relief.

“Here the culture is to go out to eat and we order drinks,” Burns says. “In Korean culture, it’s the other way around: People go out to drink and order food to complement the drinks. Makgeolli is one of the backbones of that way of living.”