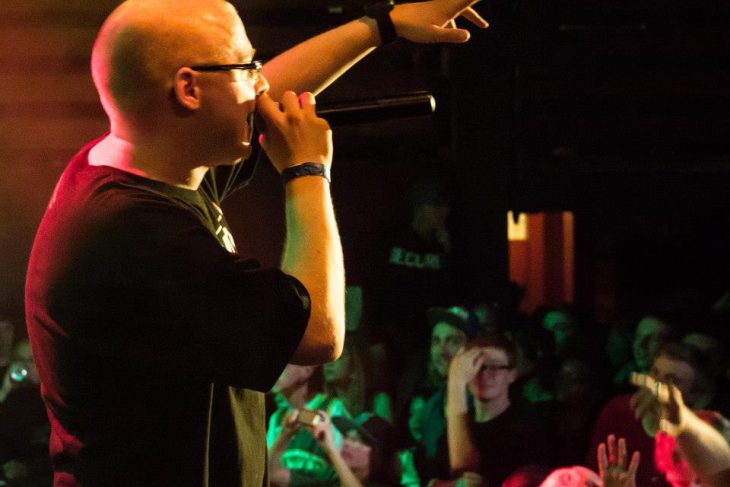 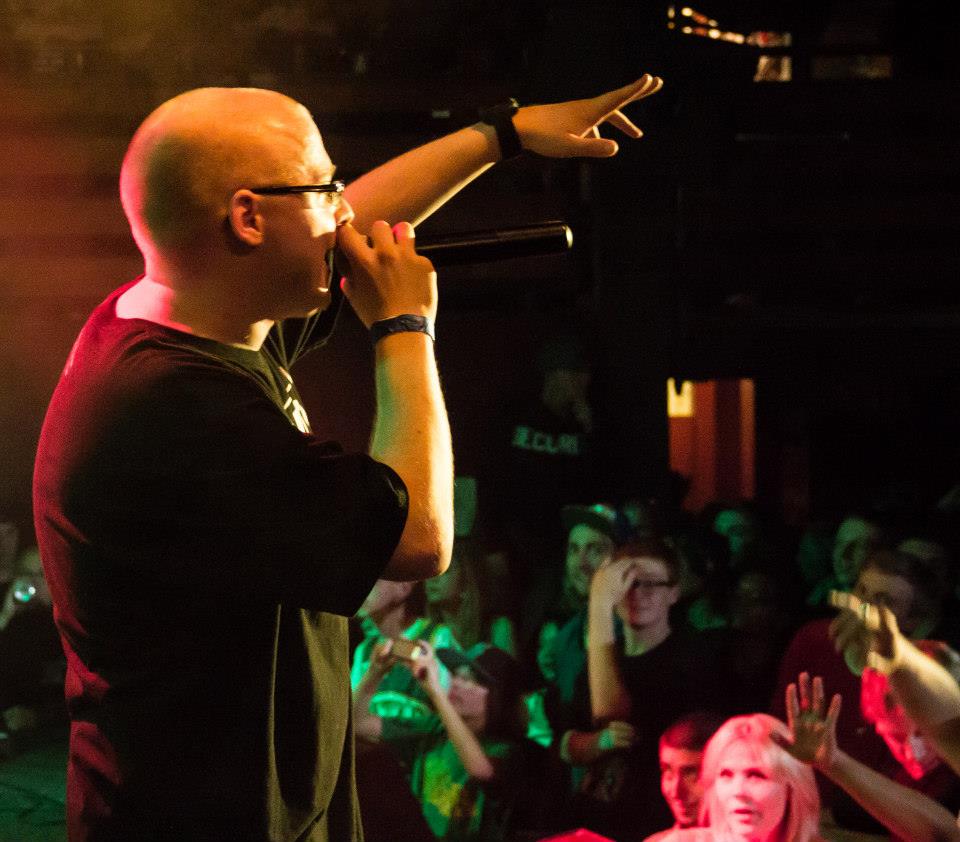 At his sold-out album release party at the Crocodile earlier this month, Grynch called a surprise guest to the stage. West Coast crooner, gangster-rap stalwart and frequent Snoop Dogg collaborator Kokane joined Grynch to perform their song “On a Good One.” Kokane was followed by a second surprise: a golden-spandex-clad woman, who danced for the song’s duration then vanished.

Later, when Grynch performed his most popular song, “My Volvo,” he was mobbed by the exuberant cast of Seattle’s hip-hop microscene, including Macklemore (enjoying a rare flicker of normalcy), Sol and Blue Scholars’ Prometheus Brown.

With his buzzed blonde hair, pale skin and wire-framed glasses, Grynch—aka John Overlie—confounded visual perception so well that Kokane’s presence somehow made sense. And his positivity filled the Crocodile with a palpable sense of nostalgic camaraderie. But after Overlie’s decade-long prominence on the Seattle hip-hop scene, playing the role of magnetic everyman has grown complicated.

Overlie’s fourth album, Street Lights, sources a radiant palette of soulful beats that welcome his rich, textured voice. “Dope beats and dope rhymes” is the mantra, the cause and the effect. Overlie shrugs and smiles at his struggles, often omitting their details and painting them with broad strokes of hope and personal responsibility. His words are comfort food that appeals to our less-muddled sensibilities. Yet in our eagerness to embrace his positive spin, it’s easy to miss the album’s lurking turmoil and vulnerability.

Overlie gained traction in the mid-2000s by releasing a consistent stream of albums, EPs and mixtapes full of young-man nostalgia and battle raps. His commitment to the local community— befriending participants and attending shows with Cal Ripken Jr.-like persistence—paralleled the scene’s rapid maturation and development. His presence and his music are equally interwoven into the fabric of Seattle’s hip-hop identity. His own bubbling popularity boiled over in 2009 when he wrote a song about his car. After the buzz of “My Volvo,” Overlie’s presence remained. Only his purpose wavered.

He created less and drank more. It took him two years to release his third album, Perspective, and though he says he’s still proud of the effort, he admits certain sections sound phoned in. Upon its release, Overlie was uninspired and the album’s promotion suffered.

“I went through a serious period of time within the past couple of years where I was legitimately fucking depressed,” he says. “I think a lot of people would be surprised.”

Overlie spent the last two years working to overcome that depression. In the process, he learned to rid himself of expectation. He stopped dwelling on missed opportunities and started appreciating small, “goofy” moments like getting too high at West Coast legend Warren G’s house and being fed tacos and milk. He began writing and recording songs that countered his disappointment with acceptance. Soon, he was waking up eager to listen to his new material.

Overlie rediscovered his passion for rapping and Street Lights is the result. Overlie complicates his persona in subtle, endearing ways: He details the experience of his first girlfriend getting engaged on The Bachelor, the difficulties of having sex while living with his parents and the gray area between “bubbling and struggling.” He’s still shrugging and smiling, but now we get to see exactly what he’s looking at. It’s his most complete album to date. And for the first time in years, Overlie is content.

“I feel like I won with this music shit a long time ago,” he says. “Knock on wood, I could stop rapping tomorrow and I wouldn’t be mad about shit.”