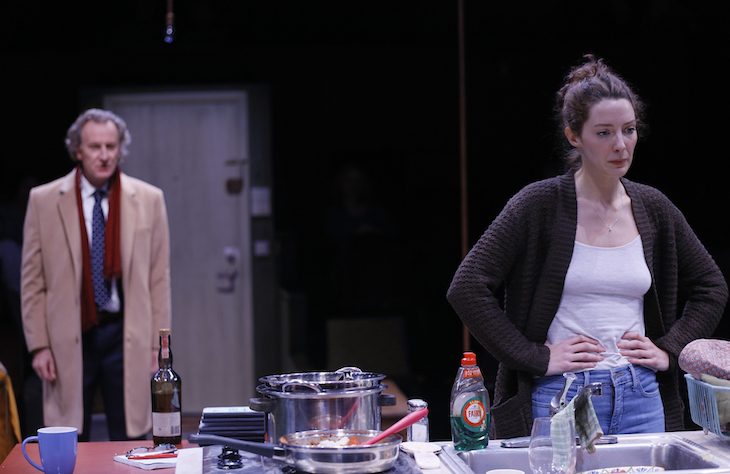 Water clink-clink-clunks through old pipes behind paper-thin walls while Kyra (Elinor Gunn) sheds the vestiges of a long day—heavy winter coat, stack of student workbooks, bag of groceries—and her bath fills. But her relaxation is snatched away before it begins when she’s interrupted not once but twice by figures from her past, who thrust back into her own lost love story in David Hare’s 1995 play Skylight, now running at ACT Theatre directed by John Langs.

First, 18-year-old Edward (Michael Monicatti) comes by to tell Kyra how poorly his dad, Tom, is doing following the death of his mother, Alice. Later, Kyra pulls herself from the tub to throw down a key for Tom himself (Daniel Gerroll), an older, successful restaurateur, loose-limbed and comfortable in an expensive suit. From the way they look at one another when he finally walks in, it seems like it’s been a million years and no time at all.

While Kyra cooks her spaghetti, Tom paces her flat (cozy, clever scenic design by Julia Hayes Welch), circling and drinking whiskey as they rehash arguments that, it seems, they’ve been having for years. He complains about banks and business, she rolls her eyes. “For God’s sake, I’m telling a story. If I say it, it’s true,” he says, all faux-frustration and real entitlement. She admits she’s given up watching the news—in fact, she doesn’t even own a television—and he scoffs at her self-righteousness.

The details of their affair unfold slowly. Hare never floods an audience with stilted exposition, instead, he drips out the story as Kyra and Tom dredge up old memories, remembering and misremembering the life they shared and the people they shared it with—namely, Tom’s wife and family.

Unlike many plays from the mid-’90s, the issue with Skylight isn’t whether it’s aged well or poorly; rather, it hasn’t aged much at all, despite being firmly anchored in another time. There are gentle markers of the past—CDs, references to the Yellow Pages—but the internal arguments and emotional machinations feel contemporary. That these two people were ever in love sometimes seems ludicrous, but Hare brilliantly teases out the social issues and generational attitudes that divide them while keeping the electric, energetic current that draws them together pulsing underneath. Over time, Tom’s accusations shift from “you left us” to “you left me,” one of the elephants in the room all along.

It was Alice’s discovery of the affair that ultimately ended it; now, a year since her death from cancer, Tom strolls back into Kyra’s life, offering to set her up with central heating and a cheese delivery, appalled by her low-rent lifestyle. For Tom, substituting unwanted gift-giving for actual empathy seems to be standard operating procedure. She finds his ostentation selfish, he thinks her choices—living in a rundown neighborhood, teaching poor schoolchildren—are an affectation. Tom’s an old-school sexist, classist and capitalist, a rich guy who thinks Kyra’s throwing away her potential by working for peanuts. Kyra’s a tired idealist whose monologue about the rich right-wing’s attitude toward public service jobs garnered hefty applause: “They sit pontificating in parliament, in papers, impugning our motives, questioning our judgments. And why? Because they themselves need to feel better by putting down everyone whose work is so much harder than theirs.”

Whether you’re on the right or the left, Hare sees everyone’s bullshit but treats it with equanimity and compassion, never betraying his own opinion on the matters by skewing moral authority toward Tom or Kyra for too long. This isn’t a perfect production—some of the British accents are intermittently wobbly and the emotional outbursts thinly motivated, and I could do with far less random pointing as an action. But that didn’t dull, for me, the searing ordinariness of the story, animated by Gerroll and Gunn’s evolving anger and grief—his explosive, hers brittle, both sad. Langs, along with his excellent design team, has perfectly balanced this heady cocktail of comedy and tragedy, romance and political drama.