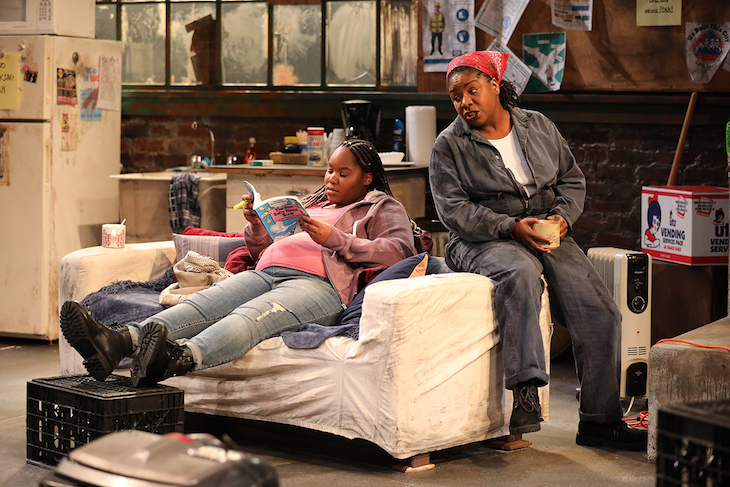 Within a cluttered Detroit auto-plant break room, a woman’s presence looms large. She’s the heart and soul of this place—“I’m in the vents. I’m in the bulletin boards. I’m in the chipped paint,” she says—and she doesn’t take any shit. When she walks in one morning to see a handwritten “No Smoking” sign addressed specifically to her, she pulls a pack of Newports out of her shirt and lights up.

This is Faye, played in ArtsWest’s production of Dominique Morisseau’s Skeleton Crew by the inimitable Tracy Michelle Hughes in a performance that easily traces the “gruff with a heart of gold” character outline before shading it in with plenty of more interesting nuances.

Skeleton Crew is the third part of a loose trilogy of Detroit stories by Morisseau, set in the grip of 2008’s recession. Outside the break room where the entire play takes place, talk of an auto industry bailout is swirling, with many opposing voices advocating leaving the city to bankruptcy.

Inside this room, the anxieties are more personal. Faye, a union rep and nearly 30-year veteran of the job, can see the writing on the wall, but struggles to get a straight answer on the plant’s inevitably doomed future from foreman Reggie (Allen Miller III). Younger workers Dez (Charles Wright) and Shanita (Allyson Lee Brown) are naïve enough to be sanguine about their professional future. Besides, she’s pregnant and he’s saving up to open his own body shop—their minds are typically elsewhere.

Morisseau’s script lands somewhere between the moral fervor of Arthur Miller and the naturalistic languor of Annie Baker. The play’s threads of conflict—secret knowledge about the plant’s fate, stolen auto parts, a gun hidden in a locker—are rarely its engine. The finely tuned dialogue alternately rings with passion about the plight of the black working class and luxuriates in the familiarity of coworkers shooting the shit about trivialities.

Compelling studies of all four characters emerge. Dez’s aggressive flirtation toward Shanita is underpinned by genuine feelings. Shanita has one of the play’s most moving monologues as she opens up about the pride she takes in her work as a second-generation auto worker. Reggie wears his shirt and tie like armor, but his affinity for the working-class origin he shares with everyone else keeps seeping through. And Faye, so quick to dispense wisdom or care, would prefer you didn’t offer her any. Hughes’ defiance and charm is the centerpiece here, but it’s worth tearing your eyes away from her to take in the other fine performances.

Morisseau’s focus on character over plot allows for opportunities to complicate the relationships. The three plant workers seem naturally aligned against Reggie, whose Boy Scout insistence on toeing the company line is a perpetual irritant. But Faye understands him differently. Reggie has known Faye since he was a child and speaks warmly about her son. When Faye challenges Dez and Shanita on her son’s name, they come up empty. Skeleton Crew evokes a sense of community—family, even—among these people, then punctures it. Survival is often a solitary pursuit.

ArtsWest’s production, directed by Jay O’Leary, has a lived-in feel, from Burton K. Yuen’s excellent set (equal parts dilapidation and homey comfort) to the easy, and occasionally uneasy, familiarity between the characters. Interludes feature the characters miming work on the line, their bodies rolling and rattling like they’re cogs in a machine. But the play never loses sight of the humanity of the people in it, and Morisseau’s affection for her characters extends to a coda that paints things in a perhaps incongruously sunny light. It’s an easily forgiven indulgence; outside of these walls, things aren’t getting better any time soon.