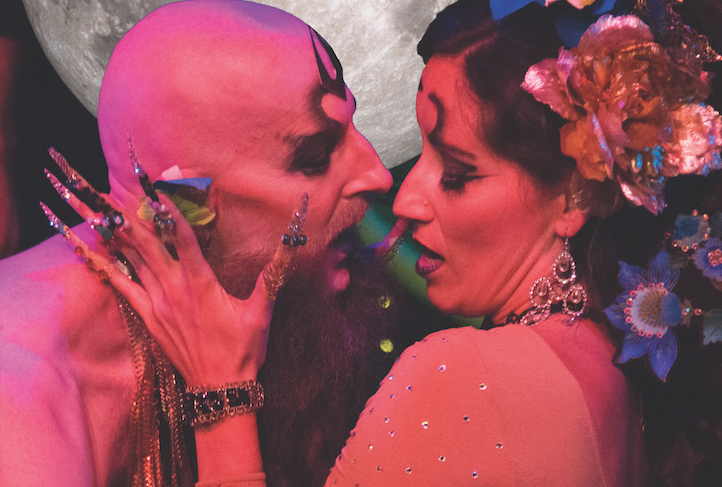 After 12 years of stripping, shimmying and smart, sexy storytelling, the members of Sinner Saint Burlesque are parting ways to focus on other pursuits. Before going, however, they had one final treat for Seattle audiences: A Midsummer Night’s Reverie, which played this last weekend at Theatre Off Jackson, was a swan-song show that further proved that parting is such sweet sorrow.

With a bit of tinkering to the original Shakespeare script, Sinner Saint transformed the classic play into a sex-positive love fest. A genderqueer Puck (Diva le Déviant), sporting glitter mustache, pasties and codpiece, guides us through the moonlit mayhem, which switched with ease between iambic pentameter and raunchy dance numbers and music ranging from ‘80s to dubstep to classical.

Sultry stripteases appeared in clever ways that were not only on-theme but advanced the story. When Pucks searches for the magical flower to create their love potion, they come upon a glittering Polly Wood, whose blooming transformation suggested a different sort of flower as the key ingredient. This kind of clever double-entendre was ever-present in the interpretation of the script. For instance, when discussing the possible colors for Bottom’s fake beard, Evilyn Sin Claire held up a variety of merkins to choose from.

The bickering between the King and Queen of the fairies was reinterpreted as a jealous fight over a willing and nimble sex pet (Lovely Lady Delirium), complete with leather straps and ball gag. Oberon (Waxie Moon) and Titania (Doña Dei Cuori) engaged in a hilarious dance fight overflowing with sexual tension. Mid-altercation, their faces come close and filled with desire until, at the last minute, Titania slaps Oberon away. The pet, meanwhile, slithers between the fighting pair, threatening at any moment to turn the whole thing into a decadent ménage à trois.

Sin Claire is the creative director of Sinner Saint and played the role of Bottom, the overenthusiastic actor who’s transformed into an ass. Sin Claire is also at least eight months pregnant; watching an almost full-term pregnant woman get down and dirty in a donkey mask is comical and life-affirming. She commanded a sexual power that’s not often portrayed in moms-to-be and epitomizes the big-hearted spirit of the production.

In the same vein, the original love triangle was tweaked so that upon waking in the forest, Hermia falls for Helena, and Lysander for Demetrius. The rearranged language works so seamlessly, you’ll wonder why it wasn’t originally written that way. The resulting seductions are hilarious, heartwarming and unapologetically sexy. Lulu La Lune as Hermia is particularly outstanding, both with her playful delivery of the lines and in her striptease choreography. She takes her time with each garment, then punctuates the slow tease with quick peekaboo moments, keeping even the umpteenth reveal of the night surprising and fresh.

A Midsummer Night’s Reverie is laugh-out-loud funny from start to finish, the Shakespeare is recited with clarity and wit and Sinner Saint’s variety of bawdy dance numbers in sumptuous costumes are all neatly woven into the story. Burlesque can often favor the soloist, but a particular focus on group numbers makes this production especially sultry (just imagine a whole host of fairies fawning over each other). Sinner Saint’s joy is infectious—and they have plenty of love to go around.