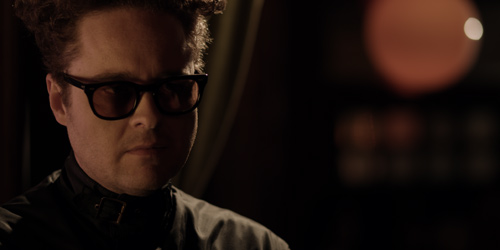 Shadowed is the cinematic equivalent of that delicious-looking donut sitting on a plate in the office breakroom, whispering your name. The ultimate nutritive value may be questionable, but it’s made from quality ingredients and goes down irresistibly.

The movie’s initial set-up plays out in textbook thriller style. Five pals go on a camping trip deep in the Olympic Forest, ostensibly to mourn the still-unsolved death of one of their own. Wrinkles in the fabrics of their friendships begin surfacing, and soon one member of the group is discovered dead from a stabbing. Things get outright nasty as the body count increases and skeletons come tumbling out of closets in epic numbers.

Seattle-based director Joey Johnson’s feature debut represents a pretty rare bird in the local film community. It’s not an introspective indie drama and it’s one of the few homegrown genre flicks in recent years that dares to serve up its chills relatively free of irony or revisionist nose-thumbing.

The downside to Johnson’s straightahead approach comes from his script, where some promising tangents are undercut by too-literal execution. Why have a character tell us something’s happened, then follow the exposition with a sublimely crafted visual representation that would push the story forward just fine on its own? Part of the magic of a truly great thriller is letting the audience put things together for itself.

Fortunately, the director is an expert craftsman able to power through a screenplay’s rough spots with considerable panache. Shadowed counters a relative absence of violence with a maximum of unease, and Johnson plays the audience like a fiddle. He also recognizes the gold in Charles-Henri Avelange’s excellent score, utilizing its lean menace to accommodate the visuals brilliantly. With its handsome location photography in the remote forests of Washington state and throughout Seattle proper, the movie looks way classier than your average formula thriller.

Shadowed also serves as testimony to how fully a stable of good, persuasive actors can sell a genre film. Conner Marx makes for an unaffected, appealing everyguy lead, even as he does some pretty rotten things. David S. Hogan, a charismatic local actor bearing a slight resemblance to Guy Pearce, provides an intense contrast as the most tightly-wound member of the party. Alison Monda plays the wisecracking buddy with enough honest charm to make her cliche role feel real. Best of all are Tara Simmons, whose air of unearthly strangeness lends wonderful ambiguity to her actions, and Sean Nelson, who effortlessly steals his scenes as a fey criminal sleazoid who could’ve wandered in from a David Lynch movie.

In an era when even the most slipshod thrillers proliferate cable networks and Netflix, Shadowed possesses more than enough jumps and craftsmanship to warrant a wide audience. It makes one eager to see what Johnson has up his sleeve next.