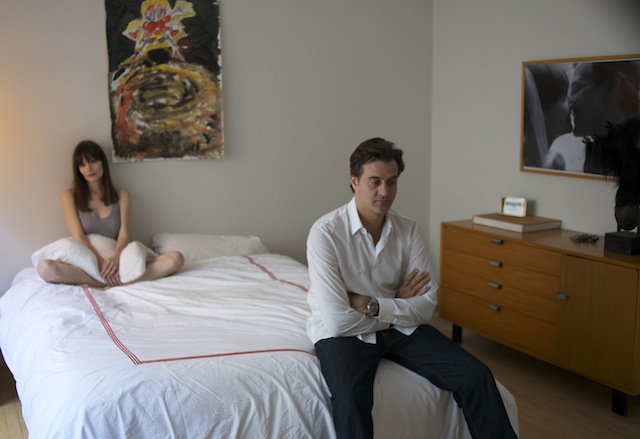 Like most romantic comedies, Mutual Friends follows a standard structure involving one person in love with another person who in turn is in love with someone else. Dysfunctional, emotional and laced with witty banter and one-liners, this film is guaranteed to get some laughs. But Mutual Friends, directed and co-written by Matthew Watts, doesn’t focus on one relationship. Instead, as the title suggests, it follows a close-knit group of friends—and some friends of friends, and some strangers—throughout a day leading up to a surprise birthday party.

But surprise parties often don’t go well, especially when there are strippers and a ninja involved.

On the morning of the big bash, Liv (Caitlin FitzGerald) shuffles her fiancé Christoph (Cheyenne Jackson) off to work so she can run around New York getting the cake, decorating the apartment and creating a special memory box for her future husband. Her friends—who are all equally as beautiful and affluent and apparently don’t have to work for a living—go through their day struggling with relationship problems. Paul (Michael Stahl-David) feels trapped by his uptight wife Beatrice (Christina Cole) and advises the just-rolled-out-of-bed musician Nate (Peter Scanavino) to enjoy his freedom while he can. Meanwhile, Christoph’s ex-girlfriend Annie (Jennifer LaFleur) flies in from LA and shows up at Trish’s house just in time for Liv to arrive and (of course!) feel obligated to invite Annie to the party.

Across town, Sammy (Ross Partridge), who’s Liv’s brother, skips work, corrals his stoner assistant and stalks his wife Adele (Annika Peterson) to their upstate cabin, convinced that she’s cheating on him. Sammy and Liv’s other brother, Thomas (Devin Burnam) the goofy law school dropout, shows up at Liv’s apartment right as the evening’s bartender cancels. He offers to help find another one and Liv hesitantly agrees. Thomas “auditions” a group of people, eventually settling on the quirky Jana (Shannon Esper)—a stripper who helps him shop for kitschy party decorations including a piñata and sticker nametags.

Nate shows up at Liv and Christoph’s apartment, bringing up a fling that he and Liv had over Memorial Day—the same weekend Christoph proposed. In a wonderfully subtle scene, Liv reveals her true emotions through body language and facial expression while telling Nate to leave.

By the time Christoph walks into the party, everyone is drunk, mad or uncomfortable due to someone else in the room. The party spirals into immense chaos, completely pushed over the edge when Liv’s ex-boyfriend Cody (the amazingly awkward Derek Cecil) shows up. He also happens to be a high-level karate master. To no one’s surprise, the party doesn’t end well, but the movie does.

Mutual Friends is a pretty typical rom-com with some stereotypical characters, but they feel real. Each of the characters and their plotlines are created by a different writer; perhaps that’s what makes them believable. With a different person behind each arc,  a wide range of personality and life experience emerges—a new voice and angle for every one of the actors.

I felt like I was watching my friends. Granted, they aren’t affluent and living in Manhattan high-rises, by they’re in relationships and have complicated lives. And that’s where the film works—the emotions, actions and reactions of the characters are not only believe, but relatable. We empathize with Liv—evcen though she’s spoiled and slightly neurotic—because we’ve been caught in a tangled mess of confused love. And as the wonderful montages of New York slip by throughout the film, the focus on motion (trains, walkers, airplanes, cars) reminds us that yes, our lives might be complicated and dramatic, but life goes on around us, and if true love is meant to be, it will happen.