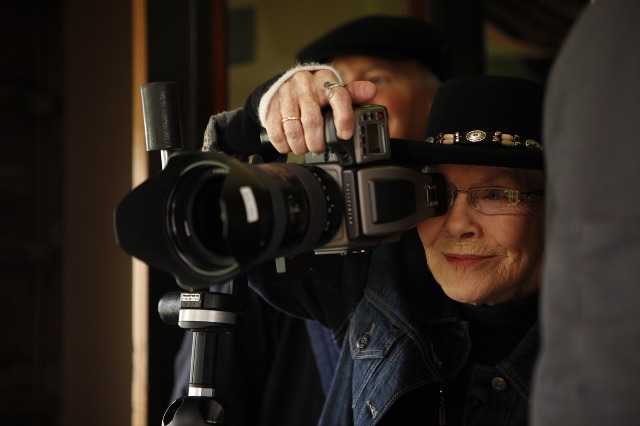 In Her Aim Is True, Jini Dellaccio finally gets her due.

You might not recognize the name, but if you’re familiar with this history of Northwest rock you’ve seen her photographs, like the iconic covers of the Sonics’ albums Here Are The Sonics and Boom. But Dellaccio stopped shooting bands by the end of the ’60s and her work became forgotten until a resurgence of interest in the forerunners of the grunge movement.

It took a Brit to bring Dellaccio’s story to the screen. Karen Whitehead, now based in DC, is originally from the UK, where she produced and directed current affairs programs for the BBC. Her film covers most of Dellaccio’s story, from her days as a sax player in a jazz band to her discovery of photography while living in Chicago. Dellaccio originally picked up a camera simply to document her artwork; eventually photography became the art itself.

While living in California, Dellaccio became a fashion photographer, something that influenced her later work with rock bands. Dellaccio moved to Gig Harbor in the early ’60s and was tapped to photograph the Sonics when one of her pictures was seen in a local exhibit. Dellaccio placed the band on the grounds of her spectacular home, shooting in black and white, creating the kind of look that becomes an instant classic; no artifice, no cutesy posing with props, just the band members stripped to their essence, surrounded by the natural beauty of the Pacific Northwest.

Several of the musicians are interviewed about their experience of working with Dellaccio, and we also get to see her in action, when she’s shown talking with the Moondoggies before taking them on location for a photo shoot (at the picturesque Snoqualmie Railroad Station). In contrast to the stereotype of the fashion photographer (“Work it baby, work it! That’s beautiful!”), Dellaccio is calm and respectful, never ordering her subjects about but getting them as excited about the work as she is.

A few gaps appear in the story. There’s nothing about the years between Dellaccio’s fashion shoots and rock ‘n’ roll work, a time when she went into commercial photography and met the architect that would design her Gig Harbor home—a key location for her photo shoots. Dellaccio also shot big rock acts that played Seattle (the Rolling Stones, the Who), a period she discusses only briefly. The film also implies she stopped taking pictures by the end of the ’60s when the acts she primarily worked with broke up; she actually continued with her commercial work until moving with her husband to Arizona, where she put photography on hold while nursing her husband through a long illness.

But it’s great to see so many local photographers—Charles Peterson, Alice Wheeler, Lance Mercer—acknowledging Dellaccio’s work and influence. Her Aim Is True drew two packed houses at SIFF, and deserves to finds a wider audience. Check heraimistrue.com for updates.