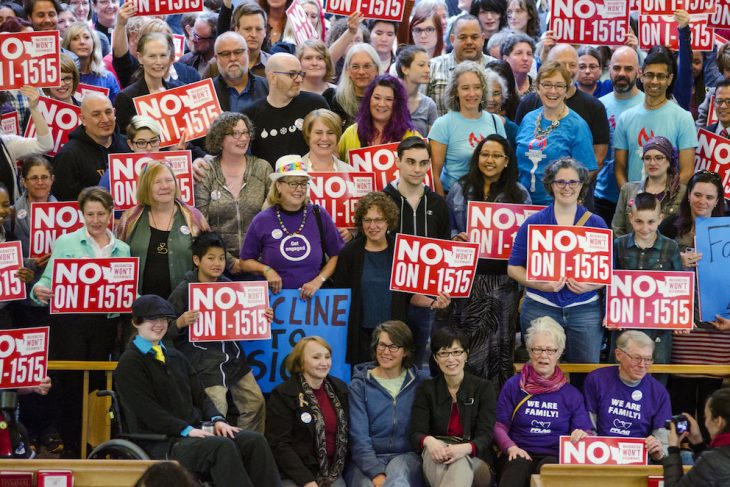 Filmmaker Vlada Knowlton established herself as a cogent, empathetic documentarian with Having It All, an hour-long doc about modern women balancing career, relationships and childhood that became the flagship of Seattle PBS affiliate KCTS-9’s Women Who Inspire documentary series. But The Most Dangerous Year, the Seattle-based writer and director’s latest feature-length film, hits especially close to home.

On the face of it, The Most Dangerous Year is a non-fiction chronicle of the fight against SB 6443 and I-1515, the notorious anti-transgender “bathroom bills,” the latter spearheaded by conservative Northwest activist Joseph Backholm. But it’s also an absorbing piece of human-interest journalism that offers an affecting glimpse into the lives of several trans children, including Knowlton’s own five-year-old daughter Annabelle.

Given the immediacy of the topic to its maker, The Most Dangerous Year is surprisingly evenhanded, acknowledging the role that fear and ignorance play in anti-trans sentiment without demonizing. Even Backholm’s cynical attempts to manipulate the ballot-initiative procedure are covered with the kind of measured observation that brings the point home without hammering it into viewers.

Knowlton sat down to discuss her challenges as a parent of a transgender child, the path that led her to direct The Most Dangerous Year and the thread of hope running through her cinematic labor of love.

How did The Most Dangerous Year come about?
Well before I even had it in mind to do a movie about this subject, my husband and I had our third child. And at some point, we realized she was not who we thought she was. I’m smiling now, but it was a very turbulent time for us. Eventually, when we came out the other side, we had a happy family and a happy child.

I knew my friend Aidan Key from a support group I’d joined for parents of transgender kids called Gender Diversity. He knew I was a filmmaker, so he came to me out of the blue and said, “There’s some really bad stuff that’s about to happen to all of us.” This was right before 2016, and he said, “I really need your help here. We’re under attack at this point.”

What was the process bringing in other parents of trans kids to tell their stories?
I knew them from the support group. Gender Diversity has hundreds of families involved. They were the ones who I knew were friends but also happened to be public, so they were already coming out to be public activists for their children. It’s not that easy to find parents of trans kids who are willing to talk in public about it. We’re all taking a risk by doing it, but we’re all doing it because we feel like you have to when you’re fighting for civil rights. You can’t be silent.

You’ve constructed a focused story from what must’ve been a wealth of material. What didn’t make it to the finished film?
There are a few things I decided not to include. But one of the key things I consciously decided to leave out—and not everyone agrees with this decision—was a lot of the footage of trans opponents that was showing a really dark and ugly side to the whole argument. I made the decision to put their best foot forward, to lay out in a very calm, reasonable manner the best possible arguments that they had presented. Because in my mind, even the most sensible, reasonable and intelligent arguments they can provide still don’t hold up.

This issue really stretches across party lines in unexpected ways. I was surprised to hear former Georgia ACLU Director Maya Dillard Smith taking an impassioned stance in favor of the bathroom bills.
And then there’s Senator Joe Fain, a Republican, whose vote became the deciding factor in the failure of the bills. That was a brave thing for him to do.

Did you see any anti-trans people change their opinions while you were filming the movie?
Well, there are different layers of anti-trans-ness, I suppose. The people on the extreme opposing end, the Joseph Backholms of the world, are most likely gonna go to their graves thinking what they’re thinking.

But there’s a spectrum there. You get to the middle of the spectrum and it’s just a lot of people who don’t have a lot of information. And when that information was available to them, I saw some wheels turning in their heads. You could see their fear getting chipped away.