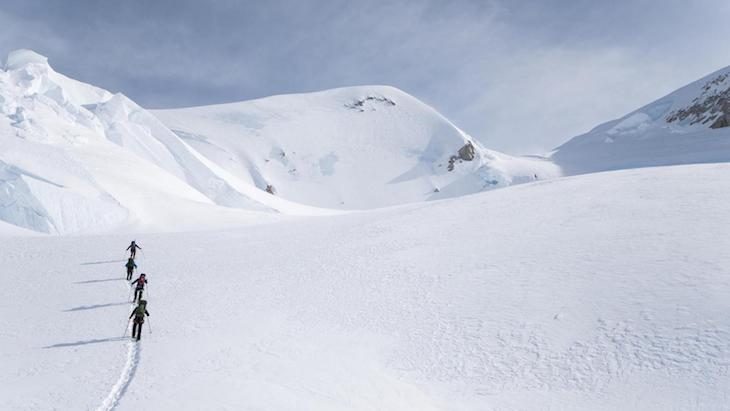 A fascinating footnote in American history occurred in 1965 when Senator Bobby Kennedy and mountaineer Jim Whittaker summited Mt. Kennedy, a previously unclimbed, 12,000-foot peak in Canada’s Yukon Territory. The Canadian government named the mountain as a tribute to Bobby’s brother John, the U.S. President who was assassinated in 1963. After meeting in Seattle in 1964, Bobby and Whittaker, the first American to climb Mt. Everest and the CEO of REI at the time, determined to make Bobby Kennedy the first person to set foot on the top of Mt. Kennedy. Which, remarkably, is exactly what they did.

The ostensible heart of the 80-minute film is the relationship between Jim and Bob Whittaker, the son named after Bobby Kennedy, who became a Jim’s close friend before his assassination in 1968. Born in 1929, Jim lives up to the Greatest Generation he was a part of—tall, soft-spoken, imposing and authoritative, he was the natural choice to lead America’s first Everest expedition, not to mention become REI’s first full-time employee and, later, a famed blue-water sailor.

In stark contrast, Bob is a card-carrying member of Generation X. A fair portion of the film is dedicated to recounting his gonzo, beer-fueled brodowns with Mudhoney, the band he road managed in the mid-’90s, complete with nude hotel room destruction and grievously dangerous stage diving. Sub Pop founder Bruce Pavitt and a weirdly thick-tongued Eddie Vedder provide wide-eyed testimonials to the young Whittaker’s prodigious consumption and bulletproof constitution, the latter calling Bob a legend and the former attributing some of grunge’s popularity to Whittaker’s ambassadorship. Whittaker went on to be a music industry veteran, tour managing REM and the Yeah Yeah Yeahs during his career before bailing out at some point to pursue other ventures, including, eventually, environmental activism.

Bob’s transition from rockstar scion to conscientious steward of a 30-mile trail in Eastern Washington is left untold in the film, as are the details of Bob and Jim’s relationship. Unlike Bob, Leif, the younger son by almost 20 years, followed in his father’s footsteps, climbing mountains and documenting local cultures around the world. But we never find out what Bob’s youth was like in his often-absent father’s shadow, or how his debauched career affected their standing, or the nature of Bob’s relationship to Leif, the overachiever. At the beginning of the film Bob says he can’t remember the last time he saw his dad, even though they both live in the Puget Sound area. What drove them apart? How do they really feel about each other? What’s it like to be the longhaired, reckless son of a rigorous, respected father?

The climbing project brings them into the same orbit, and at the end of it all elder Whittaker describes his pride in both of his sons—“they’re wonderful human beings, a credit to the human race”—but without greater backstory, the line feels scripted, a means to a happy ending more than an earned expression of genuine feeling. Deeper emotions remain buried unseen at the core of the story.

Likewise a critical point in the 2015 expedition is left too lightly touched. As the team approaches the push to the peak of Mt. Kennedy, they’re confronted with the ultimate choice, a fundamental, binary decision the ramifications of which could haunt them for the rest of their lives. Instead of lingering with these inexperienced mountaineers in this potent moment, Becker juxtaposes it with RFK’s assassination. In terms of storytelling, it’s a brilliant move, pitting climax against gutting climax. But as overall import goes, there’s no way the personal compares to the gravitas of the historical. Perhaps it could’ve if the camera lingered on Bob and Chris in their moment of crisis, but the story moves on.

This sort of time-travelogue juxtaposition happens throughout the film, the events of the past cast in the heavy significance of history while the present-day relationships that drive the film don’t get corresponding treatment. RFK’s assassination will forever be seen as one of modern America’s defining moments; as they’re presented, the same can’t be said for a commemorative mountain-climbing adventure or a wayward son’s attempted reconciliation with his iconic father. The shadow of America’s midcentury greatness simply looms too large and we’ve fallen too far from the days of Camelot for things to resound with as much meaning as they once did.

Even in the 1960s Seattle was already figuring into the American consciousness: After his climb and subsequent friendship with Whittaker, RFK more fully embraced environmental preservation as a platform of his Presidential candidacy. The Northwest was Whittaker’s platform and, like much of the stunning photography of this film, it spoke for itself, dwarfing human endeavor as folly, demonstrating its own ultimate primacy. Turns out the heart of the film is the mountain itself.