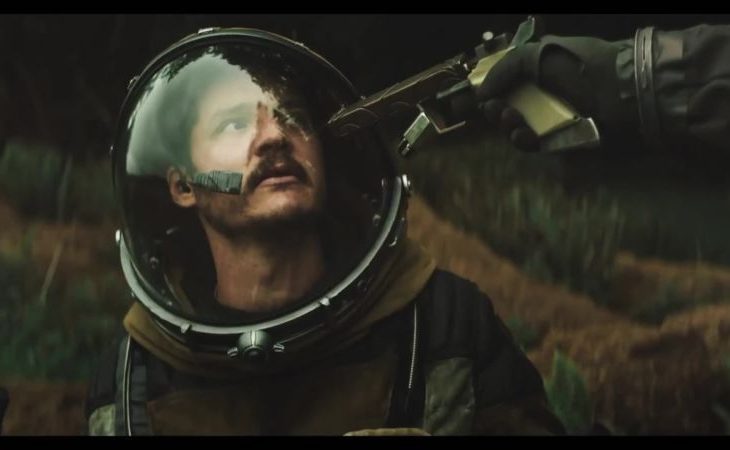 In the wake of Star Wars’ seismic cultural impact 40-some years ago, sci-fi cinema has largely become an intellectually bereft roller-coaster ride. It’s not hyperbole to say that storytelling and character development have taken a definite back seat to special effects and sensory overload in the ensuing decades.

Given that current blockbuster mentality, Prospect, the debut feature by Seattle-based writer/director duo Zeek Earl and Chris Caldwell, is a welcome anomaly—a lean, suspenseful and absorbing little indie that feels fresh even as it explores ostensibly familiar territory.

Prospect, a full-length expansion of their 2014 short of the same name, begins with galactic miner Damon (Jay Duplass) and his teenage daughter Cee (Sophie Thatcher) preparing for their spacecraft to be dropped onto a remote planet brimming with valuable alien gemstones. It’s a ticket to wealth if they can pull off the job without a hitch.

But things start to go south almost immediately. Their dilapidated ship crash-lands on the planet, and just when they’re starting to gain headway on their quest for riches, Damon and Cee run afoul of bandits and miscreants hell-bent on taking what they want at any price.

It’d be broaching spoiler territory to elaborate much more on Prospect’s plot. Earl and Caldwell aren’t packing any Sixth Sense-style twists, but they do a great job of shifting audience sympathy to some of the least sympathetic characters dwelling in their universe. And while Prospect’s roots lie in the American Western, the end result is an effective, character-driven, visceral western that just happens to employ a science fiction backdrop.

Two factors distinguish Prospect from the vast majority of modern sci-fi cinema. First and most immediately apparent is its sense of detail and place. This is the galaxy as inhabited by the blue-collar 99%, not the shiny future posited by 2001: A Space Odyssey. Everything is run-down, worn and dirty in the universe that Earl and Caldwell have created. The windows of Damon’s craft are greasy with fingerprints, the consoles and controls uniformly dingy and crude, and everything from the ship’s interior to the space suits Cee and Damon wear feel duct-taped together. The writer/directors also make canny use of some of the Northwest’s opulent wilderness, with the outskirts of the Olympic Peninsula’s Hoh Rainforest playing an unfamiliar, mysterious and dangerous far-off planet with surprising effectiveness.

Prospect’s other massive asset is its cast. Duplass and Thatcher feel like a legitimately flawed and dysfunctional two-person family, a unit that’s as shopworn as the rickety gear they’re using. And some great character actors round out the ensemble: The Wire’s Andre Royo plays the leader of a rough-hewn mini-tribe of outcasts, and another graduate of that TV series, Antwan Glover, lends a sense of cool toughness to his role as the leader of a mercenary gang. The most engaging of the film’s supporting actors is Game of Thrones’ Pedro Pascal, whose initially murderous thief morphs into a sort of paternal space-age Western antihero—a more loquacious, space-suited version of Clint Eastwood’s Man with No Name.

Prospect’s ace in the hole is young Thatcher, who emerges as the films centrifugal force, a scrappy kid who’s vividly aware of the unknown dangers around the corner but equipped with enough backbone to forge ahead anyway. Simply put, there isn’t a single wasted moment or false beat in Thatcher’s work here. In casting her, Earl and Caldwell—to extend the prospector metaphors surfacing throughout the movie—have hit pay dirt.