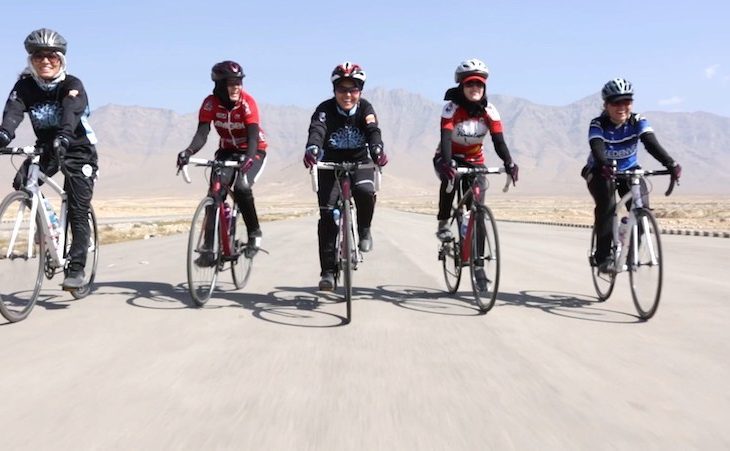 Afghan Cycles, the new documentary from Seattle-based director Sarah Menzies, begins with quiet beauty on a beach in Nice, France, as Frozan, a titian-haired young Afghan woman, walks the pebble-strewn shoreline. The lapping of the waves provides the only accompaniment to her contemplative voiceover.

She muses about her embattled homeland and how her passion for bicycle riding took her from the outskirts of Afghanistan’s Bamiyan province to a picturesque French city, some 4,000 miles away. Then the glittering waters of Nice dissolve into footage from four years previous, of Frozan and her teammates on the Women’s National Cycling Team of Afghanistan tearing along a remote Kabul road on their bikes.

That opening’s not just wonderfully cinematic. It suggests the beginning of an adventure, complete with all of the humor, harrowing tension, sheer terror and profound inspiration that come with it. The wonder of Menzies’ terrific nonfiction film is that it’s every bit as keenly observed, and its visual storytelling every bit as rich, as the most absorbing narrative fiction feature.

On the face of it, Afghan Cycles is yet another inspirational sports documentary, only the stakes of competition—and the potential consequences of competing—are chillingly high. Despite being respectful and dedicated Muslims, the young women of Afghanistan’s national cycling team must contend with the oppressive specter of the region’s extremist Muslim factions, who’ve frequently turned the country into a war zone. A woman riding a bicycle is considered a sin by many conservative Afghani, so harassment, death threats, physical violence and worse come with the territory for any woman cyclist.

There’s so much power and dramatic velocity loaded in Afghan Cycles’ basic subject matter that Menzies could conceivably get a pretty involving account just by pointing and shooting. But she’s created a fully realized saga here, beginning with the principal players.

Frozan becomes the movie’s focal point—and with her steely eyes, caustic but playful sense of humor and cocky defiance, she cuts a charismatic figure. But plenty of other distinctive and likable characters emerge as the film plays. Nahid, one of Frozan’s teammates, is a buoyant, pixieish spirit whose colorful bedroom is populated by Disney memorabilia and stuffed animals. Assistant coach Mariam is a serious young woman whose focused intensity readily extends from racing to speaking out against the oppression surrounding her.

Masoma, another teammate and Frozan’s best friend, trades jokes with her pal as the two fret about tests on materials they haven’t even read yet. And Zahra, founder and coach of the regional Bamiyan Cycling Team, eloquently captures the appeal of the sport: “When I am biking, I have two feet and two tires that help me get out of a bad situation faster.” Overseeing the women like a wiry Papa Bear is Abdul Sadiq Sadiqi, the team’s softhearted coach.

Like any great sports doc, Afghan Cycles serves up some inspiring set pieces. Just past the halfway mark, Menzies takes us to the Tour de Bamiyan, a co-ed cycle race, and it’s exhilarating watching these women literally leave their male competitors in the dust. And when they finally get to France to compete in the film’s last quarter, it’s impossible not to get completely swept up in the race.

The movie also offers a brief but well-informed history of the rise and erosion of women’s rights in Afghanistan, thanks to observations from Heather Barr of Human Rights Watch and Habiba Sarobi, Afghanistan’s first female governor.

But the movie’s ambitious storytelling extends far beyond the rush of a sports victory. The ugly reach of Islamic extremism taints everything and everyone it touches, and Menzies reveals its layers of hostility, sexism and ignorance with increased intensity as Afghan Cycles plays out.

The normally sunny Nahid breaks down as she talks about her younger brother, a victim of a suicide bombing at age 17. All of the women address the bullying and violence they face during public training with weary resignation. And in one bone-chilling scene, Menzies interviews an anonymous Taliban insurgent, his face hidden behind a scarf as he matter-of-factly asserts that any woman riding a bicycle in Afghanistan deserves to be gunned down.

Afghan Cycles doesn’t shy away from the harrowing nature of being a female athlete or, for that matter, being a woman in Afghanistan today. But the spirit driving these dauntless young women wards off potential bleakness, and the camera sails through Afghanistan’s deserts, roads and beautiful Islamic shrines with almost dizzying visual fluidity—the country’s a character in and of itself here. Prepare to be powerfully moved, visually dazzled and inspired in equal measure.