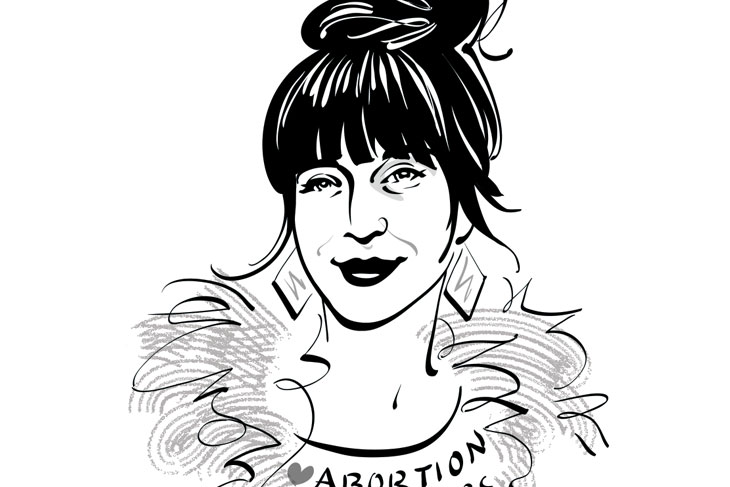 Shout Your Abortion went from hashtag to movement at lightning speed in 2015. Since then, cofounder Amelia Bonow has been working to center human experiences in the debate over abortion, manifesting everything from button-making parties to huge outdoor photo projections in cities across the U.S. Shout Your Abortion, a 239-page book out Nov. 1 from PM Press, edited by Bonow and Emily Nokes (who also designed it), collects the abortion stories of dozens of women in their own words, as well as interviews with providers and various abortion resources.

Why a book? SYA has done so much ephemeral, digital stuff.
It’s very much the first concrete attempt at a snapshot of what this movement is. Before the [2016] election, I thought this year would be about placing abortion in a larger context of reproductive life, including motherhood and miscarriage and stuff that might happen when you have sex. Then the election happened. And when our publisher hit me up, it seemed much more our speed to make a book that was a tool to share: This is what we’re doing and how we’re doing it and why and you can do it too.

How did you go about selecting the stories?
Geographical diversity, diversity of stories and of contributors was of utmost importance for obvious reasons. A person’s experience is shaped by their level of access and the cultural context in which they live, how much support they have—and that looks wildly different all over the country.

It seems like the work revolves around sovereignty and shame. When a woman breaks through the shame to tell her story, it frees her in a million other ways.
No doubt. That’s a through-line in the book, especially with the number of contributors whose stories involve some element of rape, domestic violence, sexual abuse, addiction or all of the above. People naturally frame their abortion experience—and the telling of it—as something that allowed them to process the shame and damage they experienced. Many people naturally frame their abortion as the first time in their life that they were like, I’m making this decision for myself, a moment of empowerment that had a ripple effect throughout their lives.

So, what’s it like to be working at the nucleus of a cultural meltdown?
We finished the book days before Justice Kennedy announced his retirement. One thing that’s beautiful in retrospect is how many contributors live in states where abortion very well may not be legal in two years, states that have “trigger laws” on the books—so if Roe falls, people who have abortions and people who perform abortions will risk immediate criminalization. These people knew that was a possibility when they chose to contribute to this book; that they did anyway is truly radical.

There’s nothing more inspiring to me than that absolute refusal to shut the fuck up. One thing to remember when something gets dramatically worse and people start freaking out: Some people are like things have been really bad for a long time, welcome to freaking out. If you’re the one freaking out that can feel minimizing; it’s important to acknowledge that things are about to get much worse. It’s going to get fucking ghastly. People are going to die and that’s totally real. At the same time, if you live in one of the seven states that has no abortion clinic or somewhere where an abortion clinic is 300 miles away or you can’t afford an abortion, the fall of Roe probably doesn’t feel like a new level of catastrophe.

The future is us learning to do abortions outside of the systems of federal regulation and capitalism because those systems do not mediate access to justice in equitable ways ever; they do just the opposite.

Has your courage changed while you’ve been on this journey?
I don’t experience very much fear—that’s always been the case. Before SYA happened I was feeling nihilistic and in some way the incident of courage that sparked [SYA] was part of a much larger trend of me not giving a fuck, you know? Not giving a fuck in a go-yell-at-cops, refuse-to-behave way. That shit is still there—but now I give all the fucks.

Does that feel like a gift or a burden or both?
It’s just a profound transformation. It’s been very disorienting. Now I feel responsible for taking care of my body so I can absorb things that other people with less privilege have disproportionately absorbed forever. It’s my duty as a privileged white woman to make myself strong and able to fight.

Bonow and various contributors read at Elliott Bay Book Company on Nov. 10. A book release party is Dec. 5 at the Neptune Theatre.