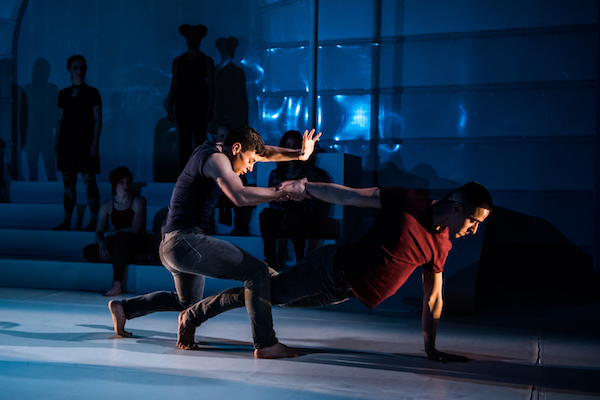 Nia-Amina Minor’s voice rings out. Calm and clear, but tinged with life-and-death desperation, her cadence reveals the deep fear of an all-too-familiar pattern of events. She is standing several yards behind Sherman D. Wood, who suddenly drops to the ground.

Yes we’re over here 9453 Lexington Court. These are the police officers who shot my husband. And he better live. He better live.

Spectrum Dance Theater’s 2016/17 season examines issues at the forefront of American consciousness, and SHOT is artistic director Donald Byrd’s take on recent police shootings, especially those of unarmed black men. The world premiere work is a cold plunge into the lives of those who must be constantly vigilant to survive, framed by the chilling monologue of one woman witnessing her husband’s murder. The words are those of Rakeyia Scott, pulled verbatim from a cell phone recording of the incident in September 2016. Scott’s words speak for themselves, but Minor’s skillful, impassioned performance tears you open. She strips the distance created by computer screens, and puts a real live body behind that fear, love and anger.

The challenge with political dance work lies in making abstract movements feel relevant to a concrete topic, but Byrd succeeds in infusing his medium with clarity and urgency. Fast, rhythmic gestures performed in unison are loaded with imagistic meaning and delivered so quickly that the choreography speaks directly to the subliminal—two fingers swiftly drawn, a strike that stops short, a gathering of the hands, a swivel of the ribcage, then two hands up. The dancers perform the punctuated rhythms toward the audience and it feels like they are speaking to us. We are humans and we need you to listen.

In other sections the choreography is constantly turning on itself—each movement changing directions or levels, undercutting the one that came before it. This turmoil and complication seems almost designed to trip up the dancers. At one point a group of men chant “stop, please, don’t shoot” while handstanding, dropping to their knees and kicking as they jump. The physicalization of this exhaustion is telling—they are literally bending over backwards to not be killed.

All of Spectrum’s dancers are incredible technicians, but the choreography is most effective when the performance transcends technique, when you forget you are watching trained dancers and instead believe these movements are simply expressions of the performers’ hearts. This sensation is especially apparent in the series of solos scattered throughout the night. Wood takes us there as he pushes the floor away, trembling, before gliding low and graceful, negotiating the relationship with gravity’s downward pull. Equally soulful is Robert Moore’s slow arch backward, Alexander Pham’s thrust skyward, Madison Oliver’s unflinching groundedness, and Fausto Rivera’s sudden release, which causes his elbows to thud into the floor.

In an abrupt interlude from the dancing, Byrd joins the cast on stage and reads off the “rules” of interacting with police that black parents now teach their children. Rules such as “calm down,” “shut up,” and “keep your hands visible” place the burden of defusing police interaction squarely on the shoulders of the teenager, but are aimed at staying alive. While I wonder if this information could have been delivered more artistically, the point comes across. Following the reading, dancers on either side of the stage begin debating conservative and liberal points of view, which descends into name-calling without resolution, displaying both the complication of the issue and the often fruitless result of shouting statistics at the other side. In contrast, the final section of dancing finds power in a kind of memorial to the victims. A dancer announces a name, which is also projected behind them, and then performs a short solo. It is a simple structure, but one that allows us to sit with each name, not as a statistic, but as a living, breathing body that exists no longer.

SHOT has a few awkward transitions, and maybe a few unnecessary high-kicks, but it more than makes up for its shortcomings because it nails something really difficult: making effective political art. It doesn’t feel preachy, over-simplified or emotionally manipulative. SHOT goes beyond making work about an issue, humanizing the victims and their communities. The medium of bodies, after all, is perhaps the most effective in generating the kinesthetic empathy that allows us to recognize the self in the other.