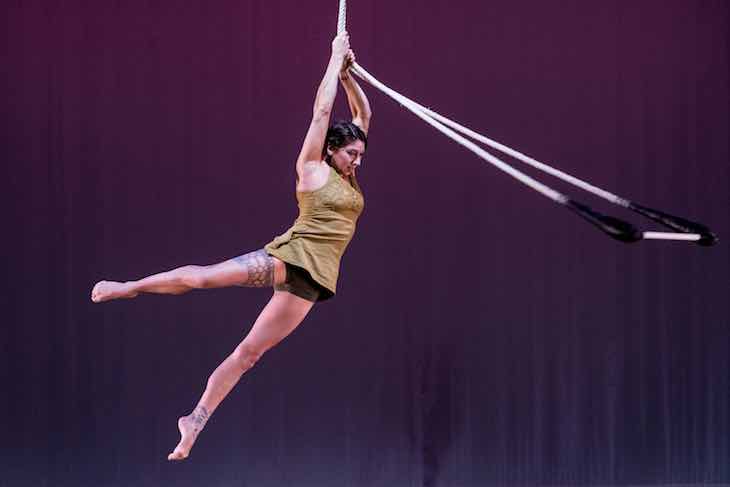 For the last decade, UW’s DXArts program has been on of the country’s leading researchers in the field of ambisonics, or 360-degree recording and playback. It’s a fascinating topic I’m still learning more about. Tonight, UW hosts Jonti Harrison, a UK-based sound designer whose far-flung found sounds and field recordings will be piped through Meany Hall “in Holographic Higher Order Ambisonic surround-sound.” Whatever that means, I wanna hear it. —Jonathan Zwickel
Meany Hall

Golden Gardens are one of Seattle’s best dark-fairytale goth bands, so it’ll be narcotic goodness hearing them play How Brave the Hunted Wolves, their 2012 debut full-length, in its entirety. Two other first-rate PNW darkwave outfits lend support. Tease your hair into spikes so pointy they impale low-flying swallows and get your spooky on, fellow creatures. —Tony Kay
Barboza

Among the more activated, inquisitive podcasts in the city is the Glow-Up, which covers cultural topics from a decidedly Seattle perspective and features guests from the local hip-hop community. Tonight hosts Casey Carter and Darryl Reese celebrate the Glow-Up‘s one-year anniversary with a live recording, where they’ll solicit questions from the audience and raffle off prizes before a dance-friendly afterparty. —Jonathan Zwickel
Sugar Hill

To mark the reception of 2017 Betty Bowen Award-winner Jono Vaughan’s exhibition at the Jake, rockstar stylist Keri Scherbring (master of melty-rainbow colored locks) has been invited to do a live color and cut on the equally inspired artist Claire Cowie. The dye spattered across the floor during this ritualized haircut will create a drawing of its own. Should be fun and strange. —Amanda Manitach
Jacob Lawrence Gallery

Ravenna Woods, the Butchers and the Builders, Cedar Teeth

When the 2010s began and Seattle was overrun with earnest neo-folkies, Ravenna Woods dove into darker waters, adding percussive storminess, angry-young-man intensity and coiled unease to their acoustic music. They remain a legit force of nature onstage, and if their new material’s as strong as last year’s Alleyways and Animals EP, this gig’ll be fantastic. —Tony Kay
Nectar Lounge

Kids come from all over to learn from established local musicians and peers and just hang in the studio at Totem Star, the nonprofit record label that provides studio time, mentorship and professional development to young recording artists. This vital incubator of talent provides an unparalleled glimpse into the near future of Seattle music. This showcase features live performances by their roster of student-artists. —Brett Hamil
Youngstown Cultural Arts Center

Historian Lauren Danner reads from her new book Crown Jewel Wilderness: Creating North Cascades National Park, an account of the creation of the park, which officially opened 50 years ago though planning began in 1892. Through the lens of the history of the North Cascades, Danner explores the mechanics of federal land management. —Sarah Galvin
Elliott Bay Book Company

I fell in love with Acrobatic Conundrum while writing about contemporary circus last year, and not only because they’re capable of astonishing physical feats, but because they use them to deliver an emotional, fun, delicate brand of storytelling. Their four-week run has two sections: The first two weekends are curated cabaret Volume 5; the second are The Fig Tree Waltzes, featuring choreography from Costa Rican choreographer Jimmy Ortiz Chinchilla. —Gemma Wilson
12th Avenue Arts

Inscape is a bustling, labyrinthine hive of artists (five floors worth) who work in nearly every medium imaginable, from video to painting to clothing design. Budget a few hours to explore 50 studios, meet the artists, get lost in installations, grab a bite from Grumpy’s food truck and scout for holiday gifts along the way. —Amanda Manitach
Inscape Arts

The Every 28 Hours Plays

An Evening of Poetry Curated by Anastacia-Renee