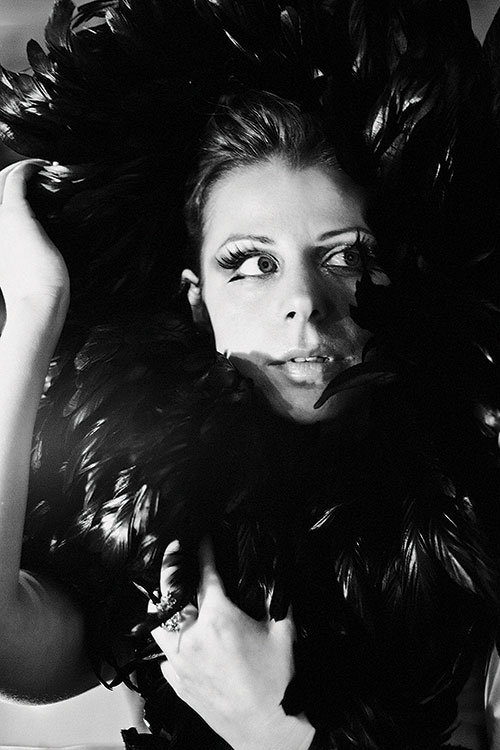 As Lady Rizo, actress, singer and comedian Amelia Zirin-Brown turns the ridiculous into the sublime.

When Lady Rizo sings, the ground cracks open under her feet. Music rises from deep in the earth, shooting up through the soles of her shoes and out through perfectly painted lips. There is no ceiling, no limit, only an open faucet of fearless, soulful, propulsive energy. Gowns and lashes and glitter: She’s an actress seducing audiences in the satin skin of a chanteuse, a tough-as-nails woman who can make you cry into your martini and then laugh so hard you spit it out.

For 10 years, Amelia Zirin-Brown has melded old-school glamour with contemporary comedy as her alter ego Lady Rizo (REE-zoh). Equal parts actress, comedian, singer and songwriter, she’s known for creating period arrangements of modern pop songs. One moment she’s shattering hearts and the next she’s exhorting her audience to “stand the fuck up: I want this to be a dance party!” Her cabaret shows erupt with the energy of a rock concert.

Zirin-Brown sang with Yo-Yo Ma on his Grammy-winning album Songs of Joy & Peace. She choreographed the music video for Moby’s “New York, New York” and performs the vocal on his hit “Pale Horses.” She recorded with comedian/singer Reggie Watts and acted with downtown theatre-makers Young Jean Lee and Taylor Mac. She did the lambada with the King of Sweden.

Comedy makes Rizo a chameleon—nothing is an act, but everything is an act. Who else could take Burt Bacharach’s mockably saccharine “Close to You” and turn it into a funky, sensual love song? Or get away with bringing Jesus on stage for a cover of Beyonce’s “Halo” or turn the stalker-y subtext in “I Will Follow Him” up to 11? Beginning this month, Seattle audiences can catch this magnetic star under the lights at high-rent dinner theatre Teatro ZinZanni in The Hot Spot.

“I was astrologically planned,” Zirin-Brown begins with a smirk, via Skype from a rehearsal studio in Memphis where she’s recording her second album. “So that gives you a clue as to the community into which I was born.” Namely, the Oregon coast, in the small town of Newport, where her parents started a theatre company which Zirin-Brown describes as a grassroots, communal-art-creation environment. “It was a great way to be raised because it was in the theatre, but also because I had so many different parents. Having all these artists around, all these people that were invested in my future—that was the extra padding I needed to have a lifetime in the arts.”

Zirin-Brown was a natural singer and started dancing at a young age—but she mainly took the opportunity to make the other girls at rehearsal laugh. “Dancers are a great audience for a comedian because they’re not trying to be louder than you.” She was determined to study acting in New York, but a bad audition ruled out Juilliard and a full ride to Cornish College of the Arts was too good to pass up. “There’s a lot of cross-disciplinary encouragement,” she says of the school, “and I was hooked on the idea of ensemble creation.”

After graduating in 1999 she landed roles at Book-It, at Seattle Shakes, in Bartlett Sher’s first production as artistic director of Intiman Theatre, Cymbeline. She was excited to be working, but each new show put New York further on hold. Two years post-college, a friend was auditioning for Princess Cruise Lines and Zirin-Brown had no shows on the horizon. She thought, If I don’t like leave right now, I’m never going to leave. So she snagged a job as a lounge singer on a cruise to Alaska that she describes as “hell on water.” But the gig got her out of town and gave her two important things: enough money to move to New York and her future (now ex) husband Andres Rizo, a Colombian in Alaska on a work exchange. After moving back to Oregon to sort out his visa paperwork, the two bought a Ford Explorer and headed for the East Coast.

In New York, Zirin-Brown had no interest in starting back at the bottom. “I wanted people to offer me jobs, which was this sort of insane belief that I have something to offer, beyond any sort of begging,” she says. In 2005 she and Amber Star Merkens, a sister from her Newport tribe and a Juilliard-trained dancer with Mark Morris Dance Group, put together a show: Lady Rizo and the Assettes. Lady Rizo was the singer and emcee, the Assettes her bevy of beauties. They performed at a then-unknown spot in Long Island City, Queens, called The Creek and The Cave. (It had a dusty, fallow stage they convinced the then-owners to let them use; it’s since become a New York comedy mecca.) Their first weekend sold out; Mark Morris and Moby were both in the audience. From there, she says, things took off.

“I’m as much a comedian and storyteller as I am a musician, and I think it excited people that I’m not limiting my identity. That can pull different artists from a lot of different directions.”

Lady Rizo was modeled on “divas of yesteryear” like Peggy Lee, Edith Piaf and Nina Simone, Zirin-Brown says, but she was also shaped by the namesake husband who was her manager for many years. “He’s a very good Colombian man who wanted to treat his wife like a queen,” she says of Andres Rizo, “and that helped me own this character that believes everyone should treat her like a queen.” That brash exterior opened the door to all her creative choices. “You don’t have the humility that comes with humanity because she’s larger than life,” she says. “It’s really a gift for comedy to have an alter ego that is unapologetic.”

In 2009, Lady Rizo began a three-year residency at New York stage Joe’s Pub. A wildly successful run at the Edinburgh Fringe Festival in 2012 opened up the UK and Australian touring circuits. For the last two years she’s lived mostly on the road, popping back to New York to perform at hot spots like Soho House New York, Joe’s Pub and A-list supper club the Darby. (That’s where Christopher O’Neill, now the husband of Sweden’s Princess Madeleine, became a fan—hence the invite to perform at the Swedish royal wedding.)

The older she gets, the more personal her work becomes and the more Zirin-Brown finds herself overlapping with her stage persona. Much of her most recent show, which she toured internationally last year, was about remaining Lady Rizo even though she isn’t Mrs. Rizo anymore. “I still think he’s an incredible person; life just happens,” she says of her ex. “It’s almost nice to carry the name on—I spent 12 years with this man and look what I have to show for it. We didn’t have a child together but we have this.”

A-list experimental playwright and director Young Jean Lee, a big fan of Rizo’s stage shows, invited her to help create and star in Lee’s Untitled Feminist Show, which opened to a New York Times rave in 2012 and continues to tour. (Zirin-Brown heads to Calgary to perform the show between her Memphis recording dates and the ZinZanni run.) Projects like these allow her to scratch her acting itch in her own skin.

Tobias Larsson, a longtime ZinZanni performer, director and choreographer, with performance credits at the Lido de Paris and the Moulin Rouge, knows top-tier cabaret talent when he sees it, and he saw it at Joe’s Pub last summer with ZinZanni’s casting director. “Halfway through the show I leaned over and said, ‘If you can get her, book her,’” Larsson says. “She was perfect.”

In The Hot Spot, Zirin-Brown will make one hell of an entrance. “For this show, we’re thinking that the tent was built over an ancient wishing well,” he continues, “and inside the tent will be a huge clamshell fountain where Lady Rizo will appear as the culmination of every wish personified.” The high-glitz, audience-centric show seems an ideal fit for Rizo’s in-your-face identity, as does the far-reaching musical selection. She’ll sing “I Only Have Eyes for You,” “Sweet Dreams,” and an original song she wrote with ZinZanni music director Hans Tueber, to name a few.

“I kind of love being a star,” she laughs. “I love being the main attraction, I love having fans and I love creating to inspire. A lot of my work is affirmative in the grandest sense of the word: affirming life, the beauty, the joy, the sadness, the rage—being totally human in an amplified way on stage, and allowing an entire audience to feel that through me.”