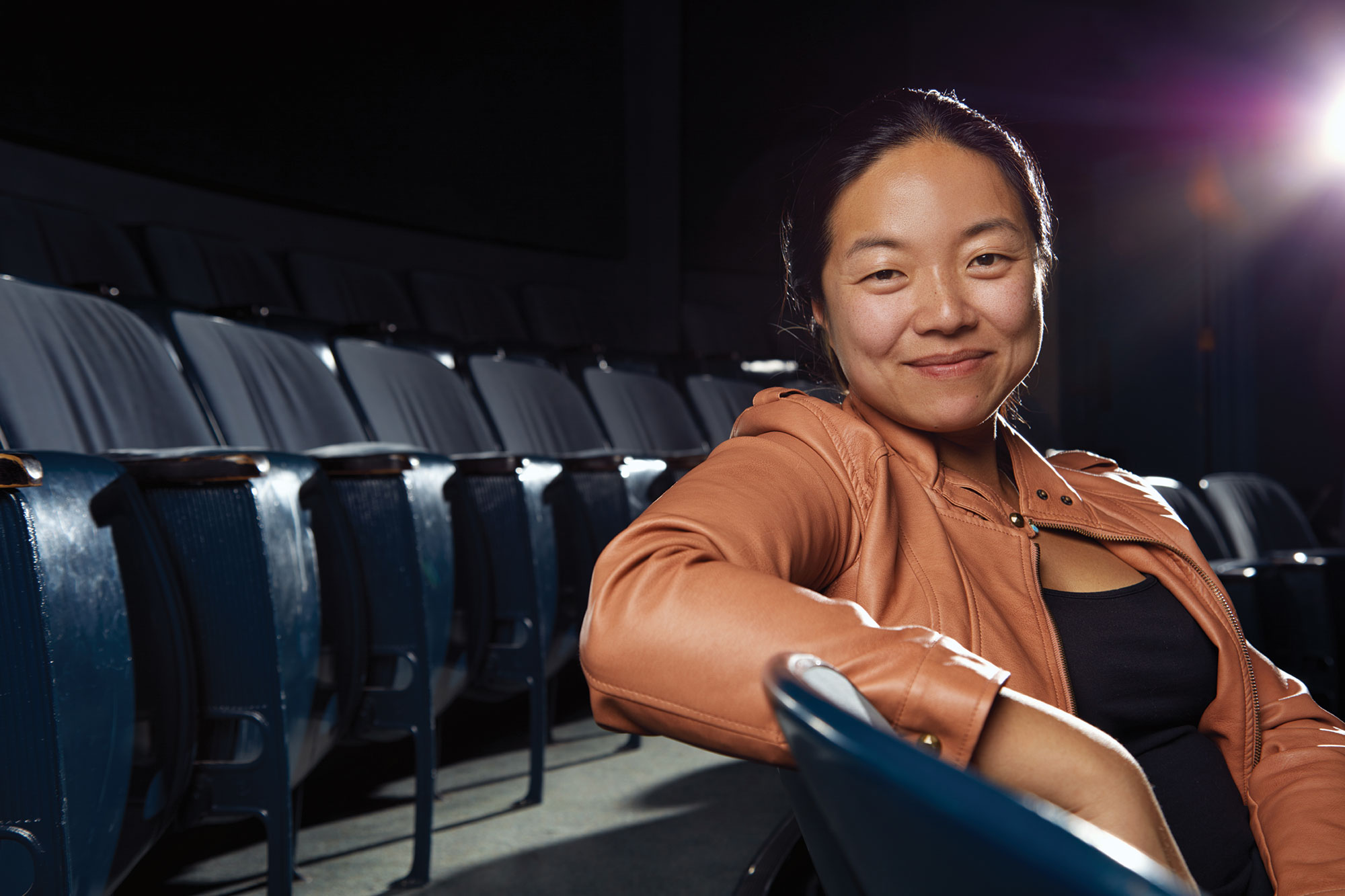 Slowly pacing a matte grey floor covered in spike tape,  Desdemona Chiang directs a question to her rehearsal room: “What the fuck is this moment about?”

Laughter ruffles from the cast and creative team members of The Winter’s Tale. Chiang is staging the second scene of the tricky, split-personality Shakespeare play, and her casual, inquisitive demeanor belies her deep knowledge of the material.

One of Chiang’s strengths as a director is her trust in everyone she works with. The scene in her rehearsal, lit by unusually hot April sunlight, is intensely collaborative. “Feel free to challenge me, always,” she tells the actors, and they do, piping up with ideas and impulses. It’s a relaxed room, full of conversation, and when Chiang shifts gears back into the scene itself, the resulting performances feel nuanced and organic—a hallmark of her work.

After rehearsal, Chiang sits in the center of a nearby Oregon Shakespeare Festival stage and the theatre fizzes as she describes her Winter’s Tale—set first in old-world China and then new-world America, an imagined utopia of multicultural immigrants and Manifest Destiny. Her speech is vulnerable, personal, magnified by the energy of a room full of Asian Pacific American theatre makers.

“For me this play is profoundly spiritual,” she says. “To feel healed, to feel restored, to feel complete and whole, not in that happily-ever-after way, but in a way that brings us some degree of peace in a world of suffering. These are things that all people seek, and I think that is why we love this play so much.”

At 36, Chiang, a 2009 graduate of the University of Washington’s MFA in Directing program, is carving out a national directing career. She helmed the simple, crystalline Constellations at Seattle Rep earlier this year, is the co-founder of local theatre company Azeotrope, and now she’s directing one of OSF’s anchor shows of the summer, which opens at the venerable Ashland company’s outdoor Allen Elizabethan Theatre on June 2.

Chiang is back in Ashland after a whirlwind trip to New York to accept a Vilcek Prize for Creative Promise, awarded each year to emerging artists and biomedical scientists from immigrant backgrounds (she moved from Taiwan to LA at age three). This is her fourth season working at OSF and first time directing a mainstage show for the company; she’s been a dramaturg and assistant director but this leap is a milestone for any emerging director.

“The Winter’s Tale is ultimately about restoring what was lost and restoring faith in the impossible,” she tells the crowd. “It’s a second chance at life when we think we’ve lost it all.”

Chiang came to theatre relatively late. She tried it out as an extracurricular activity/resume booster in high school, but in college pursued her aptitude for science toward a biology degree at UC Berkeley, with an eye on medical school. Then a classmate suggested Introduction to Acting as the easiest way to fulfill a freshman year arts requirement. “You just stand in a circle and clap and play charades,” she remembers her friend telling her.

Which was true, she says, but it was fun, and Chiang came away from the class with an unexpected sense of connection and intimacy. “When you start playing you suddenly become vulnerable in a way that I wasn’t in science,” she says. Next term she signed up for a scene study class. By senior year, she had enough credits to graduate with a dual degree in theatre and biology.

Out of college, living in the Bay Area in the early 2000s, Chiang abandoned med school, instead spending time in the tech sector—and hating it. Remembering how much connection she’d felt in the theatre world, she auditioned for a production of Macbeth at Berkeley’s Impact Theatre. She was cast as Lady Macduff, had two lines and one awesome fight scene and asked artistic director Melissa Hillman if she could assistant direct on a show. The following season, she assisted Hillman on Othello.

After that Hillman offered Chiang her first professional directing project: Sheila Callaghan’s Crumble (Lay Me Down, Justin Timberlake), a gleefully macabre, semi-absurdist tale of grief. “So scary!” Chiang says. “But amazing, and I owe so much to her, because I don’t know how else I would have gotten a professional gig so soon.”

Equally important: taking a part-time job at Theatre Bay Area (an organization akin to Theatre Puget Sound in the Seattle area) and meeting people who actually made their living in theatre. Determined to do the same, Chiang applied to UW’s MFA Directing program.

“I appreciated that she had clear vision and was good at putting words to what she imagined, which is critical for a director,” says Valerie Curtis-Newton, the head of UW’s program. “[Directors] have to find a way to translate the things that are in our head into something tangible that other people can hook into—and we saw that in her. She has a very strong sense of what works and what doesn’t and she’s no-nonsense about telling you that.”

Chiang’s direction is detailed but free from frippery; you won’t find her shows drowning in design elements at the expense of the emotional connections on stage. Her skeptical mind informs everything she does. “A lot of my work is based on doubt,” she says. “Vision is awesome; doubt is useful. Science is all about disproving—an idea is great until someone shows me why it’s not a great idea.”

After graduation, Chiang and a classmate, actor Richard Nguyen Sloniker, formed Azeotrope. Both wanted room to pursue their own careers, so they decided the company would work on a project-by-project basis—no fundraising, no season planning, nothing too committal. “I was not interested in paying child support on a theatre baby,” Chiang jokes.

“We wanted to focus on marginalized or obscure stories,” Sloniker says, “things that aren’t totally mainstream but should be, things that we all experience but don’t like to talk about.” In 2010, they produced Adam Rapp’s brutal Red Light Winter at Theatre Off Jackson. But it was Jesus Hopped the ‘A’ Train, Stephen Adly Guirgis’ dark comedy set on Rikers Island, that first garnered them serious local attention in 2012 for its dazzling performances and fearless approach to a difficult subject.

Azeotrope’s most recent show, Sound, was a world-premiere play by Don Nguyen, a bilingual piece in English and American Sign Language, cast with hearing and hearing-impaired actors. It’s the show Chiang is proudest of so far. “The [rehearsal] room for Sound was so humbling and so generous,” she says. “I would never find myself in a room with most of those folks if not for that show. And if theatre is about building bridges and making new communities, then that was a prime example in my work.”

As Chiang and Sloniker crystallized Azeotrope’s mission—“to create a space where audiences confront the marginalized and obscured, bringing visibility to the invisible”—Sloniker pushed her to embrace her role as a woman of color working in theatre.

“He said, ‘I know you don’t love doing the Asian work, I know you want to be more mainstream, but you have to come out as Asian,’” Chiang says. “And I said, I don’t have to come out as Asian, I am Asian!” Sloniker convinced her that talking about her point of view was crucial, no matter how much she wanted to just do Eurocentric work like Shakespeare, Williams and Miller. “He was like, ‘No dude, there are young people coming out of school who are going to look to you as someone whose career they could model. And until you come out as an activist, they are going to think that you’re not part of their legacy.’”

“Whether or not I like it and whether or not I choose it, I have a responsibility as an Asian American director working at the [regional] level,” she says. “That you have someone who looks like me at this theatre means something. Because I didn’t have that.”

After Winter’s Tale opens in Ashland, Chiang will return to Seattle to direct A Tale for the Time Being, the season opener at Book-It Repertory Theatre, then it’s on to PlayMakers Repertory Company in Chapel Hill, N.C., for The Crucible. Chiang’s 2017 is up in the air; she may be back to teach directing at Cornish, as she has for a few years; she may be back in the Bay Area, where she works frequently. Azeotrope would love to present its first comedy. For now, Chiang is keeping her feelers out for work around the country. Seattle can offer only so much opportunity.

“I have to do more work on me before I can do more work for others,” she says. “I want to nose around, see other models before I start creating infrastructure. How is Baltimore doing it? How is LA doing it? Freelancing gives me the chance to do that.”

The untethered lifestyle is both liberating and maddening, but Chiang is learning to live with uncertainty. Five years ago, she got divorced, and after slogging through the emotional muck of parting ways with a partner of 12 years, not much gets to her.

“It’s like crossing a river when you only have three stones ahead of you at any moment. All I can see is where I’ve been. And I have no idea where I’m going.”