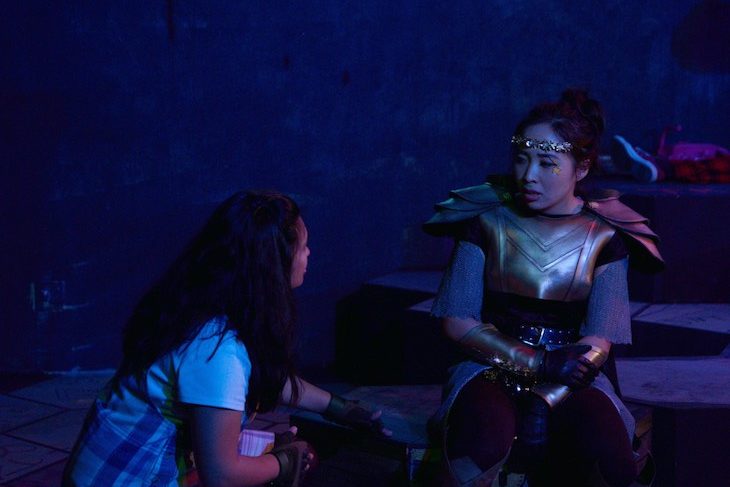 There’s an aggressive nostalgia-baiting streak in Theater Schmeater’s production of Qui Nguyen’s She Kills Monsters, which can feel like a ’90s-kids-meme come to life with its romanticizing of the era. Needle drops range from Beck to Paula Cole to the Macarena; video game sound effects from the Mario and Final Fantasy franchises are liberally applied; the Friends episode where Joey puts on all of Chandler’s clothes plays out at length in the background of a scene.

Set in 1995 Ohio, the play occurs in a largely pre-internet world (one character gushes about his 56k modem) before irony became pop culture’s primary dialect, and Nguyen’s open-armed appreciation of the era’s indelible icons and its detritus fits right in. Schmeater’s production, directed by Butch Alice, displays that same kind of affection for the play and the cadre of small-town geeks that inhabit it—a warmth that goes a long way toward neutralizing the show’s deficiencies.

The protagonist of She Kills Monsters, introduced dancing to Ace of Base, is decidedly not a geek. Agnes (Annelih Hamilton) doesn’t know what to make of her little sister, Tilly (Ai Nguyen), a “girl-nerd, the most uncommon form of nerd in the world,” who loves playing Dungeons & Dragons and goofing around with spells and magic. When Tilly dies in a car wreck, Agnes feels compelled to try to understand her dead sister through a D&D session she left behind.

Yes, this is a play about grief in addition to being a nostalgia trip, and the possibility of a lethally maudlin combination of the two always feels imminent. Nguyen is a sharp writer though, capable of puncturing a scene’s ballooning earnestness just in time.

“This is a D&D adventure, not therapy,” she scoffs, rebuffing Agnes’ attempt at a hug.

Eh, it’s both. But the adventuring does take precedence, in a series of chaotic fights where Agnes, Tilly and their party (Maddy Noonan’s demon queen, Alaji Marie’s dark elf, Peter Sakowicz’s lord of the underworld) battle monsters and shapeshifters and evil cheerleaders. The gameplay will probably be more meaningful to anyone who’s played D&D (my experience is limited to watching that one Freaks & Geeks episode) but there’s an enervating repetitiveness to the fighting that will be familiar to anyone who’s watched someone else play video games for hours on end.

Director Butch Alice (aka Brendan Mack) thrives on throwing lots of shit at the wall and seeing what sticks, which can help renew the flagging energy of endless boss battles. The charmingly DIY creature design, led by Dan Garlington, involves fish-like monsters with huge googly eyes, giant Furbys, a gelatinous green blob and a toothy sphere with a very poppable balloon for an eyeball. Long red strips of fabric make for fabulous entrails. Bill Johns’ hexagonal scenic design brings a game board into three dimensions.

Through the gameplay, Agnes grows to understand her sister better and discovers some secrets she probably should’ve recognized while she was still alive. Her capacity for empathy expands as she meets the real-life analogs to Tilly’s D&D characters.

Nguyen assembles all the necessary pieces for a heartwarming climax, but Agnes remains a cipher, defined primarily as not-a-geek and not much more, and Hamilton’s opaque performance doesn’t add much depth. Catharsis is more implied than experienced. What is heartening: Though nerd culture’s most prominent touchstones are omnipresent corporatized blockbusters and toxic online campaigns of exclusion, She Kills Monsters conjures a world where it fosters genuine community.

She Kills Monsters runs through Aug. 18 at Theater Schmeater.