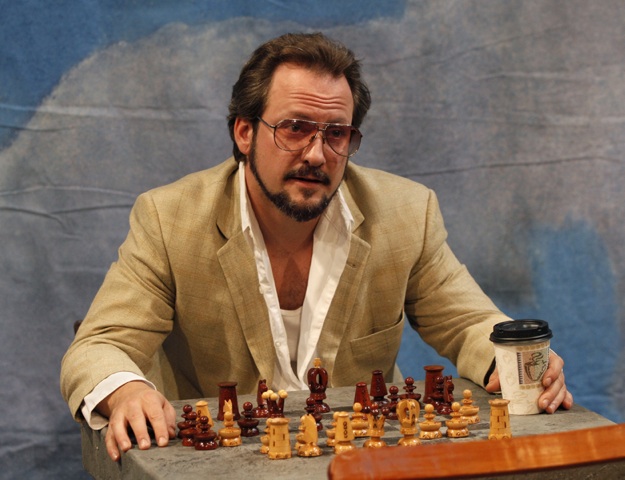 At some point every relationship flairs into brutal and explosive combat. But when a romantic coupling starts off with contention and descends into an insane and violent territorial war, it leaves you wondering, ‘What the hell is wrong with these people?’ Playwright John Patrick Shanley doesn’t pretend to answer this question in his highly allegorical play, Dirty Story, but pulls out all the stops, presenting politics through the trope of relationship. Dirty Story opened Intiman’s summer festival, and Saturday’s midday performance (non-opening night) was staged with thoughtful subtlety, the actors bringing just the right amount of panache to the stage, while infusing Shanley’s characters with enough humanity to pull them from the territory of stereotypical jokes.

Dirty Story follows Brutus (the ultra-talented Shawn Law), an egotistical writer lost in his own self-absorbed world, and Wanda (Carol Roscoe), an admiring graduate student who sends him her manuscript. When Brutus invites Wanda to his Meat District loft, their scholarly bantering builds until Wanda finds herself helpless and desperate at the hands of a diabolical, dominating man. In Act II we meet cowboy Frank (the swaggering Quinn Franzen) and his British sidekick Watson (Broadway veteran Allen Fitzpatrick). Wanda recruits them to help solve her and Brutus’ vitriolic dispute over the apartment they now share, and all interactions devolve into a chaotic fight for territory, both parties convinced that they have rightful ownership over the space.

Under the careful direction of Valerie Curtis-Newton, the characters move around the stage completely unaware of their allegorical states, emulating deep emotional response—nostalgia, joy, lust—without falling into verbal or physical hyperbole. Sure, there are purposefully silly or overdone moments, such as Franzen and Fitzpatrick breaking into a cabaret-style performance of “You Light Up My Life,” but much of the intentional humor is lined with seriously relevant issues. You laugh when Wanda performs a violating, full-body search on Brutus when he asks to use the bathroom (it’s located on her side of the apartment), only to cringe uncomfortably when thinking about real-life equivalents.

Watching Shawn Law spiral from asshole author to abusive maniac, and then the physical embodiment of Palestinian rage is both thrilling and a bit scary. Law seems to bring everything he has to Brutus, executing a completely believable character arc throughout Act I, and captivating an almost empathetic ire in Act II. He often exposes himself through physical action-his voice and tone is calm and soothing, but he’s pacing around the loft, balling his fists or moving things around. Sometimes it’s more subtle-a clench of the jaw or movement of the arm. Roscoe plays the slightly embarrassed and admiring graduate student with wide-eyed, stuttering believability, and after her initial domination by Brutus she explodes into a militant, gun-wielding Jewish defense force. She is fighting back as a result her humiliation, her subjugation at the hands of Brutus. And who provides the guns? The American cowboy, of course. The play was written just a few years after 9/11… you can see where this is going.

The production is the only one to be staged in Intiman’s studio theatre, a small space where the audience is intimately close to the performers. Jennifer Zeyl works her magic, using a curtain to hide a large NY loft space, first sparsely furnished when only Brutus lives there, then stuffed with ornate decorations and divided with a line of plants once Wanda moves in; a visual demonstration of her fulfilled need to find and inhabit a home of her own after rootless shifting around the city.

Written in 2003, Shanley’s subject matter isn’t as fresh as it was nine years ago—we have become accustomed to news stations constantly hammering us with world politics—however it is no less relevant. Beneath the allegorical storyline lies a deeper issue. This is a play about identity. Who are we really and how did we become that person? Who do we opt to be around others, and what do we qualify as our “real” selves? In a society where we are encouraged to be and do anything we want, choosing an identity can be a terrifying struggle. As with the other issues in the play, Shanley doesn’t push answers or personal opinions on the audience; he just lays it out and lets it ride.

Pictured above: Shawn Law as Brutus in Dirty Story. Photo by Chris Bennion.