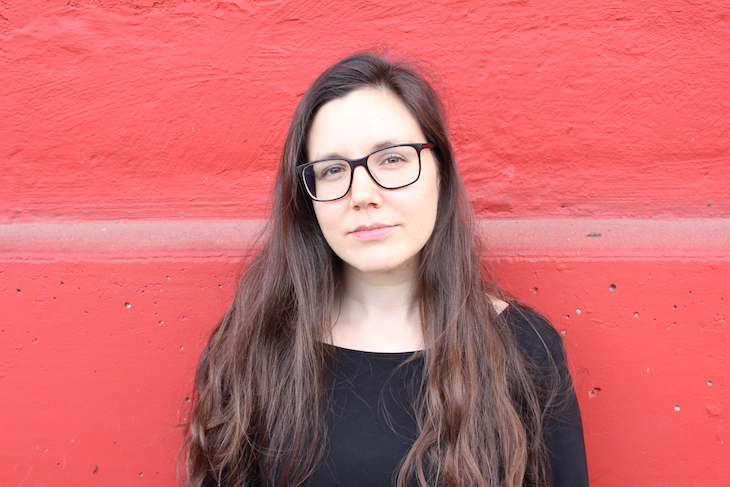 Before I knew I was a shark, I knew I was hungry. I was in first grade when I began asking God to bring me a body to circle and gnash.

In my favorite old story, a girl devours everyone who loves her before she turns into a shark. I try to tell this story to everyone I know, but I retain so little of it. I only recall that she kills her husband’s women, she kills his children, she eats her baby, she kills her husband. She goes to the ocean and there, she becomes a shark, a dangerous being.

This story is about me. The old stories are about excrement and dreams and learning to copulate because they are meant to teach us how to live. I asked my tribe’s spiritual leader about the story, and he told me I needed to do my own work to figure out the lesson—this is the point of a story. If I knew the lesson, I could explain the whole universe at the bottom of my throat.

Sharks don’t hunger for human flesh. Sharks eat smaller fish, seals, sea lions and other marine mammals. Their attacks on humans are sorry bumblings of mistaken identity: a dangling leg might look like a lazy fish, a wet-suited surfer like a sea lion. Once the shark’s teeth puncture the soft barrier between organs and sea, the blood loosens into water. Human innards don’t taste right to sharks, so they swim away, maiming but ultimately declining to consume human bodies.

Sharks hunger for fat. Blubber is rich enough in energy to sustain swimming across long distances and into cold waters. Seals are worth the effort of engorgement; surfers are not. All of shark life is a long loop of swimming from kill to kill, from violent sharkfuck to birthing new sharks with ready jaws, feeling and knowing the water with more senses than any other predator. A shark smells the signs of death before it’s even made them.

Before I knew I was hungry, I knew I was empty. I howled at my parents to buy me Barbie dolls, to tell me every story, to sing me the song about the dragon and then the one about the dead soldiers and flowers and then the one about all the favorite things. I wanted to dump the Lucky Charms on the floor so that I could pick out the marshmallows, throw out the rest, and then throw out the marshmallows, too, after admiring my pastel baubles.

While sharks don’t seek out humans, they have, in rare cases, been known to eat them. At a Cape Town beach in January 2010, according to the Daily Mail, a great white circled swimmer Lloyd Skinner, struck him and pulled him underwater. An onlooker said, “You could see its whole jaw wrap around the thing—which turned out to be a person.” Skinner fought to the surface, but the shark struck him into the air and then pulled him back into the bloody water. Another onlooker said, “It had the man’s body in its mouth and his arm was in the air. Then the sea was full of blood.” Skinner wasn’t seen again. A coastguard spokesman said, “We think the shark took everything.”

I know that when I’m dating, I’m supposed to be myself, but after I decide to circle a man, I try not to let on that I want to eat his jaw. By this I mean that I bring my lips to his face with a desire that has no endpoint. I’ll take him for everything he has: I am a dangerous being. My proclivity for the worst thing replicates in each cell. I was born part shark, part show cat, part crow. I beg for scraps, preen for love, go for blood when the feed comes in. People say sharks are wicked people-eaters when we don’t understand their appetites, but we feed the same, seeking the fat, living kill to kill. We are the patterns born from our appetites. I search for the mercy that will make me stop hunting.

Elissa Washuta is a member of the Cowlitz Indian Tribe and a writer of personal essays and memoir.