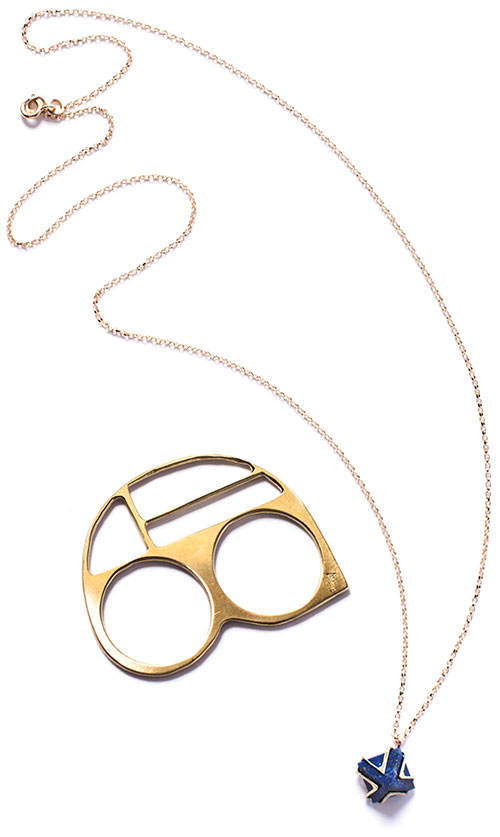 A piece of jewelry by Faris Du Graf is easy to identify: simple but unusual shapes fashioned from sheets of brass, colorful but subtle beadwork, a modern and edgy sense of proportion. Every necklace, bracelet and pair of earrings strikes a balance between elegance and surprise.

Du Graf, a petite brunette, was born and raised in Seattle and studied urban planning and economics at the University of Washington. After graduating in 2007, she moved to the Bay Area for a job at a San Francisco architecture firm, where she worked on sustainability and energy-efficiency studies as well as marketing. “I never thought I could be a designer, that design could be a viable career path,” she says.

Among the various crafts she tried, Du Graf gravitated toward jewelry design and metalwork. “You can’t make shoes in your basement, right?” she laughs. “And if you’re making bags, it’s better to outsource the production. But I wanted to be hands-on. So pursuing jewelry was really a pragmatic decision.”

For years she worked as a metalsmith, never sharing her creations with the public. Eventually her sisters and mother started wearing her pieces, which revealed a clear demand for her work. “A big sign was when somebody bought one of my necklaces off my sister’s neck in New York for $350,” Du Graf says.

That was two years ago. Soon after, a showroom based in New York and LA called saying they wanted to represent her and take her work to a trade show in Paris. The Frye Museum Shop’s buyer wanted to sell her stuff. By February 2013, Du Graf had quit her day job to pursue jewelry full-time—”a big leap of faith,” she says. Today her work is sold internationally.

Last year, Du Graf’s summer sojourn in Seattle turned into a permanent return. Her studio is in Interbay, beneath the showroom where her parents run a furniture business. It has beautiful west-facing windows and dozens of little workspaces for cutting, filing, carving and soldering metal. Pieces of her collections are laid out on every surface. In one corner are her brass negatives—huge sheets of metal full of holes in the shapes of Du Graf’s pieces. A few mobiles hang from the ceiling, her iconic geometric shapes dangling in the light.

These days Du Graf works with gold, silver and stone-setting, but brass and beading remain her primary materials. “When you’re working with brass you can be more creative because you don’t have that material limitation,” she says. “You can mess up. And maybe that mess-up turns into something beautiful.”

Though she’s constantly teaching herself new techniques—like a hinge she invented—and experimenting with different materials, Du Graf’s overall aesthetic has stayed consistent since she first started making jewelry. She cites Calder and Noguchi as major inspirations, as well as a love of 20th-Century modern art in general. “The pared-down nature of it is beautiful to me,” she says. “Part of me loves European abstraction, like Bauhaus-era, and part of me loves Japanese minimalism.” Those influences emerge in her balance of shapes and space. As for the urban aspect of her work? “Part of me wants to be a B-girl,” she laughs. “Because I don’t have an extensive fine arts education, I base all my stuff off instinct.”