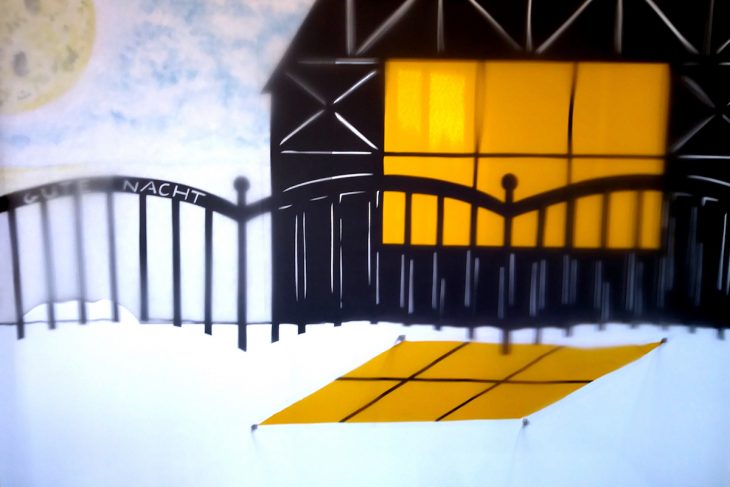 Schubert’s song cycle “Die Winterreise” is rarely performed live. Schubert very possibly never intended it to be sung as an entity: He composed the 24 songs over a vocal range almost too wide for a single voice. Seattleites have the opportunity to hear it this weekend in Trinity Episcopal Church’s Parish Hall, when Paper Puppet Opera presents it in a rather unexpected format, one which simplifies appreciation of these 75 dark minutes of voice and piano.

Written about 1823, the poems of the cycle are by Wilhelm Müller, a contemporary of Schubert’s who may have been unknown to him. On the surface, the tale is about a man despairing after his rejection by a lover. His inner anguish is mirrored by the bleak winter landscape in which he wanders. An underlying layer may be one of political discontent, in that the protagonist feels lost, that no one lives in the world he is experiencing; life in the repressive 1820s, in which poet and composer lived, created that same feeling in young revolutionary minds like theirs. And Schubert’s work holds yet another layer: his realization that he was terminally ill and facing a horrible end by dementia and paralysis (he composed the music in 1827, the year before he died). “Die Winterreise” is a masterpiece of art song, into which he poured all he was dealing with.

Juliana Brandon is the moving force behind Paper Puppet Opera and this production of “Winterreise.” The art historian, singer, opera clown, writer, artist, inventor and puppet designer began some years ago with the idea of presenting rarely-heard opera and classical vocal music in a surreal or abstract way of doing it. Her shadow puppet productions of Mozart’s opera fragment “The Goose of Cairo” and Gluck’s “The Isle of Merlin” succeeded, but “Die Winterreise” proved more difficult to illustrate. How do you come up with shadow puppets to describe a wilderness of the soul in 24 different segments?

“This one is really abstract, the landscape of the heart,” she says.

Brandon found that meditating on the songs helped, and the more she meditated the more she found the visual ways she could get inside the protagonist’s mind. She herself had faced rejection more than once.

The results are surprising. While the bleakness of the inner and outer environment is always there, color appears as accent, and birds, beasts, trees, flowers, even a cockroach appear in her puppet imagery. Brandon created 272 paper puppets, plus shadow scenery of houses, graves, roads and rivers. Three other puppeteers help with the show, and the songs will be shown as supertitles.

Müller eschewed romanticism, then in full flower, for unpretentious words and format. Lines and verses are short. He creates the essence of his thought and Schubert does the same. While the music for each song is different, expressive rather than gloomy, it has a spareness to it, with beauty in structure rather than embroidery. Brandon has followed with her visual effects, where less is more. “I was running with that idea of sparseness and keeping some lines blurry on purpose, out of focus as in a dream world,” she says.

No matter how compelling the poetry, how illustrative the puppetry, the core of this song cycle is the music. Brandon chose David Hoffman as singer and Peter Nelson-King as the pianist.

Hoffman, cantor and baritone soloist at St. James Cathedral for some years and a frequent guest with other highly regarded Seattle choirs, is an excellent choice for “Winterreise.” His voice has resonance, beauty and stamina—no small thing with this long solo work—and Hoffman has himself experienced the rejection he sings about. “I was 21,” he says. ‘It took me eight years to get over it.” Brandon concurs. “You get over the person,” she says, “but not the rejection.” Some of the songs have been transposed to make them accessible to Hoffman’s voice.

He and Nelson-King have very different musical affinities. The latter’s interests are in contemporary, abstract music which pushes boundaries, and Schubert has not been a favorite. “Winterreise” grew on him as he worked on it. “You can’t really appreciate it until you are in the middle of it,” Nelson-King says.

He adds that the music was written for a very different kind of piano, which was in a ferment of development at the time of composition. It didn’t have the modern piano’s resonance or reverberation, nor the weight of sound. With this performance, Nelson-King aims to approximate the dryer, sparer sound of that earlier instrument, which suits the meaning of the text admirably.