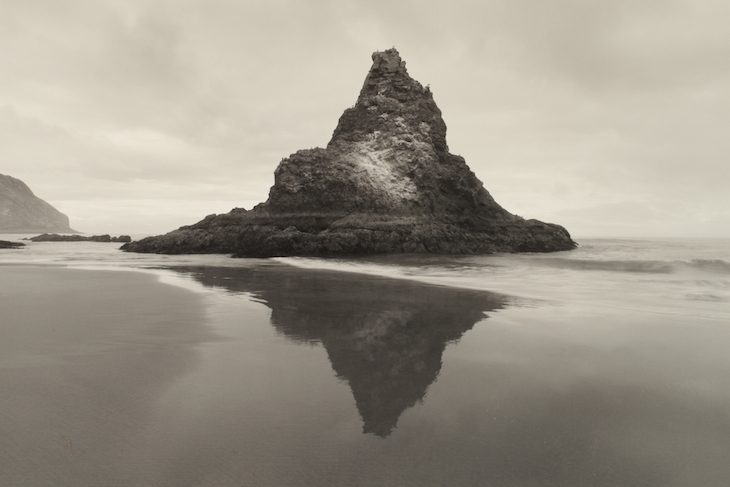 Terry Toedtemeier was still a kid when he made a discovery that changed his life. It was simple: Take a rock. Put it under another rock. Hit that rock with another, bigger rock. And voilà—its dull armor cracked to reveal a glittering heart of quartz.

Toedtemeier later reminisced in Portland Monthly, “I look at this, I look up at the sky, and I remember thinking, What is this all about?” The inner configurations of geological formations kept Toedtemeier, photographer and photography curator at the Portland Art Museum, captivated until his sudden death in 2008 at 62 years old.

A touching tribute and posthumous retrospective of Toedtemeier’s landscape photography at Tacoma Art Museum, on view now through Feb. 17, 2019, traces his lifelong fascination with geologic landforms and formations. The black-and-white photos of Sun, Shadows, Stone. The Photography of Terry Toedtemeier bear witness to a life of wandering through sea caves at the Oregon coast, Owyhee Canyonlands, lakebeds of Eastern Oregon and the Columbia River Gorge, places Toedtemeier intimately knew and loved.

Two wonderfully symbiotic photos, hung side by side on dark-blue walls, evince Toedtemeier’s lifelong love with one type of rock in particular: basalt. The gelatin silver prints were taken in 2001, likely on the same trip to Oceanside, Oregon. In one, water licks at the foothills of a pyramid-shaped rock of dark and rough bulbous basalt. A white slice of (presumably) salt illuminates its core. The second rock would be shaped like a triangle too, if not for an archway cutting through its dark mass.

Toedtemeier taught himself how to photograph as a teenager and studied geography at Oregon State University. During a summer course in field geology in Oregon in the late 1960s, Toedtemeier connected the dots. Traversing age-old rock formations on foot with just a pencil and his camera, he found himself at home.

It took him another decade to arrive at landscape photography. Before then he mainly shot dryly funny, black-and-white infrared snapshots of family, friends, strangers and strange scenes found in Portland: a cat hanging from a chair, two men leaving a bar. At the Tacoma Art Museum, these early photos are hung in a room within the exhibition room, slightly separated from the rest of his work.

In the room, we also witness Toedtemeier’s first attempts at nature photography, shot out of the car window, quickly but neatly, with a handheld camera. The resulting scenes are sparse, empty and vast, as if he finally realized that humans and cities were distractions from what he really wanted to do: comprehend the land.

Later, armed with a large-format camera, Toedtemeier ventured deeper into Oregon and Washington and his photos started to change. A literal and figurative crossroads is “Soliton In Shallow Water Waves, Manzanita-Neahkahnie, Oregon,” from 1978, a famous early photo. Two waves in shallow water intersect diagonally from opposing compass points. It’s photographic evidence of a fortuitous natural occurrence, not uncommon but exuding mystery.

Though Toedtemeier would dedicate himself later to rocks more than water, the photo made him famous and appeared in numerous books. He cemented his reputation in the mid-‘80s as curator of photography at the Portland Art Museum, where he stayed on until his death. Yet Toedtemeier often said that he felt more comfortable among the ranchers and land managers of the Oregon wilderness than among the gatekeepers of the art world. Perhaps, like a true romantic, he found nature more real than anywhere else. A “stone-age reality,” he called it.

Many romantics yearn(ed) for a time when man hadn’t yet altered nature’s beauty, its wildness; not Toedtemeier. He registered the traces of human life on the landscape: railroads, fences, a power plant, farms, powerlines. Toedtemeier’s photography was not just a stratigraphy of earth, it was also one of life. Humans, whether they were in the picture or not, added another layer of history, one that’s unbearably light. Impossibly grand swirling rocks, dark mass, or a tiny tree gasping for air between giant boulders all tell us that the traces of what came before run deeper.

Toedtemeier’s lifelong obsession with basalt perhaps best exemplifies this history: millions of years ago, it ran as liquid lava across the earth. The hardened, bumpy rocks today are only a suggestion of a time that far, far predates us. That’s a romantic idea, sure, but how could one not be in awe of the eons and feel small, a particle in something bigger?

“That the land is beautiful is the strongest clue I have towards a greater sense of unity,” Toedtemeier wrote in a letter in 1998.

Unity is not often the defining relationship between photographer and subject. Terms like “take a photo” and “capture an image” are about making the subject one’s own. Tame the incomprehensible wildness, defy your own smallness. Toedtemeier seemed to lack these inclinations.

“Through his work, Toedtemeier insists that the land is not significant because of what we can take from it or use it for,” wrote John Weber, a colleague at the Portland Art Museum, in a catalogue of a 1986 Toedtemeier solo show. “Rather the land, like our understanding and treatment of it, is crucial because we are ultimately and inescapably part of nature.”

Humanity’s interactions with nature typically give the impression of being extractional or transactional. Toedtemeier’s tendency toward integration suggests a bigger picture.

Sun, Shadows, Stone: The Photography of Terry Toedtemeier runs through Feb. 17, 2019 at the Tacoma Art Museum.