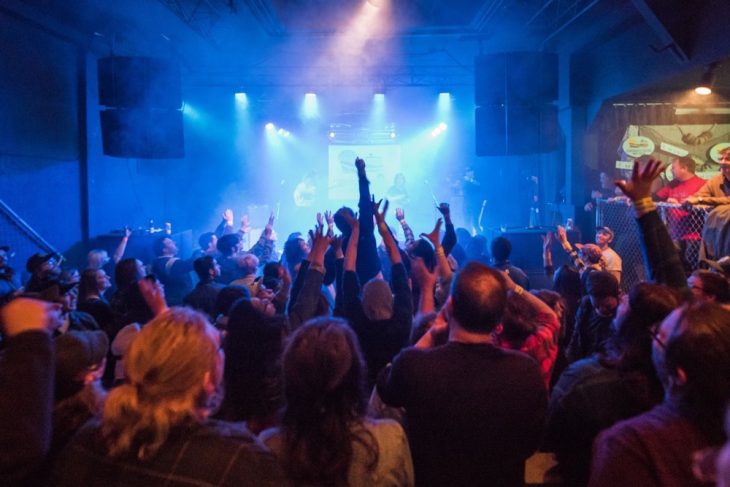 Geeks may be running the Earth, but there’s still precious little truly adult animation out there. Director Ali Soozandeh has addressed this by presenting this study of desire and sexual politics in modern-day Tehran. It’s lovely to look at, and still rife with damning commentary on the continuing oppression of Iran’s women. —Tony Kay
Grand Illusion Cinema

Singer/lyricist Lalin St. Juste supplies the playful trill, and producer Akiyoshi Ehara sculpts the twisty but hooky beats. Together, they’re the nucleus of San Francisco-based groove collective the Seshen. Plus, we will continue to worship support act SassyBlack until the end of recorded time. —Tony Kay
Barboza

Inspired (or terrified) by hoarders and their labyrinthine temples to Stuff, Alice Gosti is wondering why and how we fall in love with useless things and experimenting with ways to engage in communal ritual decluttering. With experimental dance, of course! On Wednesday, she’s inviting people to come bring (give up) something precious, which will become embedded in the monolithic set she’s constructing for the weekend’s show. —Amanda Manitach
On the Boards

Multi-genre author Charles Johnson, whose novel Middle Passage won the National Book Award for Fiction in 1990, will discuss the plotting of a story and read passages from his recently published book on craft, The Way of the Writer: Reflections on the Art and Craft of Storytelling. The talk and Q&A, facilitated by writer Margot Kahn, will be followed by a book signing. —Sarah Galvin
Annex Theatre

Although John Luther Adams composes for orchestra and choir, his work is as close to classical classical music as Radiohead is to Buddy Holly. Commissioned by the Seattle Symphony and performed in public for the first time this Thursday, Adams’ latest work, Become Desert, will warp tempo and melody and even physical placement of players, complementing its ominous, prodigious, Grammy-winning prequel, 2013’s Become Ocean. —Jonathan Zwickel
Benaroya Hall

Martyna Majok is major playwriting talent, and I’m pumped to see this production directed by Kelly Kitchens and starring Alexandra Tavares. The piece, which shifts temporally, is set at a dingy bus stop where Polish immigrant Darja (Tavares) has spent a lot of time, going to and from various menial jobs, running to and from the men in her life. Runs through April 15. —Gemma Wilson
Seattle Public Theater

Take note: The Seattle improv community now has its own monthly zine, and we’re intrigued by this marriage of off-the-cuff performance and dead-tree comedy commentary. Wrangled together by the ever-entertaining Graham Downing, Comedy O’Clock celebrates the release of its inaugural issue with a show featuring Nudeprov, Book Club, Baby Jam and Momprov.  —Brett Hamil
Pocket Theater

This weekend several dozen bands local and national descend on the blue-collar burg of Everett to rock a walkable row of funky downtown venues, including the oldest continually operating theater on the West Coast. The fifth-annual Fisherman’s Village Music Fest features Shabazz Palaces, Kevin Morby, Karl Blau, the Seshen, Guayaba, Bread & Butter, SISTERS… the list goes on. And so should you, to Everett. —Jonathan Zwickel
Various venues

If you’re heathen like me but still wax a little sentimental about the liturgy and community of church, this goofy, boozy, cross-dressed, drag queen-infused secular Easter spectacle is your balm. Dress to impress and expect to leave sauced, sugar-high and enlightened. —Amanda Manitach
Century Ballroom