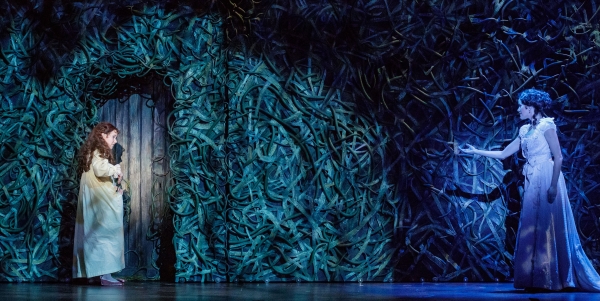 Frances Hodgson Burnett’s The Secret Garden was first released as a magazine serial beginning in 1910 and immediately had readers clamoring for more. Set during the British Raj, it had everything: an exotic, exoticized setting and characters that made way for a gloomy, Gothic British mystery full of death, love, grief and new life. More, please!

When Pulitzer-winning playwright Marsha Norman and Grammy-winning composer Lucy Simon turned the book into a 1991 Broadway musical, much was lost in translation—complex characters flattened, imagined worlds made dull flesh, literary subtext turned theatrical dialogue. It has since become one of those odd Broadway phenomena: a middling critical and box office hit-turned-beloved fan favorite over time, buoyed by distance and a few phenomenal songs.

For several years 5th Avenue artistic director David Armstrong has been working with the original writers to re-configure the show, a co-production with Shakespeare Theatre Company in DC where it premiered last winter. So, is it landing any better in 2017?

Yes and no. Armstrong directs and choreographs this story of young Mary Lennox (Bea Corley), living in India during the British Raj until her disinterested parents die of cholera and she’s sent to stay with her only living relative in a remote Yorkshire manor. Mary’s uncle Archibald is a rich, depressed “hunchback” (played by a handsome, hunch-free Tam Mutu), who rattles around his huge house haunted by the memory of his beloved wife, Lily (sung with ethereal ease by Lizzie Klemperer).

Lily is one of many spirits who linger in The Secret Garden; the moment after cholera wipes out Mary’s parents and everyone at their ill-fated dinner party, the whole crew pops back up, rendered stark white by a trick of Mike Baldassari’s glorious lighting. They roam about, serving as the show’s chorus, in direct contrast to the sprightly, full-color characters that inhabit the living world, led chiefly by cheery chambermaid Martha (the wonderful Daisy Eagan, who won a Tony for playing Mary in 1991), who handles the rude, bratty Mary with care and kindness.

Outdoors on the manor’s large grounds, Mary meets the gardener, Ben, and discovers her love for dirt. Indoors, she follows distant cries and finds her ill cousin, Colin, kept in bed on the orders of his doctor uncle, Neville (Josh Young, with a voice worth the ticket price). With the help of all her new friends, Mary finds and revitalizes Lily’s long-derelict secret garden, which Archibald ordered locked up after she died. They sneak Colin out until he’s strong enough to walk again, surprise Archibald with the healing, Mary is invited to stay forever. Ta-da!

This is an entirely exceptional cast—Young and Mutu sing one of the most luscious “Lily’s Eyes” I’ve yet heard, and I would follow Klemperer’s glittering soprano anywhere. Corley is a fabulous young singer and actress with great comic timing, though her “imperious” vocal affectation got gratingly repetitive as the show went on.

But there’s a lot that doesn’t make sense in 2017, none of which is too offensive on its own. But taken collectively, these issues beg the question: Why revive it? It may be set during the British Raj, which makes for kinds of colonialist problems, but did one of the Indian characters really need to be a snake charmer? Neville Craven is a mustache-twirling villain (as though being orphaned isn’t a good enough obstacle for a kid) who is given “dimension” by telling us he was also in love with Lily? And then there’s Lily herself, a sort of early manic pixie dream girl, an exuberant ray of sunshine who saved a grumpy older man with her love. And, for the record, I am very confused by this Dickon, who seems much older than the 12 years old he is in the book; now he’s just a quirky adult in a funny outfit who loves plants and talks to animals.

Outside of the gorgeous design (costumes by Ann Hould-Ward and gently abstracted sets by Anna Louizos), there’s something too heavy, too literal in much of this production. It neither leans into the innate camp of musical theater, nor treats it with the fairy-light touch required to make it feel real, which is the true alchemy of the art form. I remember thinking I was a genius for understanding the themes of this book when I was in second grade, so to have those themes spelled out so clearly to me now is jarring. It’s being shown all sides of a story at once, rather than letting us imagine them and revealing the truth of the situation later.

This show, which will soon take another shot at Broadway, is banking on a double dose of nostalgia in people like me, for a book that colored our childhoods and songs that scored our formative musical years. Trite or not, The Secret Garden still hits on our most fundamental hopes and fears, because stories of parents and children, love and death, grief and healing, are universal. The lilting motif of Lily’s “Come to My Garden,” Mary’s song to a robin confessing how badly she needs a place to call her own and talk to those she’s lost, beckon us back to the real heart of the story.