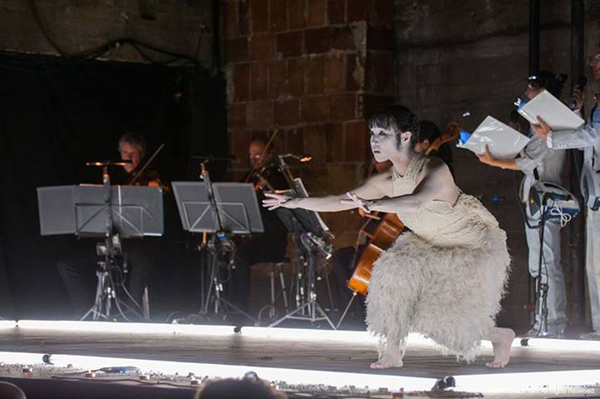 Earlier this week someone grumbled that Degenerate Art Ensemble always gets a free pass no matter what they do. Maybe that’s just sour grapes, but I wondered if it wasn’t a little accurate after seeing their recent performance at the Neptune.

I was one of the few dissenters in a crowd of people flooding out of the Neptune on November 26, gushing the praises of the Kronos Quartet/Degenerate Art Ensemble mashup. The concert commemorated the Seattle-born Quartet’s 40th anniversary. Kronos is one of DAE co-founder Joshua Kohl’s idols, so when Kronos’ David Harrington approached Kohl about a Kronos/DAE collaboration, sparks flew. Given I was basking in the presence of two artistic powerhouses, I expected the unexpected. That’s exactly what I didn’t get.

Of course Kronos Quartet was (as expected) a delight. Over the years, more than 800 pieces have been composed for the group, and they flexed their musical muscle for us for nearly two hours. They opened the first set with backs to the crowd, facing a large projection of a four-part score that scrolled along the wall, not unlike a Guitar Hero-style video game. A staff feverishly spattered with arcane squiggles, squares and zig-zagging crescendos made for an oddly satisfying, synaesthetic appetizer. Another highlight was the brief, breathless piece composed by Laurie Anderson that could’t help but summon the ghost of Lou Reed for a moment. The peak was a piece composed by Jherek Bischoff, who effortlessly stole the show. He played along with Kronos, his lanky body fitted with a sparkling tux, an electric bass slung over his shoulder. The piece: “semi-perfection,” someone noted.

The second set featured Degenerate Art Ensemble’s presentation of Predator’s Songstress in collaboration with Kronos. As the lights dimmed, white-clad vocalists planted in the balcony began a slow descent through the crowd, singing incomprehensible, melifluous vocalese. Once onstage, they stood stalwart, dressed like a future-choir with Blade-Runner-esque white stripes sprayed across the eyes, clutching mics and hand-held speakers while continuing to sing (“tell me how much tell me how much ma ma ma much”) for the duration of the 20-minute performance. Haruko Nishimura, DAE’s principal performer, danced, decked head-to-toe in her standard Butoh-inspired all-white, surrounded by a white-hot rectangle of flourescent tube lights installed front and center on the stage floor. Meanwhile, the Quartet was cordoned in a hindquarter of the stage while Joshua Kohl conducted from the side. Otherwise delightful components thus jammed doggedly together felt forced—an arranged marriage.

Of course, in typical art world fashion, while the praises blew up on Facebook the night of the performance, whispered criticisms trickled in. Having snatched the Guggenheim and other big prizes, is DAE resting on tenuous laurels? It’s hard being the big fish in a little pond. 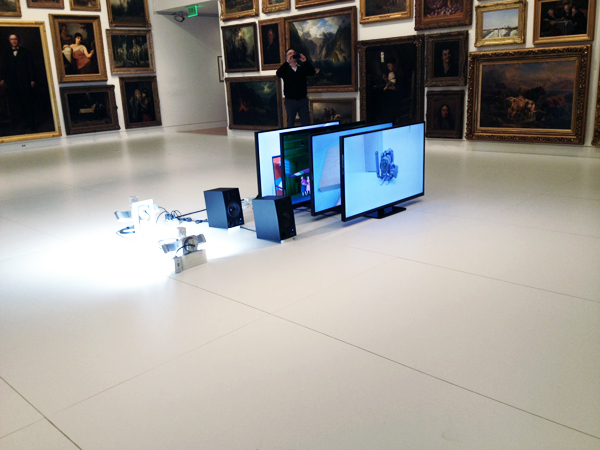 JASON HIRATA: Optium LH-3m
Last Thursday, Frye Art Museum unveiled Jason Hirata’s Optium LH-3m in the Greathouse Gallery as the third installment of the Frye Salon series—a program of contemporary installations meant to activate work from the permanent collection we might have grown lazy looking at.

On the heels of Joshua Kohl and Mark Mitchell’s emotional and ornate Salon installations, Hirata’s piece is a drastic departure. For Optium LH-3m he’s installed a clinically bright, white melamine flooring in the Greathouse Gallery, along with a pair of security floodlights, speakers and four LCD screens in a row. The cast is cold and retro-futuristic, but sets the turn-of-the-century paintings off. They pop, floating in an ultimate white cube. The four monitors, approximately the size of the average painting hung on the wall, are sandwiched so close you can’t properly follow what’s happening on the three in the rear. However, the videos gradually rotate on the screens, bringing content from the back forward, changing every two minutes or so.

Hirata is an interesting choice for Frye Salon. This is an artist whose practice is often so bizarrely hermetic and occulted, you’re usually questioning whether the audience is the butt of an emperor’s-new-clothes kind of joke. He’s passionate about photography gear, anime, YouTube and orchestrating slightly (or downright) awkward social interactions as part of his art. I once helped facilitate a project that involved soliciting strangers and offering them 50 bucks to embark on a real-time scavenger-hunt via text messages with Hirata, who lurked invisible like a puppet master on the edge of Cal Anderson Park. The goal of this game was to lure participants to a cooler in a parking garage that contained beer and cash. I got kicked out of Elliott Bay Bookstore for soliciting customers for him. Yet—astoundingly—he convinced a few people to play along. Whatever his works mean or accomplish, Hirata writes his own rules of engagement and participation. And he gets away with it. So even when they’re inscrutable or awkward, there’s a palpable sense of pleasure and mischievousness that seduces.

I could transcribe lengthy technical notes from the artist, overheard or provided in his statement, but I won’t. One visitor asked, “Is art successful when it has to come with an instruction manual?”

Technical footnotes groping for art-historical connections to minimalism, rhetorical loopholes (LH stands for “loophole”) and paradigmic shifts in art effected via technology contribute to Hirata’s overall gesture and represent his unflagging ability to dance around formal, institutional aspects of art while poking holes in them. But what makes the piece successful is its quiet, prolonged rhythm and its gradual reveal as something amounting to a prayer for flight. 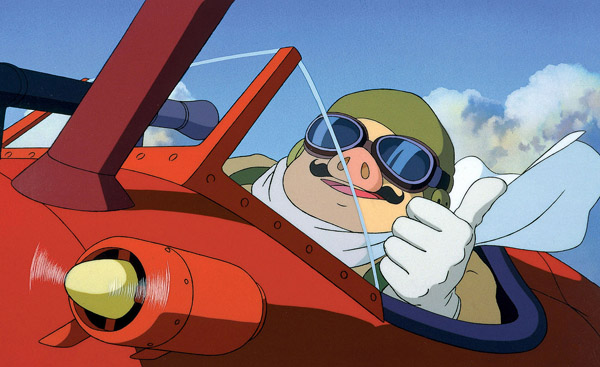 The longer you stay with Optium LH-3m, a very slow rhythm makes itself felt, particularly in the staggered rotation of the three videos making their way across four monitors. Scenes from Hayao Miyazaki’s 1992 animated film Porco Rosso play on one screen. They tell the story of a WWI-era, Red Baron-esque fighter pilot-turned-bounty-hunter-cursed-to-live-as-anthropormorphic-pig chasing “air pirates.” On other channels, we follow Support Rig Journey and Maintaining the Focus One, which at turns instruct the viewer how to operate a series of high-end lenses and at others have us following a stabilized hand-held camera through Hirata’s nondescript home in South Seattle—a place with minimal decor and bare, white walls. Eventually, the spidery-ness of Hirata’s unwieldy hand-cam stabilizer starts to resemble the fantastical armature of one of Miyazaki’s steampunk aircraft. Like them, it wants to take flight, but, of course, it’s tethered to Hirata’s hand. The camera floats through hallways. It hovers in front of a second-story window overlooking an enclosed backyard. It’s prevented from bursting out of the window, breaking free from both an actual and metaphorical hortus conclusus—the enclosed, medieval garden of the mind. Or of blurred vision. Or of history.

Meanwhile on the Greathouse Gallery walls, the lowing, sun-kissed cattle, the aged chess players, the doe-eyed girls and martyred vixens all hover in their own right, fixed and unmoving. Hirata’s melamine glow illuminates of whites of eyes in an unusual way. You imagine flying upward to meet them…. 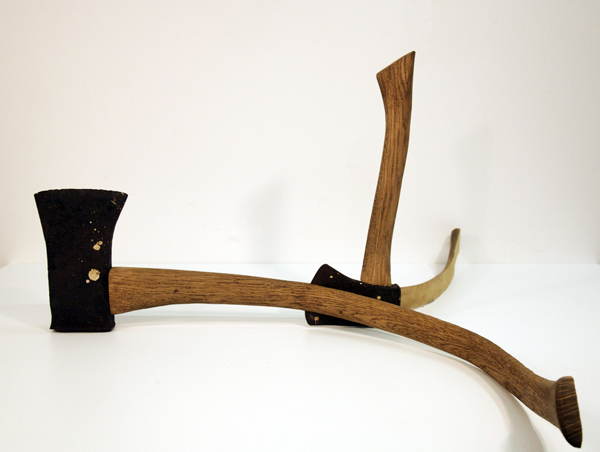 Jannausch hand-carves all these wilted handles, using fresh-cut white oak with high moisture content, then steaming and bending them into odd shapes. 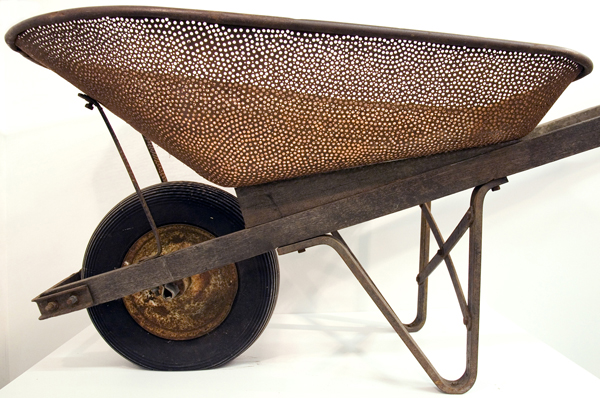 The resulting tools, on first glance, pack the absurd punch and awkward sexual innuendo of many a Surrealist masterpiece, like Meret Oppenheim’s famous fur saucer and teacup. This raiding of the toolshed for readymades finds all sorts of precedents: It echoes the cruel playfulness of Man Ray’s Cadeau (a clothes iron, the bed of which has been studded with nails), or more recently, SuttonBeresCuller’s bronze outlets, light switches, bulbs, mops and other utility objects rendered useless and elevated with a wink to the extremities of art market commodification to precious, sculptural objects by means of bronze casting.

The alterations are more than just a means to a punchline or the ratted tail of a psychoanalytic snarl, however. Jannausch has worked as a builder and laborer for many years. Callus is an homage to his longstanding, creative partnership with tools, a nod to a fruitful co-dependency with them. (The callus is, of course, the manifest evidence of that relationship.) It’s also a release. By warping and altering the tools—by making them other—Jannausch frees them from their servitude. Uselessness is key to their autonomy as objects. Anthropomorphized, they become key players in these intimate, inanimate melodramas, as rife with comedy, failure and weakness as any of us.