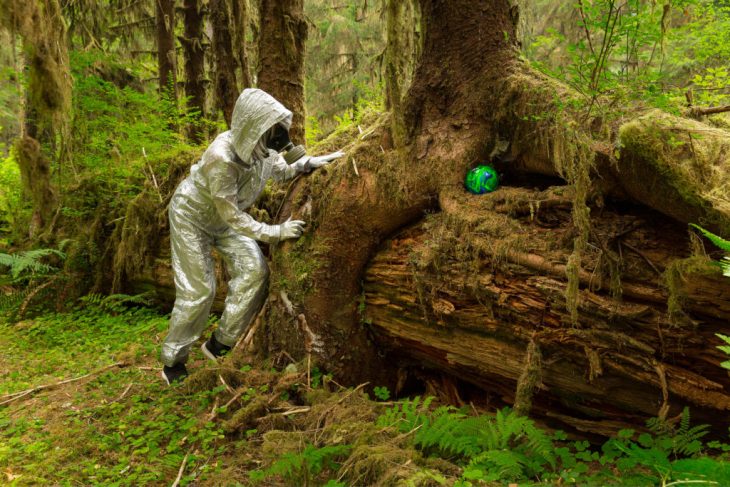 Caela Bailey in Who in the World Are You?

Caela Bailey’s voice is worth this price of admission, but you better believe she’s bringing a lot more than that to this one-night-only blowout, an autobiographical journey running from her circus childhood to her current creative crossroads. It’s got music, storytelling, video and comedy—and Bailey, a glorious presence her own, attracts great creative collaborators like moths to a flame. —Gemma Wilson
Triple Door

The Magic Hat comes close as a comedy show can get to what anarchist poet Hakim Bey called a “temporary autonomous zone.” Host Emmett Montgomery books a few established local comics and the rest are drawn out of the titular hat. Performances can include: a woman who plays a game called “smell it and tell it,” a flea circus, a character called “Pizza Mermaid.” —Brett Hamil
The Grotto at the Rendezvous

November and Before We Vanish

Back in 1997, the genre-flouting, crate-digging Japanese enigma known as Cornelius released Fantasma, an album that catapulted him to international underground acclaim. Twenty years later—i.e. last year—and after remixing songs for the Beastie Boys, Blur, Beck and many bands that don’t start with the letter “B,” Cornelius released Mellow Waves, another bifurcation in his meandering stream of ambient, experimental pop, upon which he’ll surely put a surreal spin tonight. —Jonathan Zwickel
Showbox

Etsuko Ichikawa makes art that’s delicate with an underbelly of darkness and danger—like her glass pyrograph drawings made using molten glass to burn marks directly onto paper. Now, tackling the subject of nuclear disaster and remnants left behind, she’s playing with uranium, creating glass sculptures with the radioactive material that literally glows under UV light. (Don’t worry, they’ve been analyzed and certified as not posing a significant health hazard when handled!) —Amanda Manitach
Winston Wächter Gallery

Teaching artists have the kind of immediate impact most other artists can only dream of, although they don’t always get as much space in the spotlight. For its 40th anniversary, Pratt Fine Arts Center honors its 300 former and current teachers with a sweeping show at BAM. Still on the fence about going? Let a public panel with beloved artists-teachers Juan Alonso-Rodriguez, Marita Dingus, Preston Singletary and Cappy Thompson lure you to Bellevue. —Margo Vansynghel
Bellevue Arts Museum

SF trio The Meices were one of those great ’90s indie bands cut from the same worn flannel shirt as Hüsker Dü and The Replacements. Local boys Alcohol Funnycar sprang from a similar launching point (their 1995 record Weasels remains one of the era’s overlooked gems). And damned if both bands can’t still kick up a storm live. —Tony Kay
Sunset Tavern

Tara Hardy—founder of Bent, a writing institute for LGBTQ people in Seattle, whose most recent poetry collection My, My, My, My, My won a 2017 Washington State Book Award—reads with Julene Tripp Weaver, who worked for 21 years in AIDS services and whose book Truth Be Bold—Serenading Life & Death in the Age of AIDS has been nominated for the 2018 Goldies, the awards bestowed by the Golden Crown Literary Society. —Sarah Galvin
Open Books